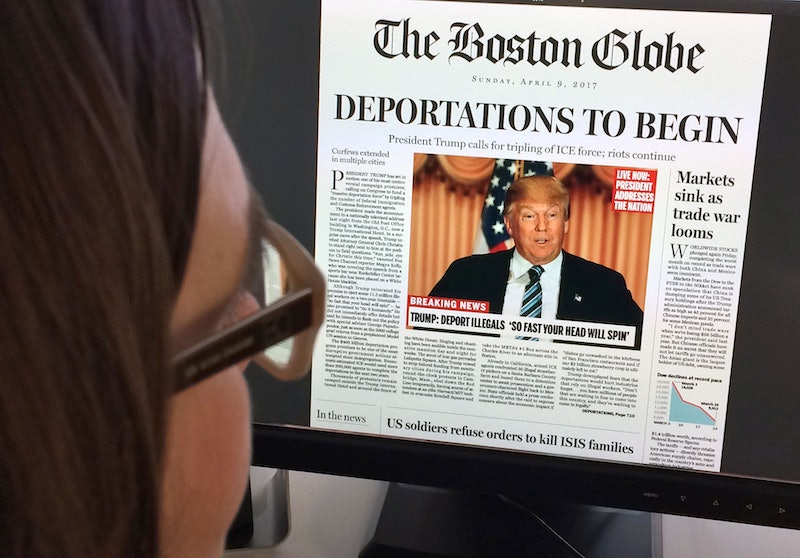 It may only be August, but 2016, like many years preceding it, has already given women ample reason to know that we have not exactly achieved gender parity. Being a woman, even in a developed country like the United States, is far from easy, and these 12 news headlines show why it takes strength to be a woman in 2016.

Whether it's at the Olympics or at the Republican or Democratic National Convention, whether you're an actress, a mother or just a woman riding public transit, there is truly no reprieve from the rampant misogyny that sexists spew our way.

Because it's 2016, exposing the myriad ways sexism manifests itself toward all women is crucial. Sexism is often employed in tandem with racism, transmisogyny, and ableism, and sometimes combinations of these "-isms" are used to further cut down women who already experience other forms of identity-based violence. If nothing else, I've learned that increased visibility can be dangerous for members of the most marginalized and vulnerable communities, and 2016 is nothing if not a study in the ways visible inequality can harm rather than help those who experience it.

Below are 12 headlines that highlight just how difficult it still is to be a woman in 2016:

A Terrible Year For Domestic Violence

This year has been a landmark year for domestic abuse headlines due to Amber Heard's allegations that her now ex-husband, Johnny Depp, abused her. Although much of the coverage was supportive of Heard, this Daily Mail headline about Heard points out the disgusting way women who allege abuse are treated. Because apparently, if you've been attacked by your spouse, you shouldn't smile or have fun afterwards.

Of course, not every domestic abuse story ends in a multi-million dollar divorce settlement given to charity. This Huffington Post headline is about the tragic story of Megan Short, who realized she was being emotionally abused and was then killed, along with her children, by her husband on the day she planned to move out. Abusive relationships of all kinds still exist in 2016, and they still turn deadly at alarming rates.

It doesn't take much to find headlines that exemplify the very real effects of misogynoir, or sexism that is specifically aimed at black women. The seemingly racist scandal following the death of Harambe the gorilla is exemplified by this CNN headline that shows a prosecutor saying that Michelle Gregg, the mother of the young boy who fell into Harambe's enclosure at the Cincinnati Zoo, won't be charged. The fact that over 500,000 people signed a petition for Gregg to be charged suggests an underlying bias against black mothers that can't be ignored.

These two headlines about the state of black women in the criminal justice system are an often-overlooked part of the conversation about police brutality against black people. The first headline comes from HelloBeautiful in an article about an unnamed female inmate in Louisville, Kentucky, who appeared before a judge without pants, causing the judge to look into the poor treatment of women in the correctional facility where she was held. The second is from a study earlier this month that found that black women are the fastest-growing jail population, and that they are often placed there for minor offenses.

The ongoing abuse against Leslie Jones is perhaps the most visible scandal to shock readers into an understanding of misogynoir. This Slate headline discusses the most recent attack against Jones, but she's had to overcome abuse for much of the late summer, simply for being a black woman in a major film.

Transmisogyny At An All-Time High

Transmisogyny differs from transphobia in one important way: While transphobia is the hatred of all transgender people, transmisogny is the explicit or implicit fear of trans women, often couched in anxious terms about trans women being "men masquerading as women." These headlines show the manifold mistreatment that trans women experience:

Earlier this month, Rae-Lynn Thomas, a black trans woman, was murdered in Ohio, and became the fourth black trans woman murdered within a six-week time span. The above headline is from AutoStraddle.com. Some are rightfully calling the murders of and violence against transgender women "an epidemic." The pain and fear experienced by trans women, and particularly by trans women of color, is unreal.

In May, Pearl Love, a trans woman and activist, posted a video of a cis woman spewing hatred at her on the subway. The subject of the video spoke out after the video went viral about how she'd had a "bad day." This headline from Advocate.com proves not only that being visibly trans in public is dangerous, but that some of the violence comes from other women.

And Then There Was The Olympics

Because the sexism aimed at women is nothing if not intersectional, this Washington Post headline from the beginning of the Olympics shows that being a trans woman athlete can be an impossible double-edged sword. To be on that large of a stage and be open and proud of who you are is amazing, but it certainly can have its pitfalls — like major speculation that one's birth sex assignment might give them an "unfair advantage."

It was difficult deciding the most sexist headlines from the Rio Olympics, but this controversial headline from the Chicago Tribune about trap shooter Corey Codgell was definitely on the medal podium.

When I look back on the Olympics, one of the most glaring examples of sexism came during the Egypt-versus-Germany beach volleyball game, which featured the Egyptian team in covered-up uniforms (and one player in hijab), while the Germans played in bikinis. Rather than being a "massive cultural divide," this showcased the amazing diversity inherent in the Olympics. Too bad the editors who wrote this headline for Daily Mail didn't see it that way.

And, Of Course, There's Hillary Clinton

While much digital ink has been spilled on the sexism leveraged against Hillary Clinton, this AJC.com headline didn't even need to mention the Democratic nominee by name to invoke the sexist hoopla surrounding her image at the RNC. I regularly criticize Clinton for myriad policy-related reasons, but watching Chris Christie and the speakers that followed him at the RNC lead the crowd in chanting "lock her up" was, frankly, terrifying.

Who knows how many more screenshots of sexist headlines I'll have saved in a folder by the end of 2016? For now, I've got more than enough reason to know that being a woman in this political and social climate is tough work.