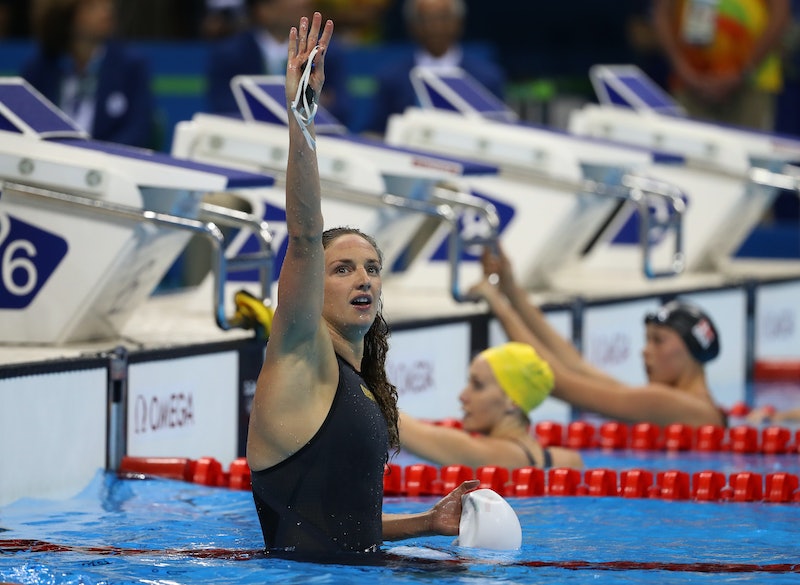 If you've been following the media blitz surrounding the Olympic Games in Rio, you probably already know a few things about this year's competition — like that Simone Biles is poised to absolutely destroy, Michael Phelps will keep winning gold medals long after the sun has consumed the earth, and sexism is still alive and well in professional sports coverage. Of course, I don't want to let the sexism overshadow the fact that in many ways, 2016 is a ground-breaking year for female athletes; Team U.S.A. now has more female than male athletes, with a record-smashing 292 women on board (compared to 263 men), and those female athletes are favored to bring home more gold than their male counterparts. A number of individual female athletes are also having phenomenal times, from the afore-mentioned Biles's practically perfect vault, to Uzbekistan's Oksana Chusovitina, who qualified for the vault finals at 41, making the seven-time Olympian the oldest woman to ever participate in the Olympic Games.

But you might not pick up any of this from a quick skim of some of the headlines about female Olympians. When Hungarian swimmer Katinka Hosszu set a new record in the 400m individual medley, winning a gold in the process, an announcer quickly credited her husband/coach as “the guy responsible for turning Katinka Hosszú, his wife, into a whole different swimmer.” The Chicago Tribune celebrated Chicagoan Corey Cogdell-Unrein's bronze medal in trap shoot won with a tweet that didn't mention her name, but did mention that she's married to a Chicago Bear. Countless headlines and articles have focused on the fact that medal-winning swimmer Dana Vollmer just became a parent — a fate that has not befallen fellow swimmer and new parent Michael Phelps. A number of adult female competitors have been referred to by commenters as "girls." Some media professionals have claimed that female viewers don't watch the Olympics for the actual competition, but for the melodrama.

Sadly, these sexist moments line up with research findings about sexism in sports coverage. A study on gender and language in Olympic sports writing, conducted by Cambridge University Press, yielded results that will make any sports fan, feminist, or, frankly, any decent human being reach for their headache medicine: male athletes are discussed in the press two to three times more often than their female counterparts; "[l]anguage around women in sport focuses disproportionately on the appearance, clothes and personal lives of women, highlighting a greater emphasis on aesthetics over athletics;" and terms like "aged," "older," "pregnant," "married" and "un-married" only seem to pop up in media descriptions of female athletes.

This surprised me. I'm embarrassed to say that this surprised me, because I'm a feminist — beyond that, I'm a feminist who is on the internet all day, so I have deep, intimate knowledge of the fact that some people still think that women are basically vacuum cleaners that you sometimes have sex with. Yet despite constant personal exposure to commenters who are eager to lovingly critique my body/ face/ intellect/ perceived sexual ability/ tendency to use "like" as an interjection, I, like a lot of people, secretly believed that feminism's hardest work was already done. We have a woman on a major presidential ticket! We have women on the Olympic podiums! We had women in Ghostbusters, dang it! Surely the finish line must be within reach! Surely there are only a few lingering neanderthal-types who believe that women are, truly, less than when compared to men, right?

I'm not saying things don't seem, on the whole, to be getting better and better for women, in the U.S. and elsewhere, in countless ways. We're more aware of sexism everywhere from the workplace to our sex lives; women today are more like to believe they're able to rely on themselves financially, and more likely to have a college degree than their male counterparts (compare this to 1940, when men were almost twice as likely to have a college degree). Feminism has changed so much, from rates of violence against women to making gender-based discrimination a legally actionable offense.

A 2014 YouGov poll of 1000 U.S. adults found that 35 percent agreed that sexism was "a moderate problem" in the country — a figure that beat the 29 percent who called it "a big problem," but dwarfed the 12 percent who called it "not a problem at all." That's progress — but it's not completion. We're doing ourselves and everyone else a great disservice if we take these wins to mean that feminism has won, period. Because we're not done. Things are better, but 51 percent of women reported in an NBC poll this year that they've experienced gender-based discrimination. Things are better, but women between the ages of 18 and 34 are still at greatest risk of experiencing domestic violence. Things are better, but women of all races still earn less than white men for the same jobs. It's easy to forget this stuff during our day-to-day lives, when we're seeing so many awesome signs of women's progress. It's important to celebrate every win. But it's also important to remember that the fight to end sexism — like the fight to end any kind of discrimination — is not over, no matter how many women we see on our TV screens or have voted into office. Sometimes, it takes moments like these sexist Olympic comments to remember that we've won a lot of fights when it comes to sexism — but we have not yet won the war.