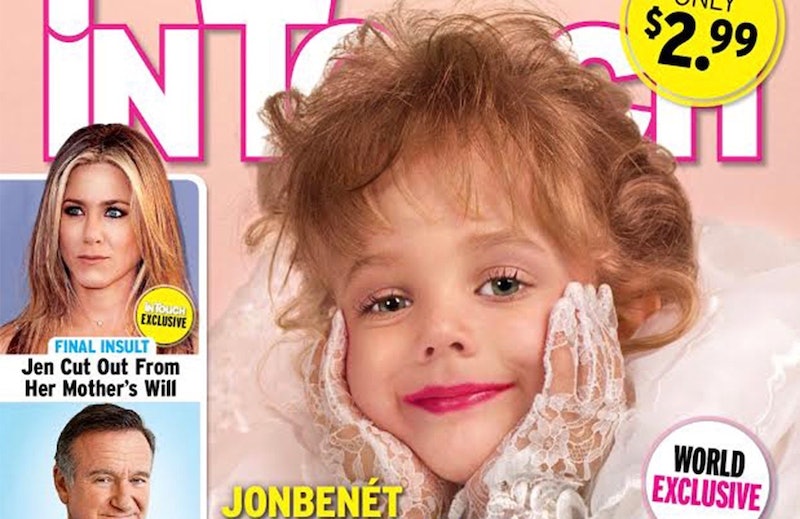 This year appears to be the renaissance of the JonBenet Ramsey case. In case you're too young to know or were living under a rock at the time, Ramsey, a 6-year-old beauty queen, was found murdered in the house of her wealthy parents in Boulder, Colorado, 20 years ago, in 1996. The ensuing bungled police investigation, media free-for-all, and years of misplaced suspicions and rejected suspects has never led to an arrest, and for many, Ramsey symbolizes a particularly dark side of the '90s. It's all coming back now, as CBS, A&E, and Discovery are all airing documentaries on Ramsey's life over the next month. It's a chance for everybody to reflect, and to wonder: just how different would it be if JonBenet's murder happened in 2016?

American news has changed significantly since Ramsey's death, as has the entertainment landscape in general. We can't predict that the death would hold the same fervor for the public as it did 20 years ago, but if it did, there are certain paths open that didn't exist at the time of the original crime, from smartphones to the power of Twitter. It's also pretty pointless to hope that we'd be "better" in our reactions or more moral in our perspectives, though I do hope there'd be a more open discussion about gender, race, and the media. Also, it would be inevitable that Trump would say something gross about it. That you can absolutely count on.

Here are five ways in which the JonBenet Ramsey case would differ if it happened in 2016, from the obvious to Pokemon gyms.

Then: The Case Took Over The News Cycle

Almost every piece looking back on the JonBenet case involved the words "media frenzy." At its peak, thousands of column inches and hours of TV coverage were devoted to the case, likely due to a couple of hot-button issues: the confusing evidence, the lack of an easy suspect, the fact that JonBenet herself was a good flashpoint for discussions of sexualizing children (those beauty queen pictures!), and a good old-fashioned tendency to celebrate bloody, glamorous gossip.

Now: People Would Get More Indignant About The Attention

People in 2016 are a lot more tuned into the fact that mainstream Western media focuses predominantly on white voices, white stories, and white victims. (Witness the outrage that Facebook didn't offer a chance for users to overlay their profile pictures with Lebanese flags as they did with the French one, following terrorist attacks in both countries.)

If the JonBenet Ramsey murder happened today, there would be an onslaught of attention, immediately followed by reasoned, brilliant think pieces in places like The New York Times by Roxane Gay and Laurie Penny about why we prioritize the deaths of small, wealthy white girls over poor girls of color, what this says about our notions of vulnerability and protectiveness in race, and how structures of power determine what holds the media's attention. Inevitably, #AllLivesMatter would get hold of it, too. If anything, though, the perspectives would just add to the media frenzy, with 24-hour news channels holding debates and expert panels on just how and why they should cover the case.

Ah, those were innocent times. The Baltimore Sun reported in 1997, as the news hysteria was in its most white-hot stage, that CBS, in an attempt to get the scoop on its rivals and let people know what the "scene of the crime" looked like, paid $4,000 (around $6,500 in 2016) for a VHS video of the house dating back to 1994.

How we get news has changed significantly since 1996. Video, good-quality images, and other recording devices are now in every smartphone, even completely dismal ones, and that's where the public would be able to satisfy their curiosity. Media organizations wouldn't be the only source of pictures and videos; interested parties would post videos of themselves outside the Ramsey house, commenting on press conferences, taking candid shots captured of the family and police, and elaborating on them endlessly.

A particularly good one might be bought exclusively by a news channel, but mostly people would be doing their amateur reporting purely for free. The inside of the house would be nabbed from real estate agent websites, obviously. Oh, and yes, people would take selfies in front of the house, sparking a public outcry and an upset news conference. (There would also be a brief moment in which the house was a Pokemon gym.)

Around 25 locals, on the one-year anniversary of the discovery of JonBenet's body, apparently gathered for a poignant candlelit vigil in Boulder, Colorado, according to The Washington Post.

In 2016, the public's ability to participate in and commentate on the case would come to a head on Twitter, with hashtags like #StandWithTheRamseys, #RIPJonBenet and #WTFBoulderPolice. (Facebook would also ensure that any vigils, if they happened, would be much better attended.) The social media pages of any interested or related parties would rapidly get flooded by trolls and angry anonymous commenters, the homepage of the police force would likely be hacked, and businesses would get themselves into trouble by trying to make light of the tragedy on Twitter or Instagram for publicity. Somebody would start a GoFundMe for the Ramseys, and then have to take it down after the page faced repeated denial-of-service attacks.

Then: The Tabloids' Voracious Appetite Came Under Scrutiny

The tabloid participation in the Ramsey case now lives in infamy: they accused everybody and anybody (including the Ramsey's son, which led to a defamation case that the Ramseys won), and a Globe reporter apparently was allowed exclusive access to the office of the Boulder District Attorney for scoops.

Accessing the private information of individuals has now become something of an online sport. In 1996, a lot of tabloid journalism would involve in-person investigation, trawling through paper and hunting for photographs; but not so now. Entertainment sleuths TMZ would get deep into the Ramseys' business, finding everything from old receipts to disgruntled former workers to Facebook photo tags and browsing histories. The Smoking Gun would know every legal development almost before the police did, and a complete legal history of everybody involved in the case, including parking tickets. But they wouldn't be on their own; somebody would screenshot a person of interest saying something unwise on Twitter back in 2004, leading to John Oliver doing a despairing segment on privacy.

Then: A False Confession Derailed The Media

In 2006, in one of the most bizarre episodes of a frankly odd murder case, John Mark Karr confessed to murdering JonBenet Ramsey (prompting apologies from major media companies to Ramsey's parents, who had been frequently implicated and pilloried in the press), only for evidence to come out that he had no DNA match to the crime scene and could not have been there in the first place. What Karr was up to remains unclear, but what looked like a decade-late solution instead turned into another complicating factor.

Now: Conspiracy Theories Would Be Even More Prevalent

Nobody does misinformation, confusion, gossip and apparently-legitimate rumor like the Internet of 2016. One false confession? Amateur hour. People would swear up and down that a suspect had been put up to it, that a confession had been found in the house, that a Photoshopped picture of a Facebook post confirming a DNA result was real: it would be chaos, and the "reality" would be even trickier to determine than it was in 1996. And that's not including the people who'd decide it was a government conspiracy or something to do with the Illuminati. The fervor would die down, only to reignite when somebody in the media circus went on Dancing With The Stars.