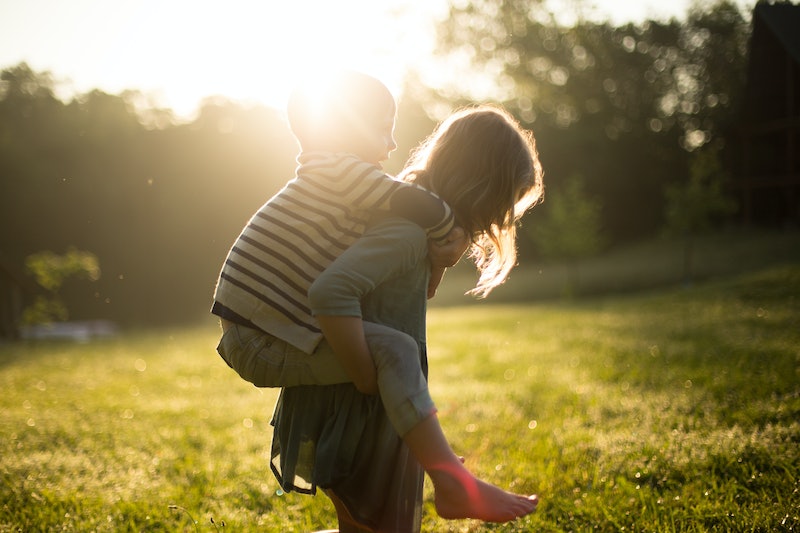 In a perfect world, nobody would have to make a conscious effort to break down gender norms in their family; it would just happen naturally, like the world's collective crush on Simone Biles. (A perfect world would also feature coffee that flows like water and hangover-free wine.) Unfortunately, it's not as easy as it sounds. Even if you grew up in a feminist household, the gender binary gets to all of us young, and it takes a fair amount of dedication and self-reflection to counteract its effects. If you have siblings, think about the differences in the way your parents raised you — were girls expected to play dress up while boys were shooed outside to train magnifying glasses on ants? You can thank the patriarchy for that one, along with dress codes, the "pink aisle," and a whole range of other fun ways we're stuffed into an unnecessarily gendered box.

It's irritating at best and downright harmful at worst, but there's some good news: It's more common to question gender these days. According to a 2014 study, more than two thirds of young people today agree that gender doesn't have to define a person the way it did in the past. Furthermore, the rise of mainstream feminism can only help in the long run. If you're looking to tackle gender norms in your family life — and I'm assuming you are, since this article's purpose is pretty clearly laid out in the headline — here are five places to start.

In gender norms were more logical, when more women started making their way into the American workforce (again), men would have started sharing the load at home. Unfortunately, anyone with minimal powers of observations knows that's not exactly what happened. Rather than dividing housework and work-work equally among partners (in a traditional heteronormative household), the brunt of chores like laundry and cleaning still fall to women, whether or not they have a job. Although the amount of housework done by men has risen since the '70s, research shows that even today, women shoulder the majority of domestic labor. According to a study published just last week, many see no problem with this; researchers found that around two-thirds of survey respondents support the traditional division of chores.

It's obvious how this unequal distribution of labor perpetuates and reflects the devaluation of women's work, but there's an easy solution: Divide chores equally among your family. Men shouldn't sit back and let women do their laundry any more than women should rely on men to take care of the yard. Even aside from helping break down gender norms, I guarantee the knowledge will prove useful in the long run.

Breadwinner moms may be on the rise, but cultural norms have yet to catch up. Men face enormous pressure to provide the primary income for a family, while women are expected to put their careers on the back burner if necessary. Dozens of factors go into household finances, and there's nothing inherently wrong with men bringing home the proverbial bacon. (Considering the wage gap, it's not unlikely that men in heterosexual relationships might make more money than their partners.) It's worth noting that most families rely on more than one income, but if you have to choose, don't automatically assign stay-at-home status to a woman just because that's what we're taught to expect.

In the same way that household chores are still considered "women's work," the brunt of childcare is still left up to women. Although that's slowly changing, it can't hurt to emphasize the importance of fatherhood in your family — despite the popular belief that mothers are the most significant figure in a child's life, fathers are equally important.

The subject has been talked to death online, but it bears repeating: Children's toy choices are needlessly gendered. When girls are taught to gravitate toward feminine pursuits like clothes and dolls, and boys toward action figures and toy trucks, it's no surprise that gender divides persist in many professions. If you're trying not to uphold gender norms, the toy section is one of the easiest places to start.

Why does anyone care about the difference between men's and women's clothing? It's totally arbitrary; for example, as you may already know, pink was traditionally a masculine color until fairly recently. Take a cue from the Smith School of Parenting a let kids express themselves how they want, whether it's a boy wearing a skirt or a girl shaving her head. Who knows? Fashion is so subjective that they might just start a trend.

More like this
Why You're Seeing Green Bandanas At Abortion Rights Protests
By Lexi Inks
How To Fight For Reproductive Rights, Based On How Much Time You Have
By Courtney Young
5 Ways To Stand In Solidarity With Women In America From The UK
By Sophie McEvoy
How To Come Out Online, According To Trevi Moran
By Melanie Mignucci
Get Even More From Bustle — Sign Up For The Newsletter