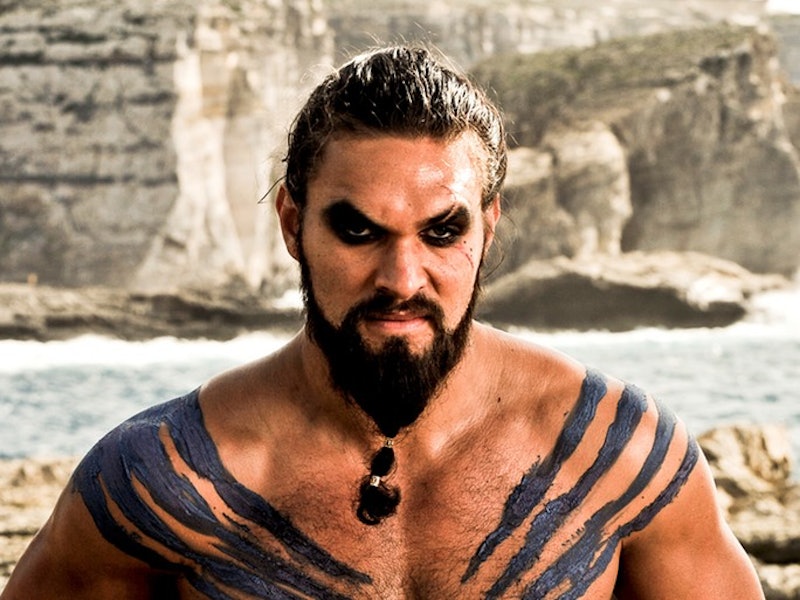 The more I think about it, the more I'm convinced that Jason Momoa is coming back to Game of Thrones to once again play Khal Drogo. Aside from the (very) obvious signs, courtesy of Momoa's plethora of Instagrams that show him whooping it up with the Game of Thrones showrunners, there's a few other factors at play here. Everyone's favorite fantasy show is entering into it's penultimate season. As such, the show will probably start juggling the completion of major character arcs (like Arya's revenge quest) as well as peppering in some huge surprises, including surprising character deaths. But you probably knew that, right? An impending White Walker invasion from the North and the arrival of Daenerys with her fleet of Dothraki, Martell and Tyrell forces from the East means that Westeros is about to get all kinds of shaken up; a surprise return from the dead would be amazing.

Khal Drogo's return would be a different kind of special. His return would not only directly serve Daenerys' plans to take over Westeros, but he would possibly achieve a god-like status akin to the one Jon Snow is currently enjoying (albeit Jon's is on a minor level). Furthermore his return would confirm a long-held prophecy, a prophecy that would be just the right kind of switch-up for Game of Thrones. If that isn't enough to get you interested, just ask yourself whether you want to continue to live in a world where you can't, on a weekly basis, delight in Khal Drogo's brooding hotness as he goes out to conquer the world with Daenerys. Don't we all want that again?

With the evidence mounting that Khal Drogo could actually return as an epic character from the Game of Thrones books, let's take a moment to examine what his return would mean for the show:

Death Is Not Permanent

We've seen it with Jon Snow and we would definitely see it again with Khal Drogo if he came back. Death would definitely not be as permanent an act as the show's characters would like to believe. Sure, there's the minor caveat that it's not permanent when the right kind of person is trying to reverse its effects, but you get my drift. With Melisandre currently riding in shame south towards King's Landing, she's not only equipped to bring back another dead character, but she still needs to bring back Azor Ahai, her one true goal in this show. Her character arc would be completed in bringing Khal Drogo back.

Khal Drogo's return would prove that death is an obstacle, not a sentence. It would also give credence to the existence and use of magic but way of Melisandre's use of it; a possible factor in bringing her back into Jon Snow's good graces, perhaps? Even more intriguing, if Jon Snow and Khal Drogo can trump death, does that mean that other characters could return from the dead?

Daenerys Could Be Saved...Or In Serious Trouble

Daenerys would have her world literally rocked if Khal Drogo came backed, in every sense of the word. She resigned herself to marrying again but only as a power alliance. Believing that her great love is dead, having him return from the dead once again would be overwhelming (but hopefully in a good way) for her. Also, his return from the dead could possibly render him stronger than before, an idea further bolstered by the Azor Ahai theory. He could be an asset to Daenerys' mission to conquer King's Landing. Bonus: his return would allow Daenerys to open up her heart again and reunite with him, helping to prevent her from becoming like her father.

The one setback is that is Azor Ahai is Khal Drogo, Daenerys could be the counterpart to Nissa Nissa, Azor Ahai's wife that he had to sacrifice in order to defeat the Great Other. Daenerys could be in real trouble if the sacrifice part still rings true the second time around. But you have to admit, an unexpected death like Daenerys' would fit in so well with the shock value of Game of Thrones (*Insert sad face emoji here*).

Khal Drogo Could Be Responsible For Saving Westeros

With any luck, Daenerys could put the pieces together that she and Jon Snow are related, thus allowing them to join forces for the inevitable White Walker invasion. With the King in the North and the Mother of Dragons together —and Khal Drogo as Azor Ahai by her side—the chances of the White Walkers taking over Westeros would be incredibly slim. We, the viewers, have been preparing from Jon and Daenerys to meet; could they meet under these circumstances? Khal Drogo's knowledge of warfare strategy from his first life would be a distinct advantage. Teamed with his wife and new ally, the White Walkers would be toast.

It's Not Canon, So Why Not Bring Him Back?

Season 6 marked the divergence between the show and the book versions of Game of Thrones. We're now officially off the beaten track. Khal Drogo's return could actually be possible because it is not canon. As such, his return to the world of the living would greatly affect those around him. He could ultimately help people like Daenerys and Jon Snow achieve their dreams of reclaiming what they have lost and what they secretly want most. On an emotional, narrative and even political level, Khal Drogo's return is a wild card. A fun wild card, to be precise. His inclusion in these grandiose power schemes could help shift the balance of power within the show and away from what fans of the books are expecting.

Basically, we need you back, Khal Drogo. We miss you. It's time. Please send Melisandre some messages from beyond the grave that you'd like to come back to us ASAP.