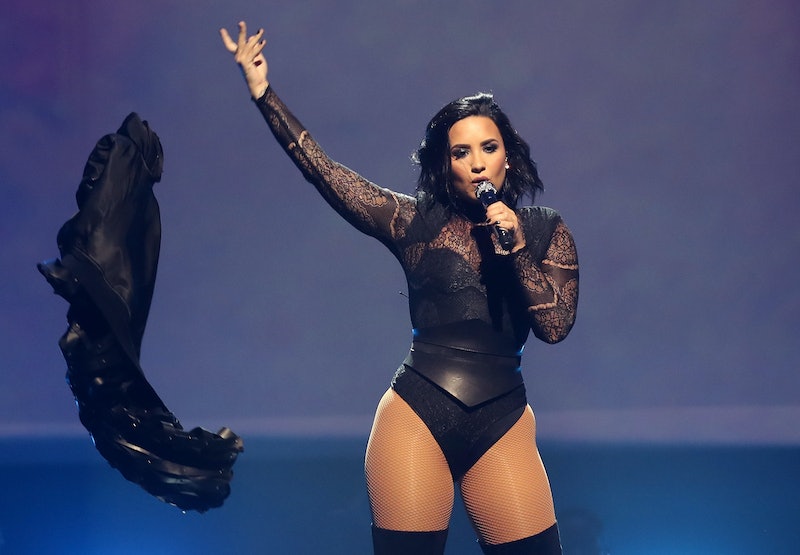 Since she positively killed it at the 2015 MTV Video Music Awards, I have to say I was pretty excited to see what Demi Lovato's 2016 VMA outfit would be like. On last year's red carpet, the singer rocked probably the coolest look ever — a short, pink, long-sleeved dress with geometric cut outs. And slicked back hair. And flawless makeup. It was perfection.

After gracing the red carpet with such style, she probably could have just gone on home for the night. But no. She took it to the next level and got on stage for her first ever VMA performance, and sang the hit "Cool For The Summer." Iggy Azalea appeared out of nowhere to rap, and some dudes danced around in colorful Speedos. (You know, no big deal.)

But despite all of that, the focus still obviously on Demi, who was rocking a black and purple glitter one-piece and thigh-high boots. The singer, in all her infinite coolness, then surfed across the crown on a pool float.

Unfortunately, Demi wasn't schedule to wow us with another performance this year, and she even skipped out on the red carpet. The singer, who is up for Best Rock Video with Fall Out Boy's "Irresistible," tweeted a hint that she'd be watching the show from home.

That's OK, Demi. Everyone needs a chill night. We hope to see you next year!