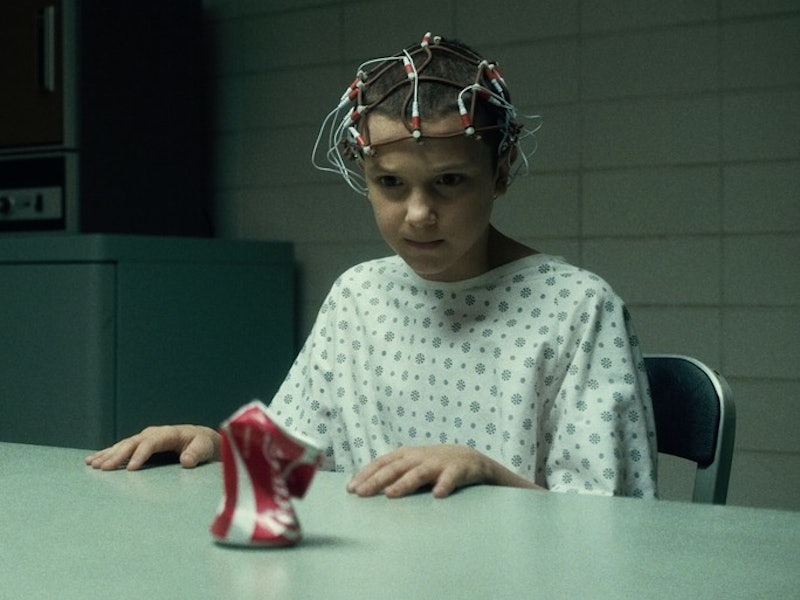 After meeting Eleven, Dustin, Barb, and the rest of Stranger Things' cast of unforgettable characters, moving on is about as easy as finding your way out of the Upside Down. If you have theorized about the series until you gave yourself a nose bleed and rewatched the episodes so many times your friends are practically begging you to watch something else, then it is time to move on to the Stranger Things game. Yes, there is a Stranger Things game and it is the perfect way to wile away the hours until Stranger Things Season 2 arrives.

The game is a fan tribute from indie game makers Infamous Quest, and it is an '80s throwback in all of the best ways. Right now, there is a short demo available featuring Hopper in the woods with his deputies and Mr. Clarke as they look for Will. While the free desktop game is completely unofficial, game designer Steven Alexander would love to expand the game to represent the full breadth of the Stranger Things world.

In an interview, Alexander told Wired UK if the Duffer Brothers come calling, he has a plan for a large scale, click-through game just waiting to be made. "I wrote up a whole design doc, did research on the locations in the show, mapped out ideas. The game would, in my design, have several player characters. In the demo, you play as Chief Hopper, but I'd imagine being able to play as Mike in another storyline and Nancy in another. You'd play as them separately until the stories converge," Alexander told Wired.

For now, the demo should be enough to keep fans engaged during the wait for a Season 2 announcement. The game looks like it was dropped straight out of the '80s with its minimal design and click-through functions. It plays like an old school story-based game. As Hopper, you explore the woods by clicking around with your mouse. The game is just as wry as anything you would find in the early days of game development. For instance, if you click on a rock, a message pops up telling you it is a "big rock."

There are easter eggs hidden around the forest for those who are up for a bit of exploring. Take a peek inside the drain leading into the military research facility for a flawless shout out to the show, and prepare for a surprise during the end of the credits. Also, I know this sounds weird, but you have to offer Mr. Clarke a cigarette — just trust me on this one.

While the game only lets you explore a small area, it gives you ample opportunity to converse with the deputies and Mr. Clarke. You can also find and collect a few physical clues including the piece of cloth torn from Eleven's gown during her escape from the facility. The simplicity of the game makes it all the more consuming because it is easy to figure out how everything works whether you love video games or are a total noob.

The only real downside is that, just like the show, Stranger Things the game leaves you wanting more. Download the game for free here and prepare to get absorbed into Hawkins' mysteries all over again.

More like this
'Stranger Things' Season 5 Will Echo Season 1 In A Key Way, The Duffer Brothers Confirm
By Kadin Burnett and Sophie McEvoy
‘Stranger Things’ Stan Megan Thee Stallion Grilled Natalia Dyer About Nancy & Steve
By Brad Witter
Does 'Locke & Key’s Ending Mean There Could Be A Season 4?
By Sophia Moore
Everything To Know About 'Evil' Season 4
By Meguire Hennes
Get Even More From Bustle — Sign Up For The Newsletter