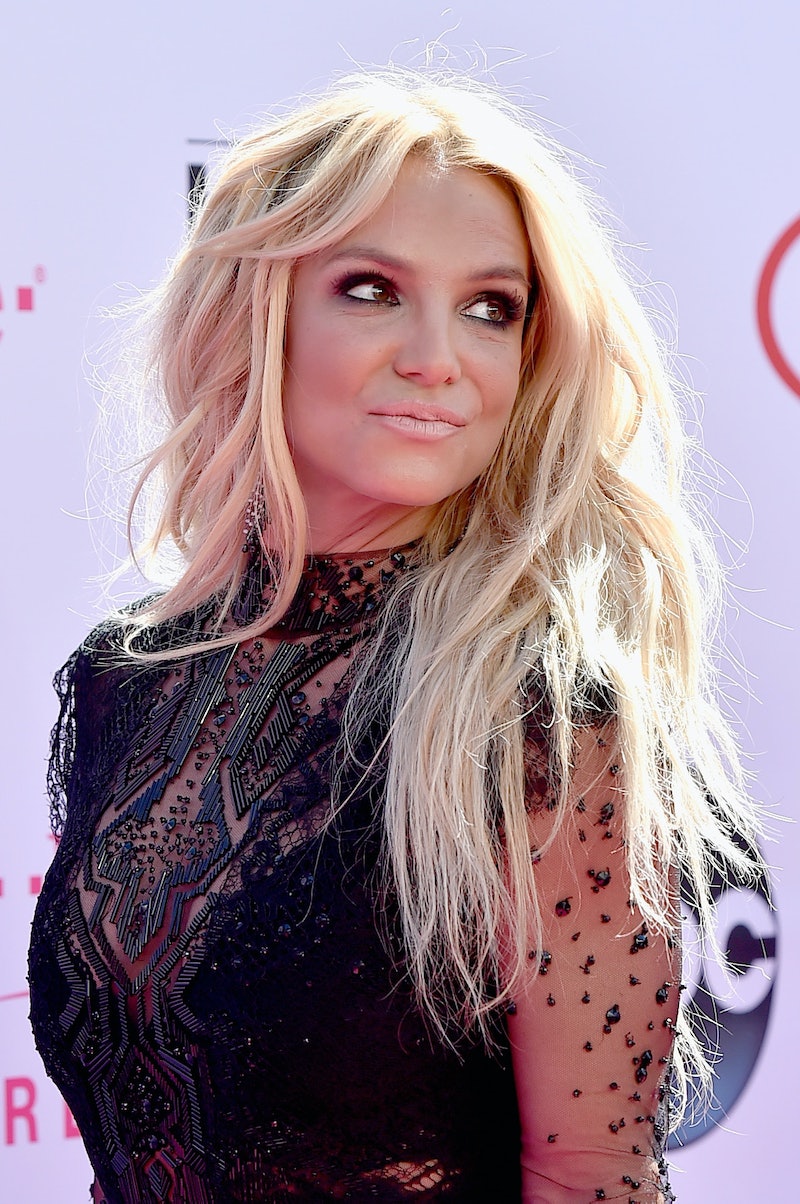 As a '90s baby, I will always be nostalgic about (and slightly biased toward) the greatest decade of all. From Tamagotchis to Pokémon, pop culture was at its peak from 1990-1999. Aside from Spice Girls and Backstreet Boys music, another highlight of that time period was the relationship between Britney Spears and Justin Timberlake. While fans' hearts broke right along with the couple's when they split in 2002, they're still the renowned king and queen of pop music. That's why this news will absolutely make your day: Spears would love to collaborate with Timberlake, according to E! News.

In a recent video interview with Most Requested Live with Romeo, Spears listed her dream collaborators. Although the initial question is what producer or video director she'd like to work with, she instead lists people she'd like to make music with in general. The 34-year-old said,

"I would love to work with — Aerosmith seems really good and bright. He's a genius I think and he's very rock n' roll. He sings from his soul. Gwen Stefani, I think she's great. Justin Timberlake is very good."

"Very good" is such a pleasant way to describe your ex. Plus, she says it so matter of factly, you'd miss it if not paying close attention. While JT hasn't always said the nicest things about Brit Brit (just consult this BuzzFeed article for further reference), Spears has no hard feelings. And honestly, this would be a gift from the music gods. Move over, Kim Kardashian, because Spears and Timberlake would quite literally break the Internet.

You can skip ahead to the 3:53 minute mark in the video below.

Of course, there's no guarantee they will actually record a song together, but that doesn't mean I'm not rooting for it. After all, Spears recently released her new album Glory , so she's got plenty of time before she releases another. That leaves ample opportunity to convince Timberlake to meet her in the studio. Or if things are that awkward between the two of them, they could even record their parts of the songs at different times.

Ever since their debut in the '90s, these two have consistently continued making music. Even though he's no longer with *NSYNC, Timberlake has had an incredibly successful solo career. Meanwhile, Spears' new album is her ninth. That's an impressive feat and I doubt she's done yet. They're both still at the top of their game, so why not join forces?

To be honest, I'm already daydreaming about how magical a music video with these two would be. They dig out their old denim-on-denim outfits for the sake of nostalgia. Can you imagine how perfect that would be? It'd be the ultimate full-circle moment.

That settles it — these two need to get in the studio together ASAP and make fans' biggest dreams come true.