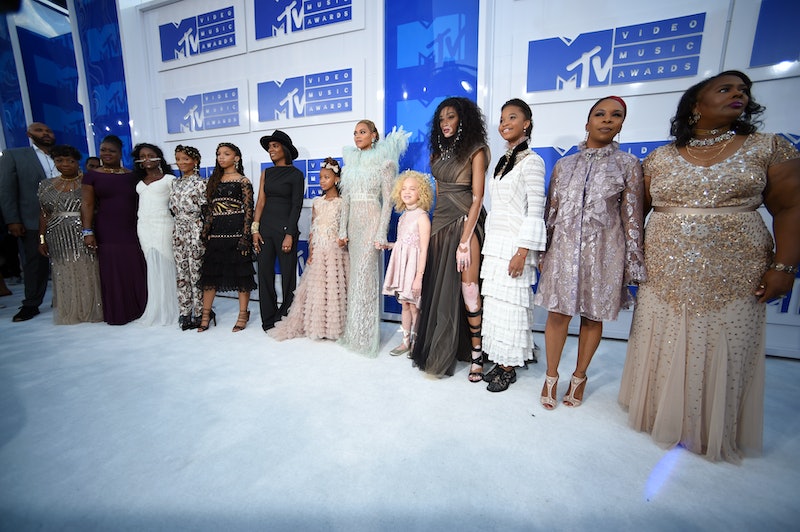 Award ceremonies are about the glitz and the glamour, the celebrities and the jokes, and, of course, the actual awards themselves. However, the MTV VMAs also gave us a somber moment of remembrance, one that was powerful for how understated it was. The mothers of Mike Brown, Trayvon Martin, Eric Garner, and Oscar Grant were all seen on the 2016 VMAs red carpet, posing together in their gowns with their arms wrapped around each other in solidarity and sisterhood. Lezley McSpadden, Sybrina Fulton, Gwen Carr, and Wanda Johnson all arrived as part of Beyoncé's Lemonade entourage — after appearing in the visual film that accompanied the album's release — and they broke off from the squad in order to take a photo alone that really stands out among all that glitz and glamour and celebrity and jokes. A photo that really makes you stop and think.

Because what these women, these very strong women, had to lose in order to be here is something that you cannot replace and cannot describe. McSpadden, Fulton, Carr, and Johnson are in the limelight because they lost their sons at the hands of police or to extrajudicial violence, because they and their sons make up the many, many, many faces of the Black Lives Matter movement. Every time we see them, we remember that not only did they lose their children, but also that they aren't the only mothers who have faced such a loss in the last couple of years — and they might not be the only mothers who will do so in the future.

When I look at this photograph, I want to smile to see them all doing so well, looking so healthy and being at an event so many would love to attend. But I can't smile, because they are where they are because of a sacrifice they never wanted to make. Because they are the face of a movement that reminds them every day of that loss. Because every time we see them, and are surprised to see them, it's a reminder that we managed to forget for even one second what the Black Lives Matter movement is fighting for: the rights of black people to live with the same amount of safety and security as white people do, particularly and especially when interacting with the police and the judicial system.

So, yes, I'm celebrating the fact that Beyoncé's squad continues to include these brave women, who have been sharing their stories and have not stopped sharing their stories in the months and years since they lost their sons. But I'm also frustrated and saddened by how far we have to go to really make a difference, to keep from putting more black mothers in positions like this — in a place of envy and sadness at the same time. All of that feeling is packed into this single powerful photo, and the photo is one that none of us should forget.