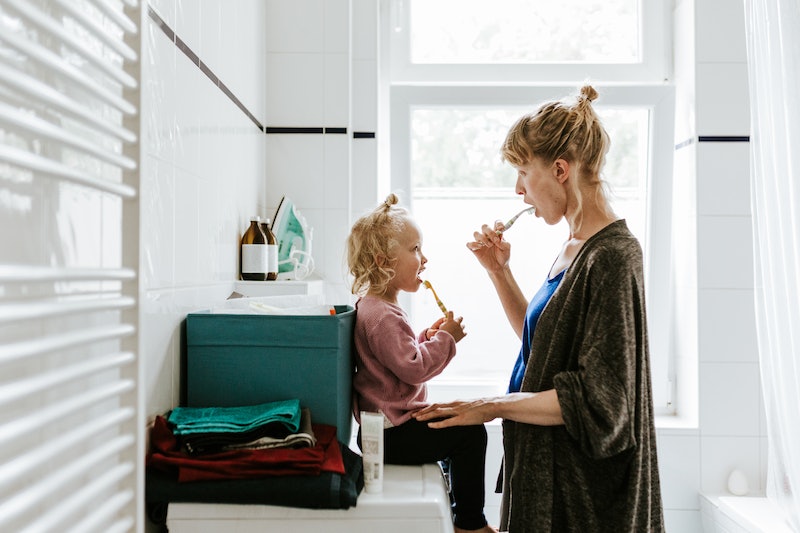 At some point during our formative years, we all heard an old wives' tale or two, right? Some seemed innocuous enough — think "eating bread crust will make your hair turn curly" or "cracking your knuckles will give you arthritis." But there are also gendered old wives' tales we heard as kids that packed more of a punch to our psyches than we probably realized. While we thought little of them at the time, they were insidious in the way that wormed themselves into our thought patterns and perpetuated damaging and often sexist tropes. Don't blame Grandma ... someone passed this sort of tribal knowledge down to her before she passed it on to you.

So what makes old wives' tales a particularly dangerous breed of mental manipulation? Largely because they often stem from seemingly trustworthy sources. Regardless of the fact it's difficult to trace the origins of many old wives' tales (and therefore they could likely be propaganda from the patriarchy), these proverbs and parables generally come from within the family and often from a matriarch. So while there are certain sillier tales we all typically blew off, who can really blame us for taking others at face value — especially when the person passing them to us seems to believe what they are saying?

However, the harsh reality is many of these time-honored tales are pretty darn repugnant. Here are a few prime examples.

1. "Having a Baby Girl Will Steal Your Beauty."

This sends several problematic messages. First of all, it implies there is something inherently wrong with having a daughter — which is obviously ridiculous. I swear this sounds like something a man who wanted a strapping young boy to "carry on his good name" started spreading. The other problematic part of this is the idea that anything can steal your beauty. You see the inference? This old wives' tale would have you believe beauty is entirely physical or superficial. But beauty is many things: mental, physical, emotional, psychological... none of which can be stripped away by the natural and, it must be said, beautiful act of giving birth to a baby.

2. "Shaving Your Legs Causes the Hair to Grow Back Darker."

To be clear, there's nothing wrong with not shaving. In fact, therein lies the problem with this particular tale — it would have you believe that having thicker or darker hair anywhere on your body is cause for major concern. The reality is that cutting does not stimulate new hair growth. Rather, shorter hair is more blunt and and tougher than longer hair, so it can appear thicker or darker (but actually isn't). Again, though, this is all beside the point, which is that people should shave or not shave because it makes them feel good, not because there is some looming threat of having body hair deemed "undesirable" by societal standards.

3. "The Lines On The Palm of Your Hand Represent the Number of Children You'll Have."

First of all, can we all just agree this is bologna? Supposedly, the faint vertical lines just below a woman's pinky on her palm represent the number of children or potential children she will have. For the record, I have two children, yet my palm reveals I could apparently have, like, 12. Sorry, bub! These ovaries are closed-varies. I remember hearing this when I was a child and anxiously trying to trace the lines on my palms to figure out how many offspring I might have, and that makes me kind of sad. Why, as a girl, should I be concerned with making babies? If a girl doesn't have these lines, is she considered barren? And, again, what concern is that of a young girl? These sorts of wives' tales operate under the assumption all girls will grow up to become women who want to have kids, and that simply isn't true.

I can't tell you how many times my grandfather told me this around a campfire when smoke was blowing in my face. And while I was always flattered, I was also gripped with insecurity anytime I was sitting around a campfire or at a school bonfire and the smoke didn't blow in my direction. Ludicrous, I KNOW. Which is precisely the problem — this old wives' tale is just another thing young girls hear that is tantamount to being told our worth is wrapped up in our physical beauty. I don't think I have to tell you how detrimental that notion can be to a little girl going through all the awkwardness of adolescence just hoping to come out with a modicum of self-esteem on the other side.

5. "If You Drop a Biscuit, It is a Sure Sign Your Husband Will Be Poor."

This matters ... why? Aside for being straight-up laughable, there are myriad major issues here rooted in the assumptions being made. Like, for example, that every little girl will grow up to marry a man. Or that every little girl will grow up to get married, period. Or how about the fact that it teaches girls they should care whether or not the man they marry will have a lot of money or a little? Please, old wives' tale, take all the seats — we don't want any of what you are peddling.