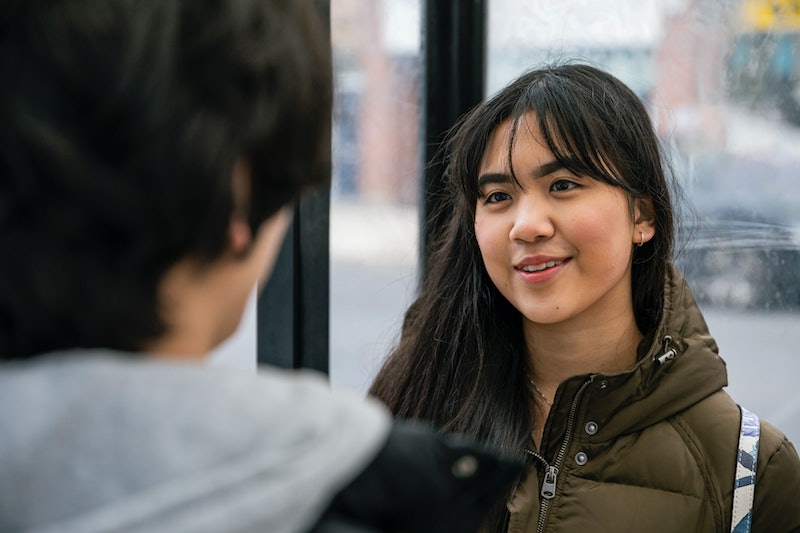 People often say "I meant well" and "it's a compliment" to excuse sexist comments, but unfortunately, meaning well and being sexist are not mutually exclusive. In fact, sexism is often perpetuated in the form of flattery. There are many compliments you may not realize are gendered, but they actually call attention to traits prized based on gender roles — or they might even be gendered insults in disguise.

If you listen to the compliments people around you are receiving, you'll probably notice that men and women aren't getting the same ones. Women are disproportionately complimented on their looks and their clothes, while men are prized for being strong and powerful and "scoring" women.

The problem with complements based on gender norms is that they imply it's better to conform to your gender's prescribed role than to defy it. If a man is supposed to feel better about himself for being muscular, what does that say about less muscular men? If a woman should be glad to date a man with a lot of money, what does that say about women with lower-income partners?

Here are a few compliments it's worth reconsidering giving, as they could inadvertently encourage gender roles and shame people who don't conform to them.

Praising someone for dating their significant other is gendered whenever the complimenter references traits considered desirable based on gender norms. For example, several friends once congratulated me for dating a doctor, which is typically considered a goal of straight women because it's a prestigious, high-earning profession. Men's friends may be more likely to praise them for dating a very good-looking woman regardless of her profession, since our culture tends to value women's looks above all else. These types of compliments encourage harmful, sexist ideas about what traits are desirable in a partner.

The way we compliment one another's bodies is also gendered, since men and women are held to different physical standards that reflect their prescribed roles. Men are supposed to be strong and capable, so the biggest compliment you can give a man is that he's bigger, while women are supposed to be submissive and unimposing, so it's supposedly flattering to tell them they're smaller. Plus, when you compliment somebody by saying their body has changed, you're implying that they were less attractive before and will be less attractive again if they don't maintain their muscle or weight loss.

This compliment isn't always gendered, but it is when it's given to men for doing what's considered minimum work for women. "He picked his kid up from school? Wow, what a great dad!" "He took time off of work when his baby was born? He's so dedicated!" By giving people gold stars for things that should be expected, we excuse a status quo in which people don't do these things.

There are a lot of problems with the word "flattering," including that it usually means "accentuating gendered features." Clothes that "flatter" a woman usually make her look either thinner or more curvaceous. It's less common to discuss clothes that flatter men since there's less attention on their looks in general, but it usually implies that something makes them look stronger, taller, or slimmer. Regardless of gender, clothes that "flatter" someone make them look different from how they are, and it's insulting to consider that a positive.

I don't think I've ever heard this compliment directed toward a man, but I do hear it a lot myself simply for saying things that show I care about what's going on in the world or am willing to have opinions that differ from the majority. The images of an "independent woman" and a "firecracker" have been fetishized, which is ironic given that independent, confident women are usually trying to be seen as human beings rather than sex objects. Men often write on their dating profiles that they're looking for "a woman with confidence," as if that's a rare trait in a woman. A boyfriend even once told me I'd caught his attention because I could have substantive conversations, which is pretty insulting to other women if you think about it. Often, people who compliment women for speaking their minds are sexualizing something that should't be sexualized or revealing negative views of women in general.

Turn on any episode ofThe Bachelorette, and you're bound to hear the men gush about how "gorgeous" and "beautiful" the star is. Then, turn on The Bachelor, and you'll notice the women spending more time talking about how "amazing" the man is. And if you watch the season until the end, you'll probably hear the Bachelor tell a woman how beautiful she is when he proposes to her, and if they survive long enough to get married, people will probably spend the wedding talking about how beautiful the bride looks and what a wonderful man the groom is. When we compliment women, the first place we go is their looks, while looks are just one thing we consider in a man.

More like this
5 Ways To Stand In Solidarity With Women In America From The UK
By Sophie McEvoy
How To Fight For Reproductive Rights, Based On How Much Time You Have
By Courtney Young
Why You're Seeing Green Bandanas At Abortion Rights Protests
By Lexi Inks
Bustle Newsletter: July 5, 2022
By Stephanie Talmadge
Get Even More From Bustle — Sign Up For The Newsletter