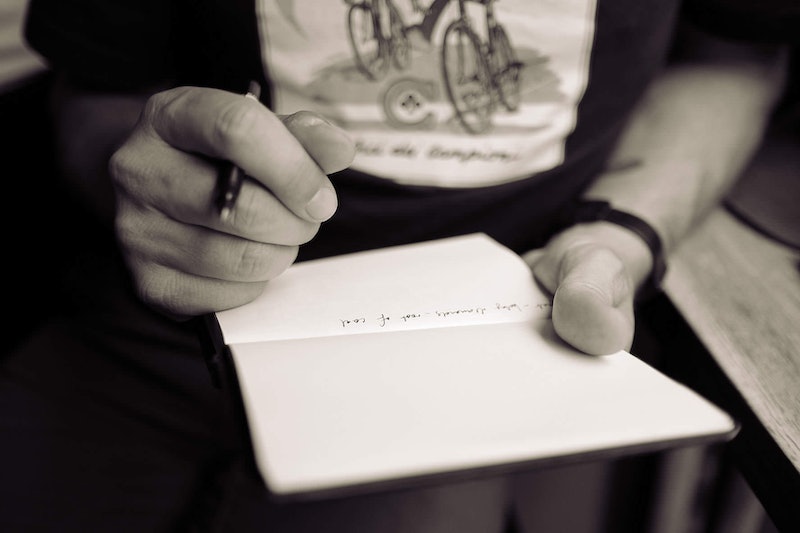 As all writers know, every single book you read — in childhood and beyond — acts as a small paving stone that helps to form the path of your journey from reader, to book lover, to writer. And while the journey wouldn’t have been the same without the inclusion of each of those titles, writers also know there is usually one book that made them want to write — it’s the book that they’ll point to when they’ve finally (finally) landed that first book deal, and think: there, that’s the one book that made me want to be a writer. As a writer myself (albeit still book-deal-less), I know this to be true.

My earliest memory of being laughed at for mispronouncing a word happened when I was around 11 or 12-years-old. I was on the first Beat literature binge of my life, devouring books well beyond my academically-recommended reading level that were filled with themes and metaphors I was unlikely to understand in my entirely unworldly pre-teens — and sometimes still struggle to understand now — and as a result I had developed a serious obsession with Greenwich Village. For an aspiring writer growing up north of Chicago, a city that for all my 11-some years of experience, only summoned words like: gray and beefy, Greenwich Village became a holy land — the place artists went to make art, and girls went to become badass women, and writers went to write, and write, and write some more. And throughout the course of sharing this unrelenting obsession with anyone who would listen, it was brought to my attention that the “w” at the heart of “Greenwich” that I had been so fervently pronouncing (see: “green witch”) was, in fact, silent. This correction was accompanied by a good-natured chuckle or two, and then a sort of round-robin style debate among everyone within earshot as to whether or not the “w” was, in fact, silent.

I’m not sure why this was especially amusing to the person who pointed out my error, nor why the issue of to-pronounce or not-to-pronounce was belabored to such an extent. (And perhaps in the end it wasn’t, and my then-mortification at not only having pronounced “Greenwich Village” incorrectly countless times by that point, but also at suddenly appearing such an impostor for not even knowing how to correctly voice the place I deemed essential to my destiny, have inflated an otherwise benign incident in my memory.) The point is, it did not occur to anyone — and certainly least of all to me — that of course a girl from the gray, beefy Midwest would pronounce Greenwich “green witch”. That girl (aka: me — a voracious reader and a hesitant speaker) had only ever seen it written.

I share this anecdote not as a sad little story about how a shy young girl was shamed into becoming a writer — I had likely mispronounced plenty of words prior to this particular moment, and have continued mispronouncing words I’ve only ever seen written but have never had occasion to speak aloud, well into my adult life — but rather to demonstrate the intensity of my lifelong relationship to the word on the page. When it came to written words I wanted all of them. I wanted every bit of the “g” and the “r” and each “e” and the “n”. I wanted to milk that “wich” of everything it had to offer, even that unexpectedly silent “w”. If something was printed before me, I wanted all of it — I wanted (and still want) to give all the words I have within me back in return.

It was during this first Beat literature binge that I discovered Howl and Other Poems , by Allen Ginsberg. I understood practically none of it, other than the fact that Ginsberg’s use of words like “naked” and “unshaven” made me feel like I was reading something utterly forbidden. But while I didn’t know, really, what any of it meant, I knew that Ginsberg’s poetry affected me in the same way sitting in the back of my mother’s minivan while driving past a car full of teenagers vibrating against the too-loud bass of their souped-up stereo system made me feel — that there was so very much to be had of life, so much physical, visceral mess to get caught up in, and I might be missing it.

While I was waiting to grow up so I could actually begin to understand Howl, I read about Howl instead — about how the book, and its writer, publisher, and sellers were prosecuted for distributing “obscene” literature; about how the collection and those affiliated with it were actually put on trial for all that the poetry collection contained; and about how a small, but mighty gathering of the book’s defenders came to the rescue by making a case for the book’s beauty, awareness, and social significance. I read about the unrest of post-World War II America, and how that unrest led to the rise of an artistic scene so vibrant, so experimental, and so essential that any subsequent creative movement (at least in my own lifetime) would pale in comparison (at least for me.) And the more I read about Howl, the more I came to understand Howl; and the more I came to understand Howl, the more I knew that Howl was exactly what I wanted to do with my life.

I think I’ve probably been a writer forever. My mother, most certainly, has several cardboard boxes stacked in her basement filled with the journals I began keeping practically the moment I learned to write my own name. I spent countless hours of my youth scribbling out character sketches and plot outlines for stories with absurd and melodramatic titles I swiped directly from the texts of other books: “The Vast, Malodorous Sea” and “Spiders Across the Stars” and “A Great Void in the Soul”, filled with equally preposterously-named characters like “Winnow” and “Zither” and “Ovary” and “Avocado”. But Howl — Howl was the book that transformed the act of writing for me, elevating it from mere career to vocation.

I’m a howling kind of writer — I sit at my desk and (if nobody’s home) I howl. I lose myself. I catch a rhythm and I exhaust it. I do things like run into an unavoidable line of poetry in the bathroom and, stepping out of the shower with a head full of soap and only one shaved underarm, drip my way to my desk, shaking the wet off my hands as I begin typing whatever few lines just came to mind that must pour out of me immediately; and then I arrive in yoga class later that day, lift my arms for Virabhadrasana I, and suddenly realize I still have one silky-bare underarm and one covered in small curls. And for all the amazing, transforming, life-affirming books I’ve read, Howl was the first that gave me permission to do that.

Because although I don’t know how Allen Ginsberg wrote Howl — in all my reading about the iconic poetry collection that’s credited with not only transcending the then-limits of what poetry could do, but also with giving a voice to an entire generation of exhausted, malcontent post-war Americans, I’ve never stumbled across that particular, specific origin story — I do sense sometimes, usually after furiously jotting down a few screeching lines of my own, that maybe Ginsberg began his magnum opus with a half-lathered scalp and a trail of water leading from the bathroom to his desk. It's a perfectly valid way to begin.