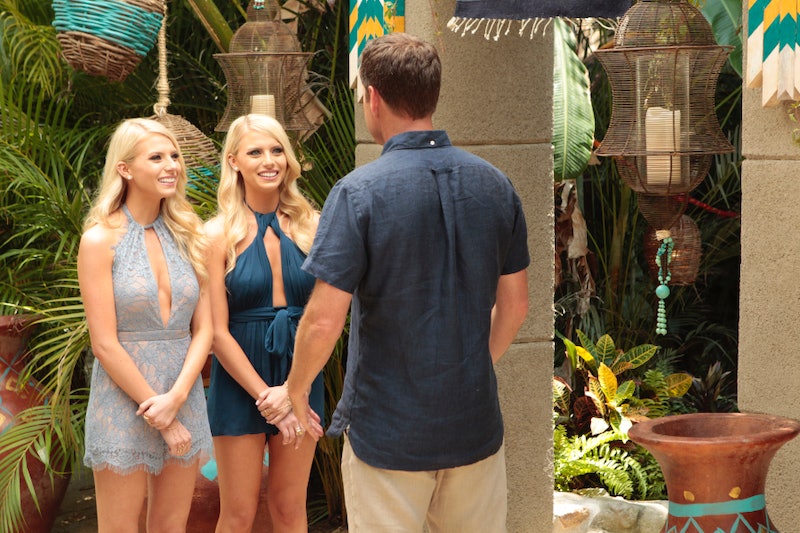 Watching Emily and Haley on The Bachelor was a little awkward, because they were competing for the same guy. That’s not exactly the basis for a strong relationship. That’s why Bachelor In Paradise is so great for them! There is that whole “if one twin goes, the other goes, too,” thing, but there is also a buffet of veritable man meat from which to choose. Emily was originally hanging out with Jared Haibon, but as soon as Caila Quinn popped into Paradise, Jared left Emily high and dry. She was sad, and I was sad for her, because Jared basically wanted to know if it was OK that he was dumping her. No, dude. It’s not OK. Luckily, Emily recovered from Jared’s stupid move. Haley, on the other hand, has had a handful of dates and nothing has stuck around.

The season of Bachelor In Paradise is almost over, so I’m not sure either of them is going home with lasting love. A look at their respective social media accounts doesn’t show any romance, really, but you know what Emily and Haley did go home with? A new best friendship with Nick Viall. I’d take Nick as my long-time best friend than a shot-in-the-dark proposal any day, really.

Here’s what else Emily and Haley have been up to since they left Paradise.

They’re Hanging With The Rest Of Bachelor Nation

Being on The Bachelor or any of its shows is like being in the mafia — once you’re in, it’s really, really hard to get out. Emily and Haley live in Las Vegas, so any time anyone else from Bachelor Nation comes to Vegas, Emily and Haley come out to play, especially if it’s a girls-only weekend and the weather is perfect for the pool.

Like everyone else who has been on The Bachelor/ette recently, Emily and Haley have figured out how to monetize their social media followings by posting content from brands like Graze, Sugarbear Hair Vitamins, and more. I’m not here to judge — I would be making Instagram money if I could, but the twins have like, four million more followers than I do.

The twins are beautiful, and there are two of them — why wouldn’t they go on modeling shoots together? You have to make your Bachelor money while you can, and Emily and Haley certainly know how to do it. Get that paper, girls!

Even though Emily and Haley don't look to be in relationships right now, I think their lives look pretty full. That’s not to say that they won’t get swept off their feet sooner than later. You never know when love is right around the corner.