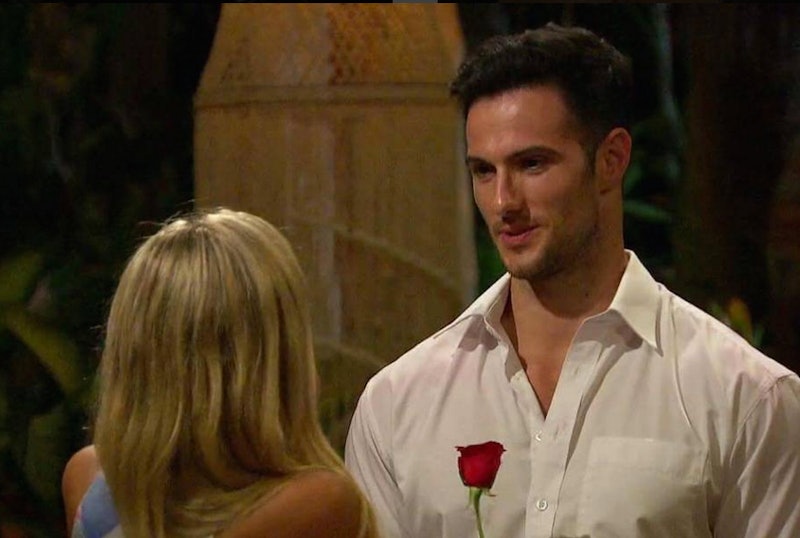 Like many viewers, I watch Bachelor in Paradise mostly for the guilty pleasure factor, and for the fun of recognizing contestants from Bachelor Nation. I hadn't watched any of the Paradise seasons until this current third one, but I'm loving these episodes because, as a fan of Ben Higgins' and JoJo Fletchers' respective seasons, I recognize many of the cast members. One such man is Bachelor in Paradise 's Daniel Maguire, the Canadian stirring up trouble in Paradise with his bizarre rants and often, anti-feminist quotes towards many of the women on the show.

Anyone who instantly becomes BFFs with Bachelorette villain Chad Johnson might be a bit shady IRL, and Daniel is not shying away from that image. He and Chad bonded over protein, but more troubling, over their weird, not OK comments about the female bachelorettes in Paradise. In an interview with People , Daniel defended his behavior (which included many sexist comments about the show's women), saying, "I obviously don't really think that [they look like dogs], but I also don't think they're supermodels or anything...It's just my personal opinion. I was just having fun with it – you can't take it seriously. If you do, then that's your problem."

The problem here is that Daniel's "jokes" are seriously offensive, and that's never OK. His harsh anti-feminist and misogynistic attitude on BiP is not acceptable, and if anyone out there is still unsure how to feel about him, the quotes from him below should make up your mind for you.

1. "I have very high standards. An eagle doesn't settle for a pigeon, right? An eagle settles for an eagle. I don't know what's better than an eagle, like a pterodactyl or something?"

Daniel made some nasty comments as the ladies of Paradise walked in during the premiere....and the animal comparisons began.

2. “You have a better chance of making out with a turtle than a woman.”

Daniel told this to Chad in the premiere after Chad told him in a drunken fit, "You're being such a bitch, dude. Why are you being so un-murder-y?" Um, talking about being violent toward women, insulting everyone and then Daniel still comparing a woman to an animal? Count me out.

3. “I’m a wolf and so far these are poodles, little yorkies and street dogs."

Daniel seems to think he is the hottest catch in Paradise. OK, then.

4. "Hopefully there's some better fresh fruit that comes in that looks not so worn out and not too ripe. Something that looks a little more crisp, a little more succulent and juicy. So far the fruit here looks like it's been bruised in transportation."

Ah, so now the Paradise ladies are not only "street dogs" but bruised fruit. The only women that caught Daniel's eye were Emily and Haley Ferguson, who he described as "juicy," considering they're both 23. Ew.

5. “I think a lot of guys want to sleep with Ashley. I think the fact that she’s a virgin is a positive. Why is sleeping with a virgin good? It’s kind of like winning a battle in Vietnam.”

There is just something so irksome about a dude viewing a woman's virginity as a prize to be plundered.

6. “I’m the king of the jungle, the president of the states, I’m Gandhi...I’m gonna sit on my throne and I’m going to let them come to me. Bring me fine cheeses and wine, artifacts, precious golds...So if you want this rose tonight, come to papa bear."

Daniel apparently sees the women on the show as below him and needing to grovel at him for his acceptance.

7. "When I first saw you, obviously I was attracted. But as time goes on I’m even more attracted to you. When I see your butt, I’m like, ‘Damn,’ you know? It’s amazing. And I want you to know that. That’s how I feel about you, you know?”

Daniel said these charming words to Haley Ferguson on their date, and essentially whittled down her entire being to her having a nice butt and pleasing him with it. By saying this stuff, he just proved that he has absolutely no game and has no clue what women want or like.

Perhaps Daniel is exaggerating his behavior for television, but that doesn't take away from the fact that his words about the show's women cast members are pretty awful.