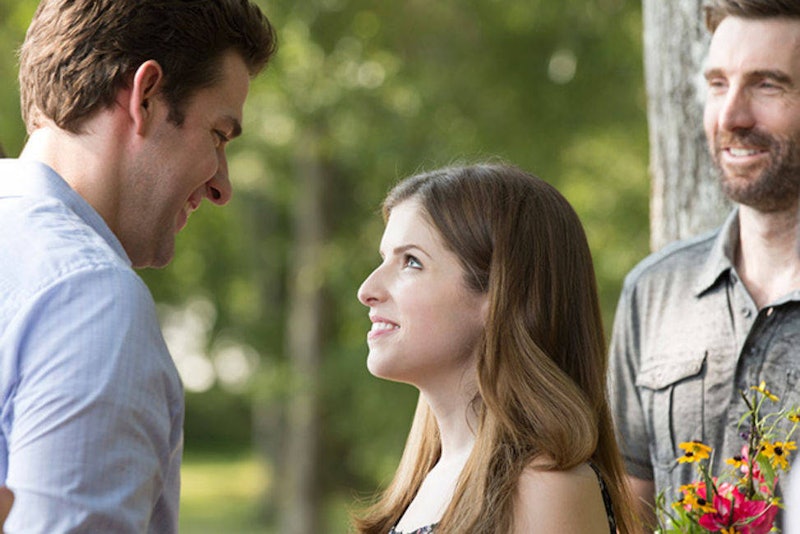 Since her star-making turn in 2009's Up in the Air, Anna Kendrick has been at the top of every hot young actors list, having become a huge force in Hollywood due to a prolific career and ever-growing celebrity. Despite a string of not-so-successful comedies (Mike and Dave Need Wedding Dates, Get a Job), Kendrick has managed to remain one of today's biggest stars, leading one of the most successful original franchises in Hollywood, Pitch Perfect, while also maintaining her status as one of the best celebrities to follow on Twitter. Yet despite her fame having grown exponentially over the years, Kendrick's acting abilities haven't gained the same type of notice. She's known as a celebrity first, an actor second — but her new supporting role in The Hollars should remind audiences that beneath her fame, Kendrick is an actor with seriously impressive talent.

Kendrick's turn in The Hollars, a family drama directed by John Krasinski, is subtle in its greatness, which makes all the difference. The role is small enough that audiences a bit too familiar with the star off-screen can't project their vision of the actor onto the character. In The Hollars, Kendrick plays Rebecca, the very pregnant girlfriend of main character John (Krasinski), who is struggling with the idea of starting a family of his own as he is forced to return to his parents' home after a family illness. It's not a particularly showy role; Kendrick is only featured in a handful of scenes, and Rebecca's function is primarily to be nagging support for John, pushing him towards adulthood whether he likes it or not. In less capable hands, Rebecca would be a cliche, needy, snobby, and pushy (she shows up unannounced at John's parents' house after he hangs up on her). But with Kendrick's portrayal, the character is a highlight of the film. She's unlike anyone else on screen, defying stereotype, and, in a by-the-numbers indie family drama, that's a rare thing.

Kendrick's eye-catching performance in The Hollars isn't surprising if you know of her talent, but sadly, too many people seem to have forgotten that she's capable of such a feat. Few eye-catching movies have come Kendrick's way since Pitch Perfect, despite that movie's massive success. Pitch Perfect hinged on Kendrick's performance as the protagonist, Beca, earned her a number one hit single, and officially brought her into mainstream stardom, but although it led to bigger roles in bigger movies — ones backed by major studios and given wide theatrical releases —they weren't enough to get Kendrick the great, meaty Hollywood role she so deserves. The few big roles she has received have been lacking, to say the least. Mike and Dave Need Wedding Dates crashed and burned at the summer box office, while Into the Woods, although a financial hit, didn't do Kendrick's Cinderella any favors.

As she has moved further into mainstream celebrity, it seems as though Hollywood has done little to welcome Kendrick as an actor. After losing the Oscar for Up in the Air, I assumed she would be inundated with other, Oscar-worthy roles. Instead, she has taken on small, little-seen indies, like a supporting role in Scott Pilgrim vs. the World, and a co-starring part in 50/50, a superb but tiny movie starring Seth Rogen and Joseph Gordon-Levitt. Sure, she played Jessica in The Twilight Saga, but she was hardly the star of that franchise. Kendrick has spent the last several years mostly in the world of barely released, non-studio movies, like Drinking Buddies (2013), Happy Christmas (2014) and The Last Five Years (2014). These movies may have been good, but they were made so far outside of the Hollywood system that they never had a chance at mainstream award-recognition, let alone the box office success that could've led Kendrick to gain more notice as an actor.

Perhaps staying in the indie world has been her preference, but it's not hard to see how Kendrick's career could've been affected by the gender bias in Hollywood. Compare Kendrick's IMDB page to that of Miles Teller, her Get a Job co-star. If you were to equate Teller's huge breakout in Whiplash to Kendrick's Up in the Air moment, it's notable that following his success, Teller has picked up several Oscar-y roles, while Kendrick has not. This year, Teller starred in the inspired-by-true-events War Dogs, and is gearing up for the November release of Bleed for This, a boxing movie sure to make a play for Oscar votes. In contrast, Kendrick will star in Trolls, an animated movie about Troll dolls, and a drama, The Accountant (in which she has a supporting role). Both stars should've, theoretically, had similar career trajectories following their breakouts, but it seems that despite both of them having become big celebrities, only Teller has been given the kind of prestigious roles his talent warrants.

Kendrick is aware of the bias. "There's [a film I'm considering] now where I have to wait for all the male roles to be cast before I can even become a part of the conversation," she told Glamour in 2015. "Part of me gets that. [But] part of me is like, 'What the f--k? You have to cast for females based on who's cast as males?'" Apparently so. The Center for the Study of Women in Television and Film at San Diego State University conducted a study in 2015 showing that among the highest-grossing films of 2014, only 12 percent featured female protagonists. In supporting roles, women don't fare much better, with only 29 percent of major characters in films surveyed being women, and only 30 percent of speaking characters overall being women, too. It follows, then, that just as there are less roles for women in Hollywood overall, there are less meaty, high profile roles available for talented young actors like Kendrick. Hell, even the movie she was Oscar-nominated for, Up in the Air, featured a male lead.

Kendrick may be a star in this post- Pitch Perfect world, but perhaps in part due to the lack of great roles available for women in Hollywood, it's easy to forget that she's isn't just a charming celeb, but a damn good actor, too. And that's what makes seeing her in The Hollars such a nice refresher. Despite being an indie movie, The Hollars has gotten a lot of press thanks to its big name stars. In other words, your run-of-the-mill audience might actually see it. When they do, hopefully they'll be reminded that Kendrick is more than the girl from Pitch Perfect, and capable of major, Oscar-worthy roles.