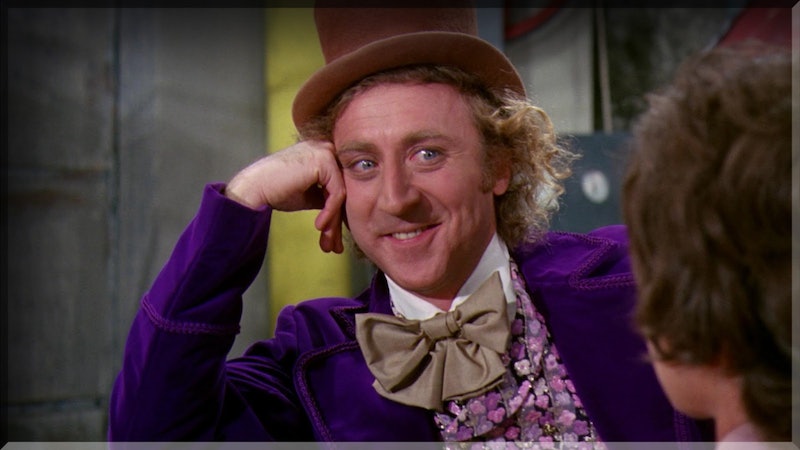 Heartbreaking news broke in Hollywood on Monday: Gene Wilder died at age 83, according to the Associated Press. While his career has spanned across several decades, Wilder's role in Willy Wonka and the Chocolate Factory may be his most memorable. Most likely, that's because it brought a childhood book to life. But I'd bet that some of its notoriety also comes from the fact that the character was transformed into a popular meme. Those who frequent the Internet are likely familiar with the "Condescending Wonka" meme. It's applicable in ample situations, but I'm focusing on the times it's been used to fight sexism.

According to KnowYourMeme.com, here's a description of Condescending Wonka: "As its name suggests, the captions can be characterized as patronizing and sarcastic." What better attitude to use when trying to smash the patriarchy? It goes without saying that Wilder was much more than a meme and I'm not trying to reduce his career down to just that. Instead, it's more of a tribute to the 1971 version of Willy Wonka that kids and adults have loved for years. If anything, this meme has helped the character remain a staple in pop culture.

Here's a round-up of all the times Condescending Wonka shut down sexism — or in some examples, memes that can double as a perfect response to sexist comments. Because come on, there's no place for misogyny in the Chocolate Factory.

Nope, nope, nope. Whistling is not a way to win over a woman's affection.

Mr. Wonka is right. Sexist jokes are not the key to a girl's heart (or anyone's for that matter).

OK, so this example isn't specifically targeting sexism, but it's a perfect response next time someone starts a statement with, "No offense, but... [insert offensive comment here]."

This Wonka meme gets seriously political. In doing so, it raises an important point: Aren't women's rights to control their own bodies just as important as any other civil liberty?

Just like the whistling meme earlier, catcalling is never cool. Condescending Wonka is not here for it.

Ugh, "your mom" jokes are so 7th grade. Mothers are strong women, not the butts of jokes.

If someone ever tries to use that creepy line, feel free to whip out this Wonka meme.

This meme is great for the next time someone tries to tell you that you can't do something, simply because of your gender.

See? Condescending Wonka is not here for any sexist comments. And it's a fun way to keep the character's legacy alive.