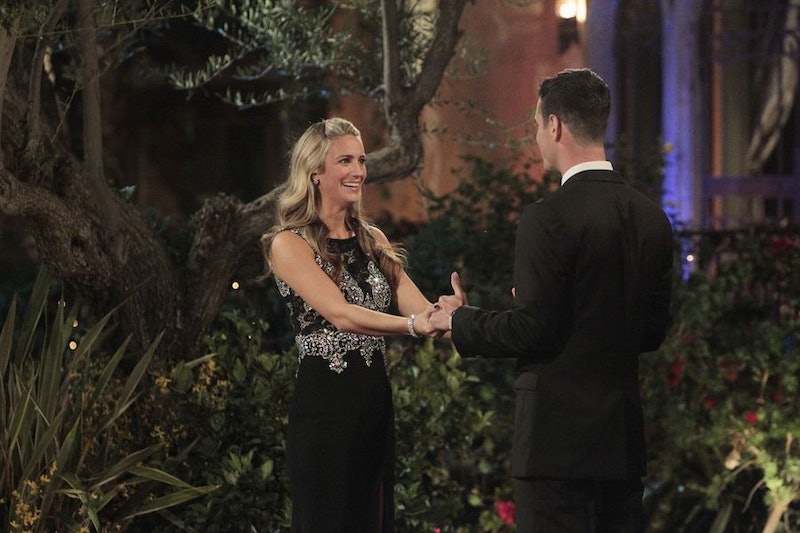 As fans know, Bachelor in Paradise seems to have its own cast of animal characters: The crabs, the dogs, Ashley's I. subtitled parrot, and Clare's wine-loving raccoon. So, this week, the show welcomes a new addition who adores a certain bird so much that it's in her job title. If you're wondering, "Who is Tiara Soleim?" when she enters Bachelor in Paradise, I have the best news for you — she's the "Chicken Enthusiast" from Ben Higgins' season of The Bachelor ! You most likely remember her for having a very memorable (and GIF-able) intro video, which featured her hanging out with her actual chickens.

Unfortunately, the Redmond, Washington, native flew the coop soon after that and got eliminated in the first week. But Tiara's not chickening out when it comes to love — she arrives in Mexico this week to shake her tailfeather and find the second love of her life (chickens are probably the first). Will she find love in the Bachelor in Paradise pecking order? Could Tiara ruffle some feathers among the current contestants? And the most important question of all: Will she bring one of her chickens? Because I think it's pretty clear that Paradise is a very animal-friendly place.

"If I see chickens anywhere, I want to stop and hold them," Tiara said in her official Bachelor bio. Aww. Chicken jokes aside, here's what else you should know about Tiara.

She Enjoys The Company Of Other Animals, Too

Sure, her chickens are her No. 1 fowls, but Tiara has affection for other animals as well. In her official Bachelor bio, Tiara said that her favorite trip was to Ireland, because "I rode horses for 10 days!" and she couldn't live without her chickens and her horse.

She Appeared In A Fashion Show

Recently, Tiara was a guest at the Lady 12 Apparel fashion show at the Metropolist in Seattle, benefiting the The 12 Foundation. Good looks for a good cause.

She'll Be In A Documentary

According to a post on IG, Tiara will appear in Breanne Rice's Discovery Channel documentary, which filmed some scenes at barre3 Seattle Eastside studio.

She Has A Sense Of Humor

Tiara knows her love for chickens is quirky, and she's not shy about posting all the chicken photos.

She Has A Real Job

While the job title "Chicken Enthusiast" sounds beyond awesome, it doesn't sound like a paying one (yet). According to her LinkedIn profile, Tiara (full name: Tiaralyn) is a dental assistant in Redmond. You know, when she's not looking for love on TV or taking care of the coop.

Now, let's see what Tiara brings to Bachelor in Paradise, because it may be more than just chickens — but please bring some chickens, too.