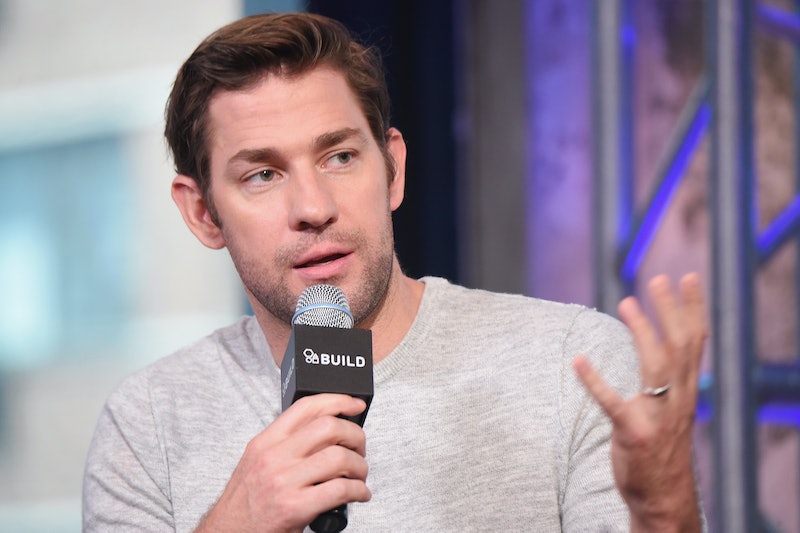 John Krasinski was completely loveable as Jim Halpert in The Office, and, since the series ended, his career has only gotten better. With the announcement that Krasinski will play the lead in Amazon's new Jack Ryan series, along with the release of movie The Hollars in which he both acts and directs, life seems pretty sweet right now. Which is why his latest interview with E! News is way too cute. As part of a new series called "Going to the Movies With," actors reveal their movie watching habits, and Jim Halpert's edition does not disappoint. John Krasinski's favorite movies reveal a lot about the actor, and we even find out how he takes his popcorn (super important information, I think you'll agree).

I should probably get the important stuff out the way first — Krasinski takes his popcorn with "No butter" and his favorite flavor of M&M's is Peanut. So, if you find yourself in a movie theater with John Krasinski, you know what to buy him. While he's very selective about his snacks, the actor is much more open-minded when it comes to movies, and he lists a wide range of favorite films throughout the interview, showing that he has a lot of different interests and inspirations.

When asked what his favorite animated film is, Krasinski says, " Toy Story though, from a storytelling perspective, it was the most unbelievably impressive thing." Not only does this prove that he's the greatest man alive, since he understands Pixar fans completely, it also shows that he never stops thinking about the story. While some might write off an animated film as a kid's cartoon, The Office actor appreciates the finer details, the script, and the narrative. He also takes the opportunity to tell us that his "two-and-a-half year-old is obsessed with Finding Nemo." Clearly, the movies his daughters like are having an impact on his life too.

Next up, Krasinski is asked which movie made him laugh out loud, and he names The Lobster . In particular, it's the lead performance by Colin Farrell that Krasinski notes, of whom he's quite a big fan. As the actor says, "Farrell always makes me laugh. I think Colin is so funny. It's a very weird movie." In the movie, single people have a time limit in which to find a romantic partner. If they don't manage it, they get turned into an animal. Clearly, Krasinski is a fan of quirky and unexpected humor, as well as actors taking on roles outside of their comfort zone. Perhaps his rave review of Farrell's performance could lead to him starring in Krasinski's next film?

The actor also notes the Good Will Hunting soundtrack and The Godfather's Marlon Brando as favorites, rounding out an already eclectic mix of films. His love of classic cinema, alongside his appreciation of cleverly compiled movie soundtracks, shows that Krasinski is a film director at heart, always thinking about the bigger picture.

And when asked when he last cried at a movie, the Jack Ryan star says it was watching The Hollars, "Last night... I cry every time." With his sense of humor, and his readiness to admit his emotions, John Krasinski is basically the perfect man, am I right?