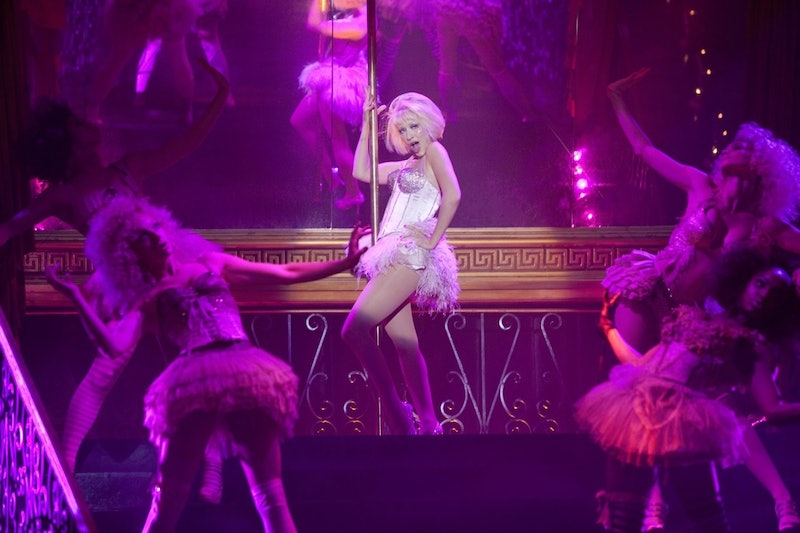 Movie musicals haven't always been sexy. The genre was a popular staple of Hollywood until recently, which means it was all the rage back when censors and societal conventions prevented any real hint of sex to be depicted onscreen. In the modern era, movie musicals are slowly becoming more popular, but a majority of movie musicals are either kids' movies, or animated, or both. And as much as we like to joke of having our sexual awakening during the "Can You Feel The Love Tonight" scene in The Lion King, calling that movie sexy would be a stretch. The 17 sexiest movie musicals of all time, however, are all sexy — most with little to no animation.

It's not hard to make a sexy movie musical. (Unless you're one of those people who thinks musicals are inherently ridiculous because people don't break into song in real life. Then, it's really hard to make a musical sexy.) All a musical needs to be sexy is a sexy song, or dance, look, or all three together. Looking back at musicals of the past, there are plenty of sexy musicals, but they are definitely all on a sliding scale. Just like not every movie is Fifty Shades of Grey, not every musical can be Moulin Rouge.

Marilyn Monroe and Jane Russell are just two women on a cruse looking for men and diamonds. Oh, and they're sexy as hell.

Romeo and Juliet plot aside, there's something incredibly sexy about watching gang members break out into beautiful ballet.

Grease taught a lot of teenagers about sex, or at least John Travolta's pelvis thrusts did.

On the surface, Funny Face isn't all that sexy — whoever thought Audrey Hepburn and Fred Astaire had simmering chemistry was dead wrong — but there's a reason Hepburn's all-black outfit is considered an iconic moment in fashion. (Hint: it's because it's sexy.)

Many things can be said of The Rocky Horror Picture Show, but one thing that cannot be said about it is that it is not sexy.

Cabaret: proof that even a sexy musical about a sexy singer can be depressing AF.

Evita stars Madonna and Antonio Banderas, so, even if it were about two people who remain fully clothed and celibate for all of eternity, it would still be pretty high on the sexy charts. Just sayin'.

Rent is a tearjerker, but it's also a fun movie about living your best life with those you love, and that includes being sexy in whatever way you want to be.

Oh, Burlesque, you might not be a good movie, but you are quite sexy.

15. The Umbrellas of Cherbourg

This French musical is all bright colors and hopeless love. If you think the smell of gas is sexy, then you'll definitely enjoy this one. (How's that for a tease, eh?)

Stream The Umbrellas of Cherbourg here.

The Last Five Years will have you crying like a baby, but this painfully honest musical is aisn't all tears, there's also some pretty sexy musical love scenes you won't want to miss.

After watching these 17 sexy musicals, the real question seems to be, which musical is the sexiest one of all?