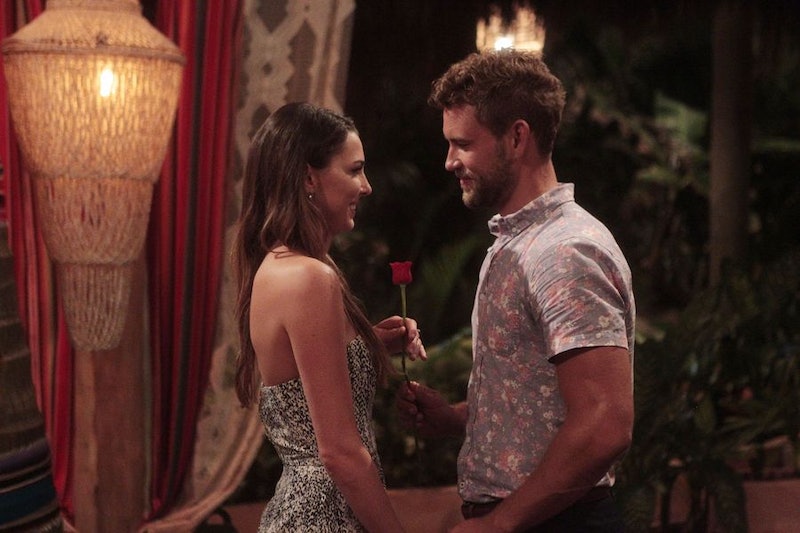 Well, the jig is up, folks — Nick Viall is the new Bachelor (I can’t even contain my excitement, but that’s a story for another time). But that lends itself to a bit of a spoiler alert for Bachelor In Paradise: Nick and Jen Saviano were hanging out in Mexico, and the last promotion for the show showed Nick looking at engagement rings. Something obviously went awry — what happened between Nick and Jen on Bachelor In Paradise ?

Nick told After Paradise hosts Sean Lowe and Michelle Collins that Jen is a wonderful woman and great person, but things just didn’t work out. I mean, sure, that happens, especially when you date someone in Paradise for three weeks and then have to get back out to the real world. From Nick’s point of view, there didn’t seem to be any ill will between him and Jen. On After Paradise, he made it seem like their relationship just didn’t work out because of any number reasons a relationship doesn’t work out. Seemed basic enough. But how does Jen feel about this? In the promo for the final episodes of Bachelor In Paradise, Nick is crying but Jen is not — did she refuse his proposal, if he did propose? A tweet she put out as the Bachelor announcement was being made seemed a little strange to me:

If Jen needs to chug wine to take the news of Nick being Bachelor, could it mean that she’s not over him? Or that he broke up with her to be the Bachelor? I thought that making Nick the Bachelor would free me of so many questions I had about the show, but really, it’s just introduced more of them. In any case, I wish Jen the best off-camera and Nick the best on his new journey to date 25 women at once. He’s going to need the luck in finding the love of his life. Third time’s a charm...