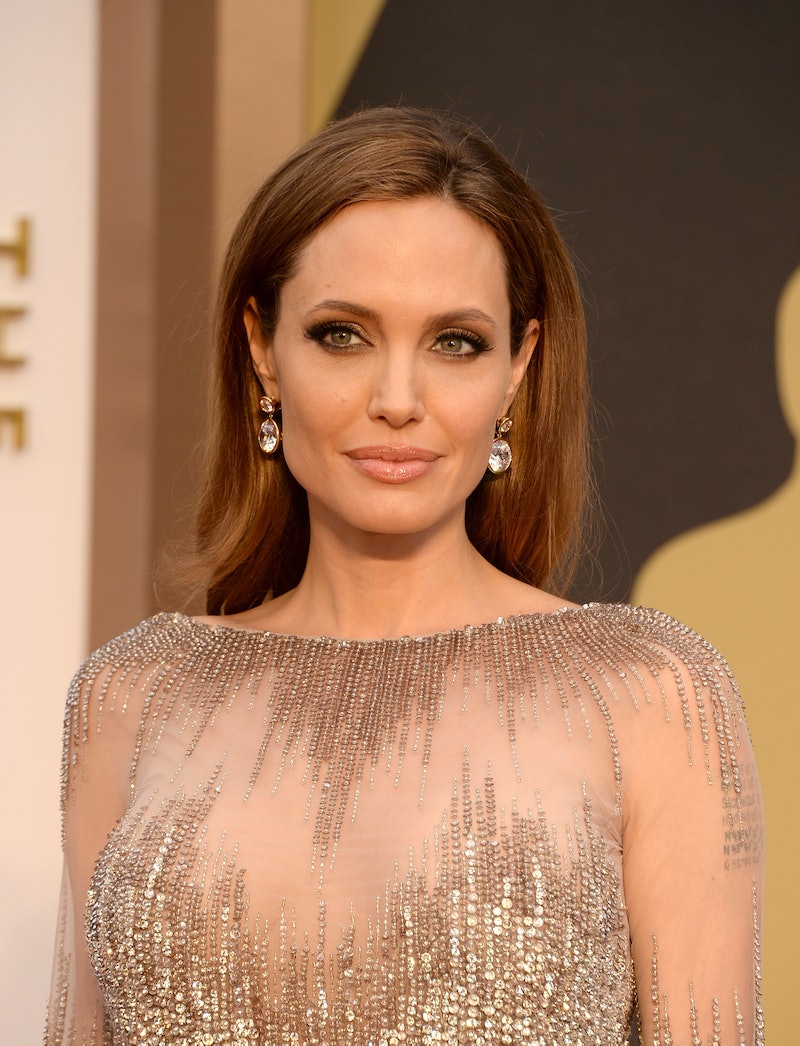 By this point, only people who still have "Brad + Jen forever!!" written on their lockers still have anything to contribute to the "Angelina Jolie is a monster" dialogue. Over the past decade, the once-scandalous actress has won over millions of fans, thanks to her powerful film roles, impressive humanitarian work, and sweet, solid relationship with Brad Pitt. Yet likely because of the intense scrutiny she gets every time she opens her mouth, Jolie has always seemed reserved, aloof, and, at times, even cold. During the last few weeks, though, the image of Jolie as an "Ice Queen" type has been challenged, due to incidents like the creepy-cool Maleficent trailer and the Oscar super-selfie. And now, that old image is about to be shattered completely by the release of Entertainment Weekly's extended Q&A with Jolie for Maleficent , in which the actress comes across as candid, down-to-earth, and — dare we say it — even funny.

Discussing topics ranging from the application of her costume's horns to her much-publicized double mastectomy, Jolie manages to shred her icy public persona while still maintaining privacy about the most intimate parts of her life. There are no reveals of what really happened on the set of Mr. and Mrs. Smith or photos of the family's last trip to the beach, sure, but there are still plenty of startling revelations about the actress. The five biggest:

1. She Could've Directed 50 Shades of Grey

Back in June 2012, a rumor floated that Jolie was one of the directors under consideration to direct the film adaptation of 50 Shades of Grey. No one took it too seriously, of course, because the idea of the Oscar-winner taking on the movie version of E.L. James' bestseller was absolutely outlandish. Or was it? In the EW piece, interviewer Anthony Breznican asks Jolie how close she came to actually directing the film — and the actress turns bright red.

"I — I was just —" Jolie says, shaking her head and blushing.

Pressed by Breznican to continue, Jolie pauses before explaining that after making In the Land of Blood and Honey, she felt that if she "ever directed again, it would have to be a certain kind of film." She then continues on to say, with many more "ums" and "I just"'s than one would expect from the normally eloquent actress, that she's looking forward to seeing Sam Taylor-Wood's version of 50 Shades.

"I’m better at telling some stories than others but um, who knows?" Jolie says. Does this mean 50 Shades: the Sequel could have Jolie's name on the marquee? We can't imagine, but then again, we never thought she'd actually have considered making the first one, either.

On first meeting Elle Fanning, who plays Aurora in Maleficent: "it was like being attacked by a thousand cute gorgeous bunnies."

Yes, those words came out of Angelina Jolie's mouth, and yes, we're just as stunned as you are. Jolie also talked about how Fanning is "magic" and "full of love," but we're more focused on the bunny comparison.

3. She Came Up With Maleficent Voice's During a Bath

Well, her kids' bath, at least. After testing out several voices for Maleficent and not finding one that worked, Jolie ended up coming up with the final version while giving her children a bath.

"I started to mess around with this playful [sing-songy] voice," she says, adding that it still "gets very, very dark." Later, she describes how she practiced the voice by going outside and screaming at the bushes.

"Mom was a bit nutso for a period," she says.

4. She's Feeling Great — But Still Has One More Surgery Left

After a top-secret preventative double mastectomy that became highly publicized once Jolie published an op-ed in The New York Times last May, the actress says she feels 100% back to normal. Still, the medical dramas aren't over, as Jolie is still at risk for ovarian cancer, the disease that took her mother's life in 2007.

"There’s still another surgery to have, which I haven’t yet," Jolie says.

In the meantime, Jolie reveals that she relies on wisdom and support from women she meets who have gone through similar struggles.

"I’ll get advice from all these wonderful people who I’ve been talking to, to get through that next stage," she says.

The most un-Jolie moment of the whole interview? When Brenzican, after complimenting the actress on her decision to publicly discuss her health struggles, extends his fist over the table, and JOLIE RECIPROCATES. The actual text:

On that note, we're just going to go re-watch Wanted and remember the Jolie of the times past. Because this version of the actress is nothing like the one we thought we knew so well — and that's exactly why we love it.