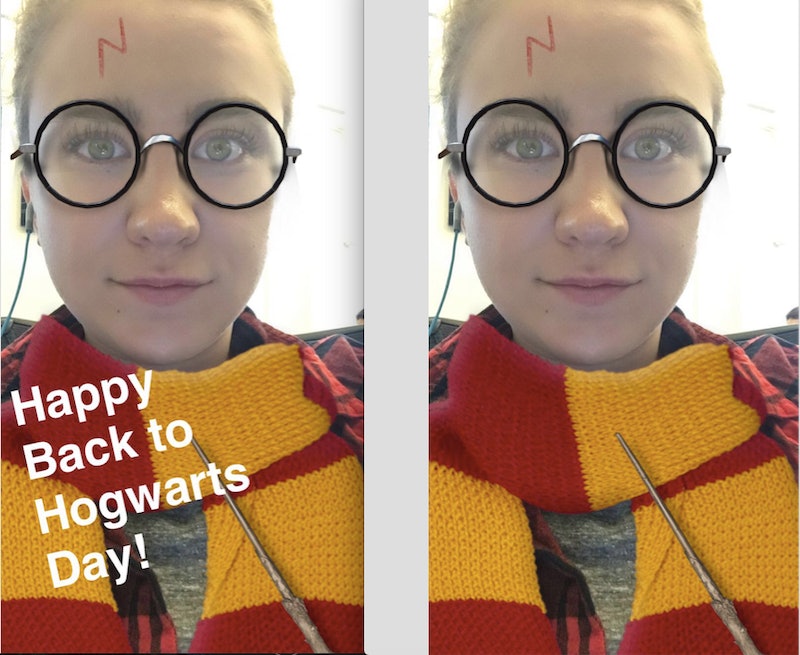 Hey, Potter punks — it's that time again! Every September 1, J.K. Rowling tweets about Back To Hogwarts Day to remind us that this is, in fact, the day that young witches and wizards are piling aboard the Hogwarts Express at King's Cross and heading off to school. This September 1 was no exception, because bright and early Potterheads were graced by not just J.K. Rowling's tweets, but a Harry Potter Snapchat filter, and an actual departure listing to Hogwarts from the train station. WHAT A TIME TO BE ALIVE (AND AN OVERGROWN UNREPENTANT NERD)!!

Funny story, though: Rowling made a little snafu in her tweet this year. Early this morning she wrote, "If you're at King's Cross, the Potter, Granger-Weasley and Malfoy families are there too. Albus Severus starts school today. #19YearsLater." This, of course, alludes to the opening scene of the play Harry Potter and the Cursed Child, which is also the last scene of Harry Potter and the Deathly Hallows. Alas — according to Rowling's own canon, that doesn't happen until next year! Fans pointed it out and she quickly tweeted a response. But really, can we talk about how #goals it is to have a fandom so rabid that they know some of your own canon better than you do? We are all insane and I love us (but not as much as I love J.K., sorry not sorry).

Also, in Rowling's defense, SOME OF US BECAME WRITERS FOR A REASON. Math is #hard, y'all. And when you think of all the genius that has spilled out of her beautiful brain in the last two decades, there's hardly any room for something as trivial as the date. (Also not entirely convinced she isn't a time traveler, so maybe for her it is 2017? Conspiracy theories ahoy!)

But back to some of the adorable byproducts of this #blessed day. First, this adorable train listing that made me drink my own river of tears this morning.

And then, of course, the glorious return of the HARRY POTTER SNAPCHAT FILTER.

It's got all the works: it turns your eyes Lily Potter green, gives you the iconic glasses and scar, and even throws in a Gryffindor scarf and wand. If you're having trouble seeing it, make sure you've downloaded the latest version of the app by updating it in the App Store! Then you can let your dork flag fly as high as the rest of ours.

BONUS: when you raise your eyebrows, you get that Hogwarts letter you've been casually waiting 14 years for.

BE STILL MY HUFFLEPUFF HEART. Happy Back To Hogwarts Day, everyone — may it be as magical as you are!