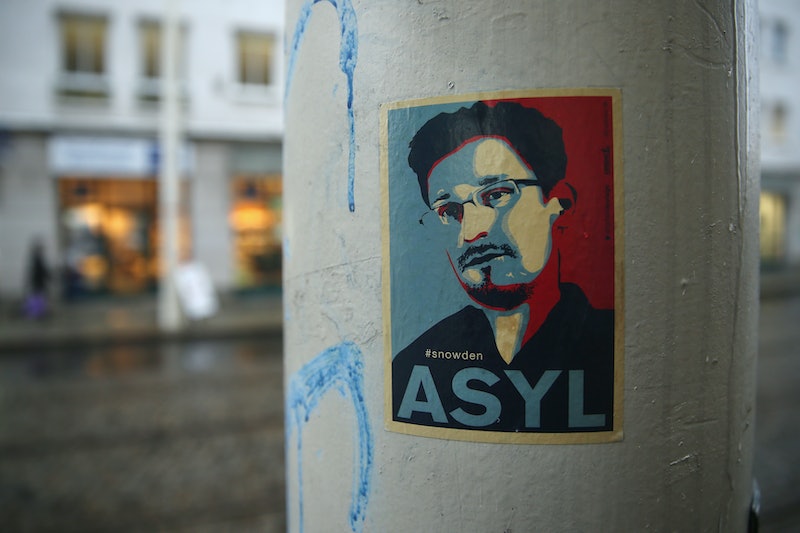 The name Edward Snowden means different things to different people. To some, he's a hero, a brave whistleblower who sacrificed his own wellbeing in order to benefit the American public at large. To others, he's a traitor, a criminal who put American lives in danger by leaking U.S. government secrets to the press. This debate will likely begin anew when the film Snowden hits theaters, but with the film's main focus being on Snowden's infamous 2013 NSA leak, it's not going to answer every question about the man. Like, for instance, where Snowden is now, in 2016.

After stealing, but before leaking, the government documents that would find him on the wrong side of the law, Snowden fled to Hong Kong. After he was officially charged with stealing government property and violating the Espionage Act, he hightailed it again, this time to Russia. The country offered him asylum for one year, meaning that Snowden was free to stay in Russia until 2014 without fear of being extradited to the U.S. where he would be arrested. After his year was up, the Russian government gave him a three-year extension, meaning that Snowden is free to live in Russia until Aug. 1, 2017. As far as anyone knows, he is still in the country, living in an unknown residence. But that doesn't mean he's hiding.

Snowden has remained very much in the public eye, as an advocate for government transparency and freedom of the press. He joined Twitter in 2014 and is a frequent user, boasting over two million followers but following only one account himself (The NSA). He also acts as the director of the Freedom of the Press Foundation, a non-profit organization dedicating to fostering a media that is free to criticize its government. Snowden also makes his living via speaking fees, where he routinely appears before crowds via an internet livestream from an undisclosed location.

One notable and recent appearance occurred at this year's Comic Con. During a secret screening of Snowden, with director Oliver Stone and stars Joseph Gordon-Levitt and Shailene Woodley all present, the whistleblower made a surprise showing via livestream and was able to interact with those in attendance; even opening up a bit about his unorthodox living situation. "I can confirm that I am not living in a box,” Snowden said, according to The Guardian's Sam Thielman. “I actually live a surprisingly free life. This was not the most likely outcome. I didn’t actually expect to make it out of Hawaii. I thought it was incredibly risky."

As far as anyone knows, Snowden is still living in Russia, though no one's sure exactly where. He's allowed to stay there for another year under asylum, at which point he may need to find a new country to call home — or else face certain capture by returning to the United States.

More like this
Taylor Swift's “Carolina” Theme For 'Where The Crawdads Sing' Soundtrack Is Here
By Jake Viswanath
Olivia Rodrigo’s Song Dedication To 5 SCOTUS Justices Sent A Strong Message
By Grace Wehniainen
'Elvis,' 'Walk The Line' & 10 Other Movies Where The Actors Actually Sing
By Radhika Menon
Anne Hathaway’s ‘The Devil Wears Prada’ Anniversary Post Turned Political
By Brad Witter
Get Even More From Bustle — Sign Up For The Newsletter