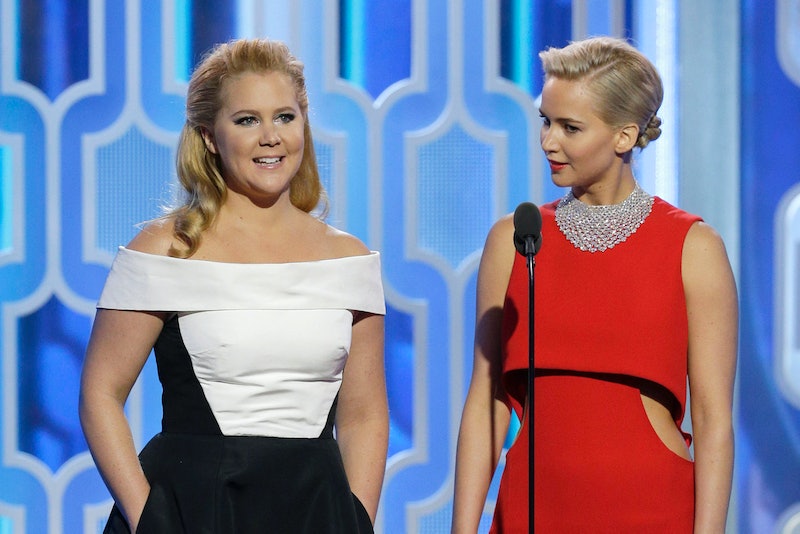 It's the tough times that define who your true friends and family members are. And that's exactly what happened when Jennifer Lawrence helped Amy Schumer after the Trainwreck shooting. In July 2015, a gunman opened fire in a Lafayette, Louisiana movie theater during a showing of Schumer's movie Trainwreck killing two women, Mayci Breaux and Jillian Johnson, and injuring nine others before killing himself. The tragedy is something that effected the Inside Amy Schumer star greatly to the point that she couldn't help feel a bit responsible. Luckily, she had her family and close friends nearby to help her cope, including J. Law who comforted her in a way that only a good friend, who's really comfortable with you, could.

While chatting with Lena Dunham for her newsletter, Lenny Letter, Schumer reflected on the moment that brought her and Lawrence even closer. She said,

"[When the theater shooting happened,] it was such a shock, and it shouldn't have been because it happens, but … You know, that is actually when I felt the closest to Jennifer Lawrence, because that day she texted me, 'It's your fault.' And in times like that only jokes make you feel a little better."

The fact that the shooting happened during her movie was something Schumer had a hard time dealing with. So to have The Hunger Games actor reach out in a way that could make Schumer smile during such a difficult time showed the 35-year-old comedian that J. Law is someone she wants in her life, especially during the darker times. "But knowing it was my movie, and … that they went and they bought tickets and wanted to go see this movie, it just crushed me," she explained to Dunham. "I felt so powerless. And it felt a little bit like something that I had done, that there was a connection to me actually hurting people."

A true friend can pull you out of the dumps, like Lawrence did. Even if a friend has to use dark humor to make their friend feel better, at least they're showing compassion. Plus, this is Schumer and Lawrence we're talking about, so J. Law's joke is absolutely fitting for their friendship and personalities, which is why The Girl with the Lower Back Tattoo author appreciated Lawrence so much in this moment.

It even got her thinking about how she can lend a helping hand in preventing gun violence. After the shooting, she reached out to her cousin New York State Senator Chuck Schumer, which led to the two saying "enough is enough" when it comes to gun violence and to Schumer educating herself on gun control and what she can do personally to aid in the issue. She even visited the White House when President Obama signed his executive order on gun control.

"I got to go to the White House with my brother and my sister when Obama signed his executive order on gun control, and all these people were there, all these victims of shootings," Schumer said.

"All these people who joined this movement to try and help stop gun violence, and they come over and they are like, 'Thank you, because nobody listens to politicians, they listen to celebrities, so thank you, please keep helping us.' Hearing that, and seeing Obama deliver that speech — like, tears just shot right out of his face when he started crying about the first graders being shot — I was just like, I am a lifer, I am in this. I really hope I don't have to die for it, but I would."

Like Schumer, Lawrence has also pushed for gun control, which just goes to show you that when best friends stick together during life's ups and downs, powerful things can happen.