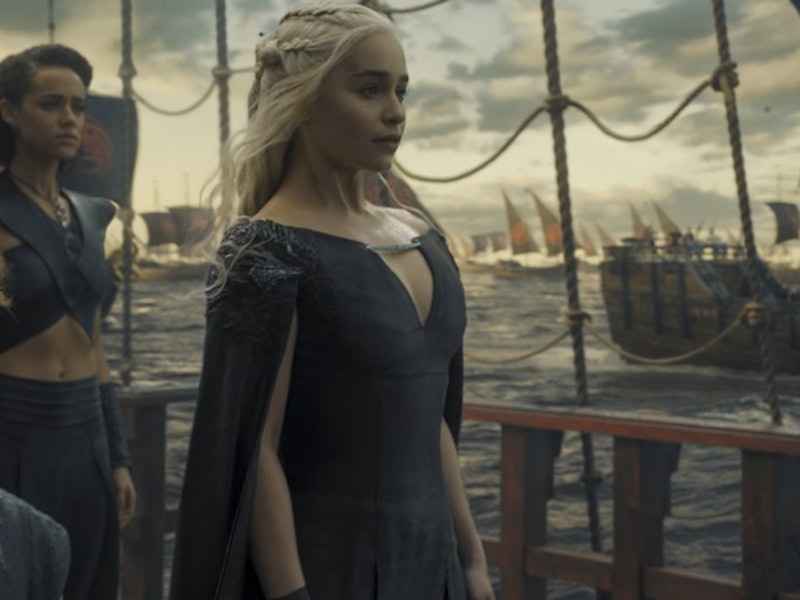 There's been a lot of talk lately about whether a very famous TV husband will come back to a very famous fantasy television show. I've been actively a part of the conversation, teasing the possibilities of Game of Thrones' Khal Drogo returning from the dead in Season 7 and greatly affecting the lives of those he left behind. There's strong evidence that if Drogo came back, he'd probably become Azor Ahai. This prophecy would directly affect Daenerys in a number of ways, mostly because she would be the modern equivalent of Nissa Nissa in the context of the prophecy, meaning she would probably die at Drogo's hands. This is not cool, my friends. In fact, the idea of Daenerys' path to the Iron Throne being directly linked to or affected by a man is the complete antithesis of her journey thus far in Game of Thrones. This leads me to make the bold claim that Daenerys should remain a single woman for the rest of her time on Game of Thrones, making her the best version of herself as a woman and a ruler.

For as long as Game of Thrones has been on the air, we've watched as Daenerys has navigated her way through the world as a young woman in possession of the right to rule. Yet she is still, in many ways, a young woman. While she may be in charge of an entire nation (the Dothraki) and commanding a massive fleet comprised of three armies, she is still maturing. Does she know her own mind? Her own moral compass? Her own heart — romantically, politically, morally, etc. — when it isn't affected by the counsel of others? I'd wager that she doesn't. It would be a far more interesting journey to watch a young woman come into her own self by herself than in the company of a husband.

Right now is a crucial time in her development in all areas of her life. To risk re-contextualizing herself in relation to a man would throw off all of the development she has undergone in previous seasons. It's not that she's a fragile character, but rather she is on the brink of becoming an all-out feminist ruler unfazed by the influence of men. This in itself is a major statement to make in the world she lives in. Aside from the obvious hunger to reclaim the Iron Throne and restore honor to the Targaryen name, Daenerys needs to figure out who she is as a ruler. It's all well and good to know your place in the world; knowing how you fit into that framework is equally as important.

This means ditching the possibility of marrying once she lands in Westeros. When she was leaving Daario behind in Slaver's Bay, she told him she would probably find a powerful man to marry. As we know, marriages can be as political as they are romantic; sometimes marriages are defined by one characteristic without the other. Daenerys seemed resigned to the fact that she would have to align with a powerful man in order to cement her place in Westeros. Given the nature of the upgrade in status, freedom, and empowerment the leading women of Game of Thrones saw in Season 6, I seriously doubt Daenerys would need to marry in order to keep her place at the top of the food chain.

At this point in Game of Thrones, being a woman is a unique benefit. Daenerys literally commands men right now. Why should she be forced to marry and include a man's opinion in her own decisions? That's not to say the man she could potentially marry would be controlling, I just want to illustrate that it is incredibly optional to Daenerys' life right now to pursue a political marriage. When Daenerys does solidify what kind of a woman she is personally and politically, I find it difficult believing she would kowtow to anyone's opinion (save Tyrion's), especially her husband's.

That said, Daenerys should also not be blocked from engaging in romance. I think there's a case to be made for Danerys experiencing, once again, the kind of affection she developed with Khal Drogo before his unexpected death. Just because Daenerys is arguably a better ruler when she flies solo doesn't mean she can't find romance. Once again, the options are extensive when it comes to who may romance the Mother of Dragons. Jon Snow? Jaime Lannister? Or possibly a mysterious suitor we've yet to meet? Anything is possible in this arena. I think Daenerys could and should be free to pursue a romantic relationship if she wants to.

At the end of the day, Daenerys holds all the keys to her happiness. There is nothing she can achieve with a husband that she cannot achieve by her own design. As a single woman, she's in a unique position at this point in Game of Thrones. Let's keep it that way.