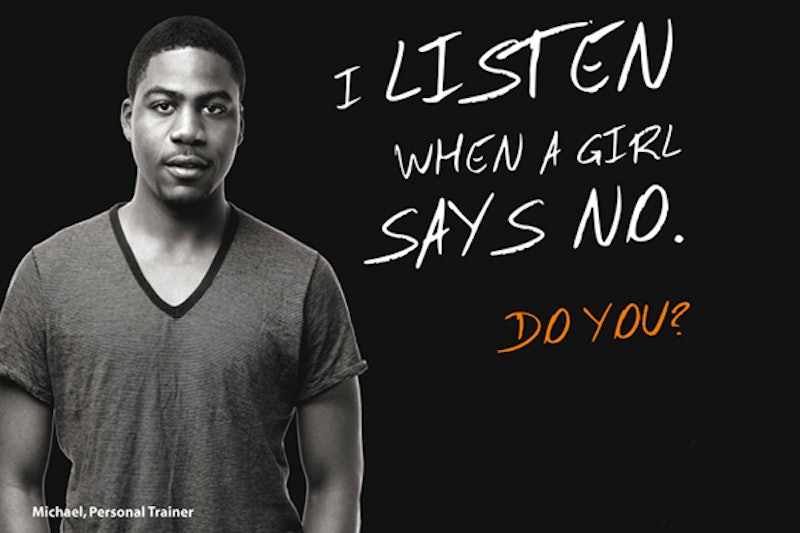 There's a very simple, five word sentence that most people seem to have a hard time understanding: Sex without consent is rape. You wouldn't think it would be so hard to fathom, but apparently it is. In Scotland, a police poster campaign backed by Rape Crisis Scotland, Assist, Scottish Women's Aid, and White Ribbon Scotland, is hoping to raise awareness about what constitutes rape and highlight recent changes to Scotland's sexual assault laws. And the result is pretty damned awesome.

Unlike many anti-rape campaigns that try to educate women about risks or teach them how to protect themselves — messages that women hear pretty much constantly from puberty onwards, if not before — this campaign speaks to men. You know that age old question of "Why do we teach women not to get raped and but don't we teach men not to rape?" Well, this was one of those rare times someone answered that question by saying "Hey, that's a good point. We should do that." Which is awesome, because I have quite frankly gotten tired of asking the question at this point.

And the campaign itself is pretty awesome. I mean, as awesome as poster campaigns ever get, anyway.

Here in America, the national organization Men Can Stop Rape also focuses on educating men, and has launched poster campaigns in the past. They currently have a poster series with the tagline "Where Do You Stand?" that's pretty awesome. However, Men Can Stop Rape is a non-profit that works with middle schools, high schools and colleges to educate students, whereas this new campaign in Scotland is an actual police initiative. As much as we love that there are so many non-profits looking to combat sexual assault, it would be wonderful if law enforcement itself would show a similar commitment.

Currently, however, law enforcement in the United States often seems as though they need a fair amount of educating themselves. Often when sexual assault survivors report their cases to the police — an act that takes incredible courage — law enforcement doesn't believe their story or doesn't take the case seriously. Only one in four reports of sexual assault to the police results in an arrest, and 20 percent of those are still never prosecuted. And the criminal justice system can also be incredibly callous and ignorant of issues survivors face; in one recent case a victim was arrested herself to force her testify.

Which is why the fact that a police campaign that focuses on changing men's behavior as opposed to victim blaming women is fantastic to see.

The campaign is also noteworthy for acknowledging that male rape, though statistically far less likely, also happens and is no less reprehensible.

Yeah, I'm a fan of just about everything about this campaign. It's not going to end the problem of sexual assault by a long shot, but it's a great step in the right direction. And the fact that it's coming from Police Scotland is a great sign.