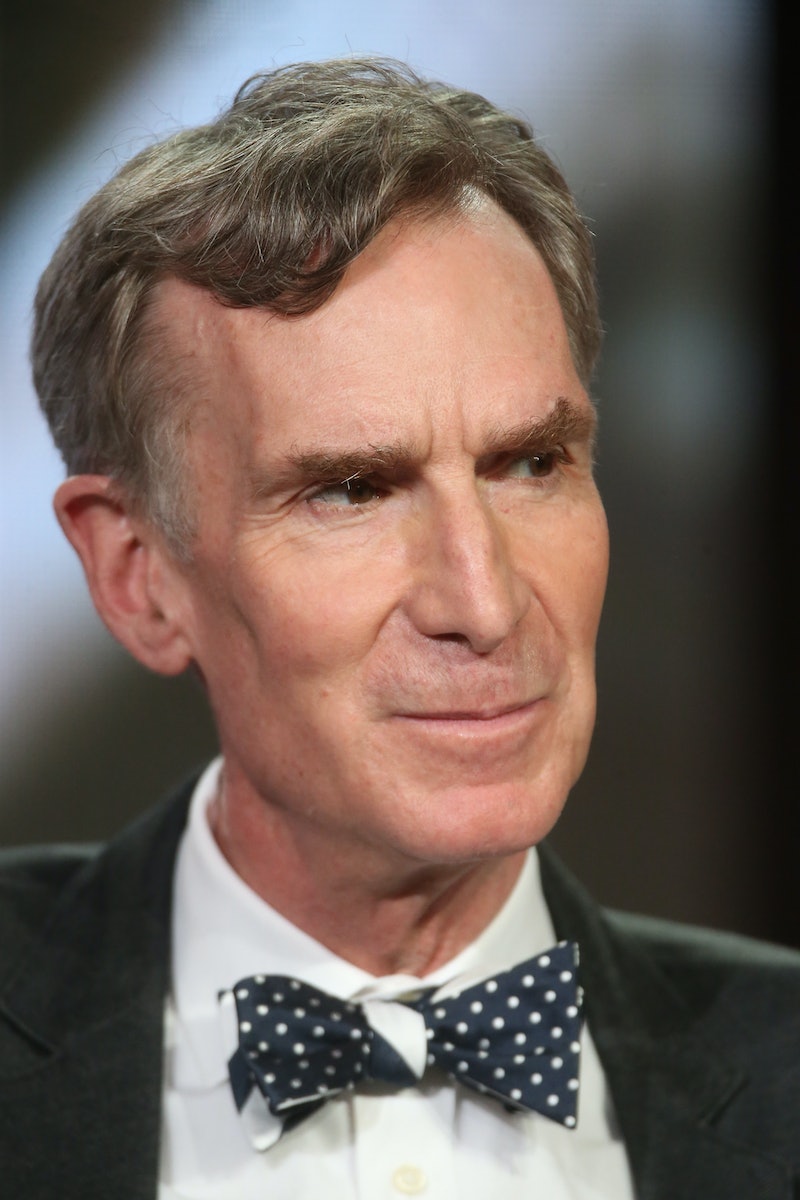 For a great many of us '90s kids, Bill Nye is indisputably cool. And, awesomely, he gets even cooler when you whisper his full name, as if you're invoking a great spirit: "Bill Nye, the Science Guy." Cool, right? Well, we're all going to be able to sink into our nostalgia for Nye and his '90s series very soon, because the man himself has a new show coming our way. Cue me doing a little happy dance — aren't you dancing too? That's right, Nye will host a science-themed talk show on Netflix. For many millennials, a Netflix show feels like a natural progression for the iconic star — we all watched him on VHS tapes in the '90s like we did all our favorite movies at the time, and now, we'll get to watch him on Netflix like we do all our current favorite shows. But, regardless of the format of his show, I'm just happy that Nye is ready to hop back into the role of leader and teacher. As a teacher myself, it's crystal clear to me that Nye is someone who has not only been teaching us about science all this time, but also big life lessons all along.

The lessons he taught us may have been simple or, at the time when we first saw him on television more than 20 years ago, subliminal. They may have been wrapped up in engaging visual or anecdotes. They may have just been a little bit silly. But, no matter which way you slice it, Nye was one of the best teachers we've ever had.

1. Don't Be Afraid To Have Fun

There is always room to find delight in this world. In his show in the '90s, he made science approachable and fun for us as kids. This thinking can be applied to any area in life: Why not take every chance to turn a frown upside down?

2. It's Cool To Love Science

Nye made science cool again. That's a bold claim, I know, but Nye's way of creating funny, oddball episodes that revolved around science is what made him so lovable and revolutionary. I'm sure we're not all working in STEM-related fields today, but I'd wager that hardly any of us Nye fans recoil at the discussion of science — and that's in part because of this man.

3. Fight For What You Believe In

In recent years, Nye has become an active voice in discussions about climate change. Many clips, including the one above, have gone viral thanks to Nye's calm, but firm assertion that climate change is real and is happening now. The debates are lively, to put it mildly, but watching Nye stand firm is wonderful to watch.

4. You Can Be Skeptical And Kind

As a scientist, Nye has always been one to present the facts to viewers. Even when faced with some big questions, Nye was able to give a balanced and logical answer. Case-in-point: On Big Think, Nye fielded a question about the existence of ghosts and the afterlife. Coolly, he said that he did not believe in ghosts or the afterlife for a variety of scientific reasons. His kind response was a big lesson for us all.

Curiosity is seriously the spice of life, and Nye exemplified that in every episode of Bill Nye the Science Guy. There may be an answer for every question asked, but are we all asking every possible question? Nye's scientific inquiries continue to inspire fans, and keep curiosity alive.

Nye and Neil deGrasse Tyson are actual #FriendshipGoals. These two genius scientific leaders are not only legends in their fields, but they also enjoy a close friendship. Tyson credits Nye as one of the best friends he's made as an adult, and I legit believe it. These two kindred souls are rays of pure sunshine.

7. What Kind Of Person Do You Want To Be?

Nye's 2013 Rutgers commencement speech is a thing of beauty. Not only is it full of quick quips and inspiring metaphors, but Nye also mades a cogent point about humanity. Around the 14:00 mark, he brought up the idea that humans are all the same, and that race should become nonexistent in our society. By saying this, Nye asked the class of 2013 what kind of people they want to be, and how they want to define themselves. It's an important takeaway for all of us, no matter how old we are.

8. Technology Is Your Friend

There was a time when computers were still a foreign and strange concept. Many millennials grew up with computers, but they were not as central a part of everyone's lives as they are for kids today. On Bill Nye the Science Guy, Nye not only introduced viewers to the technology that would become integral to our lives, but he also made it look super cool.

Why not find the thing you love most in this world and become a complete nerd for it? Nye certainly did, and look at him. He's literally living his best life. While science is Nye's nerdy thing, the lesson — to go find the thing we love and hold on to it — gets even richer when we're encouraged to become a total nerd about it.

10. We Should Keep Things In Perspective

Many of Nye's demonstrations were neat, visually engaging, and cheeky as hell. One of my favorite demos was when he showed viewers just how far apart all of the planets in our solar system actually are. While the idea was to keep things in perspective when it came to space, I think it's safe to say that keeping one's perspective is important for all facets of life.

11. Bowties Are The Perfect Accessory

Nye is fearless when it comes to fashion, and his bowties are a bold fashion accessory. Embrace a big sartorial statements like he does, and don't be afraid to let your personality shine through your clothes.

All this Nye talk has left me with the feeling that Nye is not only a genius, but also probably one of the best humans on the planet right now. What did we ever do to deserve him?

More like this
'Friends' Creator Marta Kauffman Opened Up About Misgendering A Guest Character
By Grace Wehniainen
Jesse Tyler Ferguson Had A Funny Run-In With A Fellow ‘Modern Family’ Alum
By Grace Wehniainen
“The Door Is Always Open” For Another 'Breaking Bad' Spin-Off, Says AMC Boss
By El Hunt
'The Undeclared War' Took Inspiration From This Gavin & Stacey Location
By Maxine Harrison
Get Even More From Bustle — Sign Up For The Newsletter