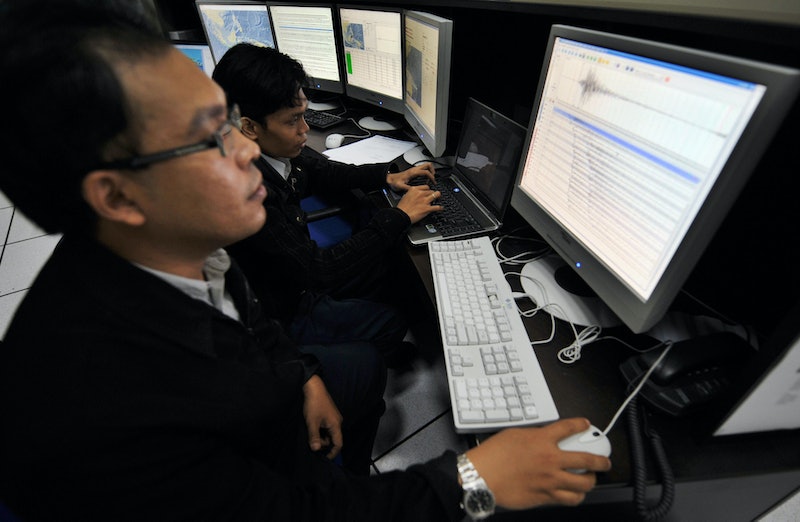 One of the strongest earthquakes to hit Oklahoma shook residents awake across much of the Midwest on Saturday. A 5.6 magnitude earthquake with an epicenter a few miles outside of Pawnee, Oklahoma, struck at 7:02 a.m. Saturday, tying a November 2011 quake of the same magnitude for the title of Oklahoma's largest earthquake. In Oklahoma, the tremor caused minor damage in some towns lying close to the quake's epicenter, with the majority of it seen in Pawnee where historical buildings bore the brunt of the tremblor's force. But how many states were affected by the Pawnee earthquake? Oklahoma, it seems, wasn't the only state sent shaking.

According to the United States Geological Survey, the quake was reportedly felt by residents across Oklahoma and throughout much of neighboring Kansas. Residents in parts of Arkansas, Iowa, Missouri, Nebraska, South Dakota, and Texas also reported feeling the tremor. However, while the earthquake was felt across a wide berth of states, reports of damage have come largely from Pawnee. Pawnee County Emergency Management Director Mark Randell told the Associated Press no buildings had collapsed, but some showed visible cracks. Oklahoma Gov. Mary Fallin reported three homes in Pawnee County had been damaged and one resident had been injured, although not critically.

While state officials in Oklahoma assessed structural safety in buildings and bridges across the state on Saturday to gain a clearer picture of the damage potentially caused by the quake, no damage had been reported in any of the other six other states where residents claimed to have felt the temblor.

Seismologists say it was the shallow depth of the Pawnee earthquake that likely enabled people as far as Nebraska to feel it and caused residents in Oklahoma to report experience intense shaking. The quake's epicenter was just 3.7 miles deep.

Although damage appears to have been minimal, the earthquake in Pawnee has added to mounting concern over the growing risk of human-induced seismic activity linked to energy production and fracking. Oklahoma has reportedly seen a rise in seismic activity over the last decade with local geologists claiming last year to have found links between the increase in quakes and how underground wastewater is disposed of during oil and natural gas production.

With residents scattered in towns and cities spread across at least seven states having reported feeling Saturday's earthquake, it's hard to deny the tremblor wasn't a major one. And while the quake appears to have caused minimal damage, could it spark a larger conversation about the effects of energy production?