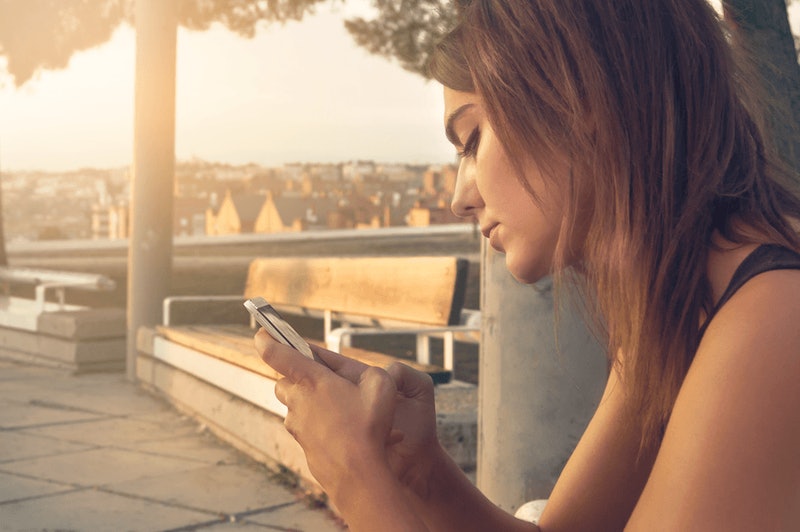 You're probably well aware of the classic signs that a partner is going to stray — they hide their phone, they stay late at work, etc. But what about the unexpected things that can predict cheating? These are the subtle signs that point towards a brewing infidelity. And they can come in handy, if you know what to look for.

Now, I'm not saying you should play detective on a 24/7 basis. Relationships should be all about trust, and zeroing in on would-be signs of cheating is no way to live — for you, or your SO. But it can still be helpful to tuck them away somewhere in the back of your brain, whether you two are having a problem or not.

"You are much better off knowing the warning signs of cheating before anything begins," says relationship expert Mara Opperman, in an email to Bustle. "It can not only save you from heavy heartache in the future, but can also give you an opportunity for open communication with your partner to discuss your concerns."

1. They Don't View Infidelity As A Bad Thing

Take note if your partner jokes about cheating, downplays its seriousness, or doesn't seem to view it as a problem. Research on infidelity has shown that this blasé attitude is one of the biggest indicators of a potential cheater, according to psychologist Antonio Borrello, Ph.D., on HuffingtonPost.com. When combined with other factors — like an over-confidence in their ability to snag anyone they please — you can pretty safely bet loyalty will become an issue.

If your partner's friends are all about cheating, then add this giant red flag to the mix. Having a social network that condones infidelity can influence someone's intention to cheat, according to Borrello. And doesn't that make total sense? I mean, if your SO is hanging out with people who try to hook them up, or are cheater's themselves, then infidelity will become all the more tempting.

3. Your SO Has A Lot Of Testosterone

If your partner is a total man's man, it doesn't mean he's going to cheat. But there is some connection between high testosterone levels (i.e., strong jawline, body hair, deep voice, larger muscles) and cheating. As Paul J. Zak, the founding Director of the Center for Neuroeconomics Studies, said in Psychology Today, "Testosterone has a potent effect on libido ... High testosterone males cheat more, divorce more, spend less time with their children, but are also highly focused and driven." Again, it's by no means a guarantee — just something to keep in mind.

4. They've Done It Before

You may be holding onto hope that your SO learned from past mistakes, but sadly that isn't always the way things work. "Often past history is a good indicator of future behavior," Opperman says. "Remember history tends to repeat itself. Did your partner cheat in [their] previous relationship? If so, you may want to ask yourself, 'why wouldn’t [they] do this again?'" Then ask him, too. This doesn't guarantee cheating, but you'll feel so much better if you can talk about your concerns.

5. Your SO Doesn't Defend You In Public

OK, so I'm not saying your partner should jealously cling to you while out in public. But there is something to be said for sweetly putting their arm around you, or showing the tiniest bit of protectiveness. It's what normal, healthy couples do — subconsciously or otherwise. If someone is more prone to cheating, however, they may have little to no response on that jealousy scale, according to Zak. And that's not a good thing.

6. He Or She Has Performance Anxiety

"Now, this may seem odd, but many studies have shown that people with sexual performance anxiety tend to cheat," Opperman says. The study, published in the Archives of Sexual Behavior, was one of the first to show that this "sexual personality" can affect infidelity, according to ScienceDaily.com. Pretty interesting, right?

7. They Are A Serial Monogamist

Has your partner jumped around from one intense relationship to the next? If so, it could be they're on the hunt for 24/7 excitement. "Serial monogamists are addicted to the thrill and passion of new love and bounce from one person to the next without regard for the pain they inflict," Borrello said. "The good news is they are not likely to cheat on their significant other while their relationship is intense and exciting. But when those feelings wane and their attention is drawn elsewhere, they begin a new relationship before the last one ends."

8. Your Partner Doesn't Have Very Many Close Relationships

Take a moment to think about all the people in your partner's life. Is he really close to his mom? Does she have any true, good friends? If not, it could be a bad sign. "Poor family relationships and few friendships suggest [they] may not be good at bonding to people, including romantic attachments," Zak said. And that could mean they won't find it particularly important to bond with you.

Researchers at Cornell, the University of Maryland, and the University of Colorado found there are a series of subtle linguistic clues that can predict when a betrayal is coming, according to Mark Prigg on the Daily Mail. Apparently, if someone is about to cheat, they'll become more positive and less polite in their phraseology. Whether or not you notice it, you'll start responding with more words that hint towards the future. "Victims used more planning words than their betrayers, further proof that [they] were unaware of the coming treachery," Prigg said. (Sad face.)

10. He Or She Is Being Selfish

One a scale of one to 10, how selfish is your SO? If you said "10" without hesitation, then infidelity might be a problem down the road. As Joe Amoia, a dating coach, noted on YourTango.com, "Guys who cheat do so because they are only focused on one thing — themselves. Guys who are selfish and self-indulgent tend to be like that in all aspects of their lives." Which means they'll likely snag an opportunity to cheat, should it present itself.

11. Your SO's Parents Had Marital Problems

Your SO's parents probably played an unwitting role in how he or she views relationships. If they were cold and distant, your partner might be cold and distant, too. "Or, if they had grown up with parents who never married, this is a potential warning sign for cheating," Opperman says. Of course, they could have learned from those experiences, so you never know. But it's worth keeping an eye on, all the same.

If you think your SO fits the bill, have a chat with him or her. It's much better to put your worriers out on the table, and talk it out, then it is to keep things to yourself.