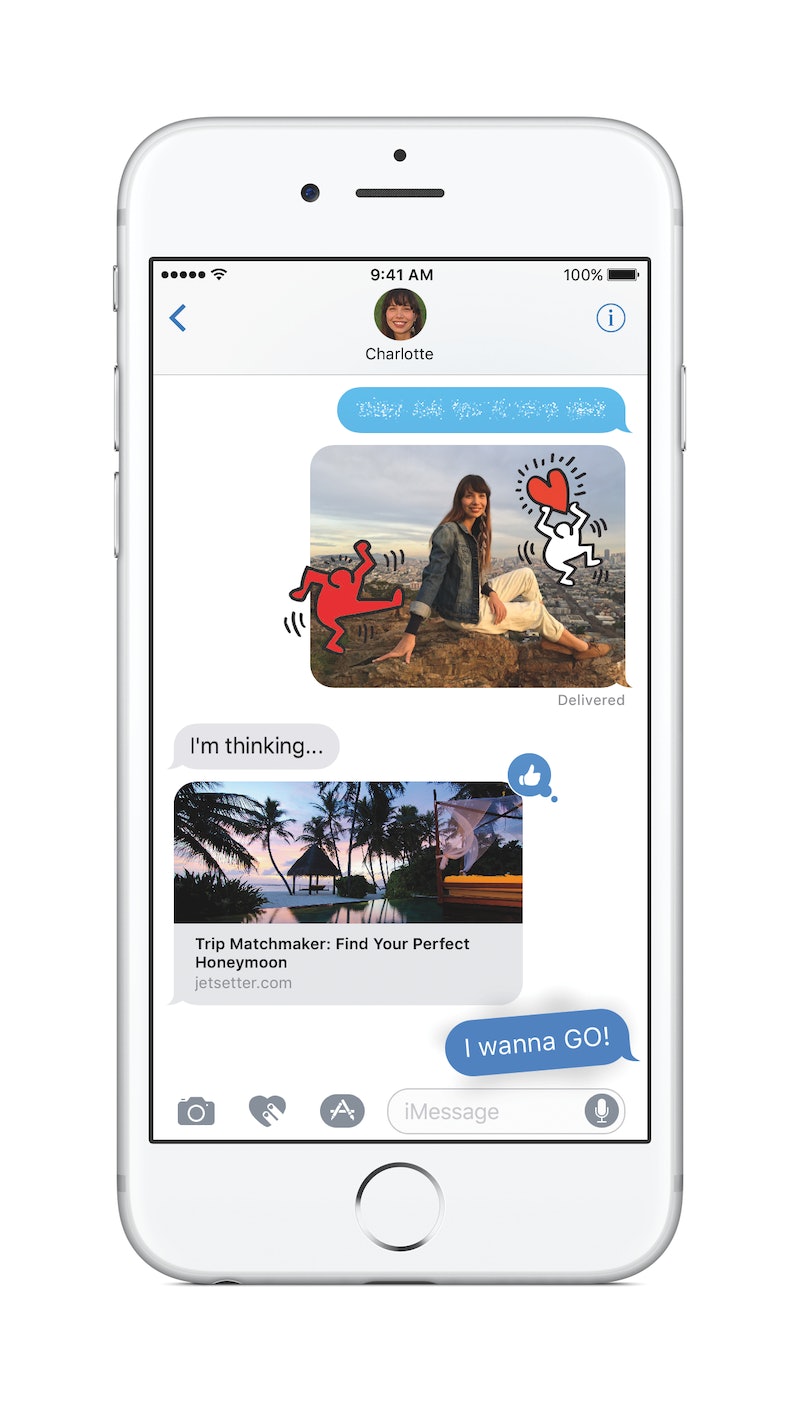 Well, iOS 10’s arrival date has finally been announced (Sept. 13 according to Wednesday's Apple keynote presentation, y'all!), and with it comes a whole bunch of new features. If you look at the text message screen in Messages, for example, you’ll see an icon that might not be familiar to you — something that looks like a heart. So what exactly does the heart icon in the iOS 10 text message screen mean? And why does it have two weird-looking lines running through it? What is this sorcery?

The good news is, we have answers: The heart icon brings a feature called Digital Touch to iOS 10. If you’re an Apple Watch user, then you’ll likely already know this feature; it originated on the wearable. In its original form, Digital Touch allows Apple Watch users to send sketches, taps (which are basically a way to nudge your buddy physically via the wearable), or your heartbeat to another Apple Watch — and now, users of iOS devices who don’t have Apple Watches will be able to use it, too. Progress!

For the curious, here’s what Digital Touch looks like on the Apple Watch:

Although the icon for iOS 10’s version of Digital Touch seems a little inscrutable at first, it actually makes a lot of sense when you think about it. The heart itself can represent a number of things: In a literal sense, it’s a pretty good indicator of the feature’s ability to send your heartbeat to another person; meanwhile, in a metaphorical one, it communicates sending your innermost thoughts to someone via a crafty little drawing. Oh, and those weird-looking lines on the heart? Those represent two fingers — the “touch” part of Digital Touch.

Mac World offers quite a useful rundown on how to use Digital Touch on iOS 10, so even if you don’t have it yet, it’s worth checking out. (Just, y’know, so that you’re fully prepared for when you do finally get iOS 10 and all the wonders it holds.) To access it, tap the heart icon near the input field in Messages. Once you’ve done that, feel free to doodle, add animations, and more. Here’s what the feature looks like in action on an iPhone:

But make sure you don’t lift your fingers totally off the screen until you’re ready to send your Digital Touch message: As Mac World notes, the moment you let go, the Digital Touch animation will automatically send itself to the recipient. Folks with iOS 10 and watchOS 3 will be able to see these animations in their natural form, while on iOS 9, they’ll have to be opened as attachments.