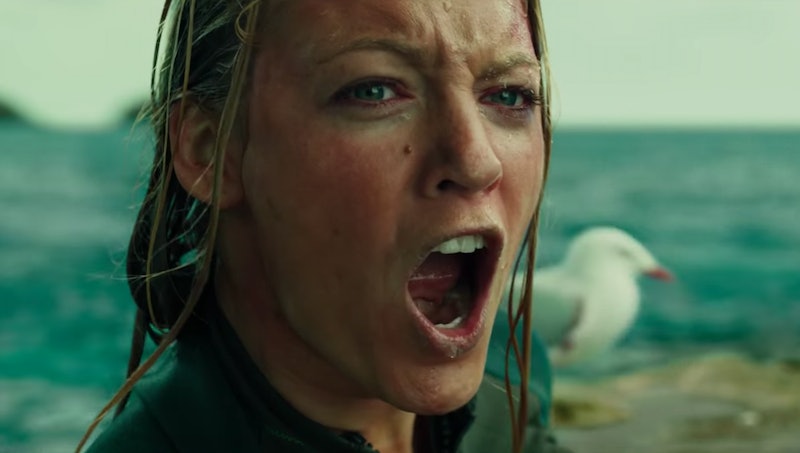 Blake Lively went head to head versus a shark this summer in the surprise hit thriller, The Shallows. A rare non-superhero, non-franchise movie to make a dent at the summer box office, The Shallows was all anyone was talking about for a few weeks after its June release. The movie stars Lively, of Gossip Girl fame, as Nancy, a young woman who goes on a surfing trip in honor of her mother. But, the "Paradise" beach she finds so enchanting at first quickly turns into a nightmare when she's attacked by a shark and left for dead on a rock in the shallow waters, just a few hundred yards from shore. Yeah, it's that kind of movie. But if you missed The Shallows in theaters this summer, it'd probably help you to know when The Shallows will be on Netflix.

Shallows fans and would-be fans will be disappointed to find out that The Shallows isn't on Netflix quite yet. But, before you get disheartened, keep in mind that The Shallows hasn't even been released on DVD yet. Officially, The Shallows will be released on Blu-ray and DVD on Sept. 27 — it's likely that the film will also be available for download on Amazon Video that same date. If you prefer iTunes to Amazon, you can pre-order The Shallows and get it on Sept. 13, though it's unclear when, or if, the movie will also be made available to rent via iTunes or Amazon Video.

Just because there are no explicit plans for The Shallows to hit Netflix streaming anytime soon doesn't mean it won't happen. The Shallows was a hit, making almost $100 million at the global box office (not bad for a film with a $17 million budget, according to Forbes) and getting decent reviews from critics and audiences alike. Still, it's a small movie at its core; while it's technically a high-profile movie because of Lively, it's not a big Hollywood production. As such, it's kind of a perfect movie for Netflix to start streaming soon after its release on DVD. (See: Legions of Kristen Wiig indies that pop up on the streaming service.)

If we're lucky, The Shallows will be streaming on Netflix sometime before the end of 2016. But, if The Shallows goes a more conventional route, fans might not get to stream Lively fighting against a great white shark alongside reruns of The Office until the spring of 2017. Either way, I'd say there's a pretty good chance The Shallows will find its way to Netflix streaming eventually. All you have to do is wait.