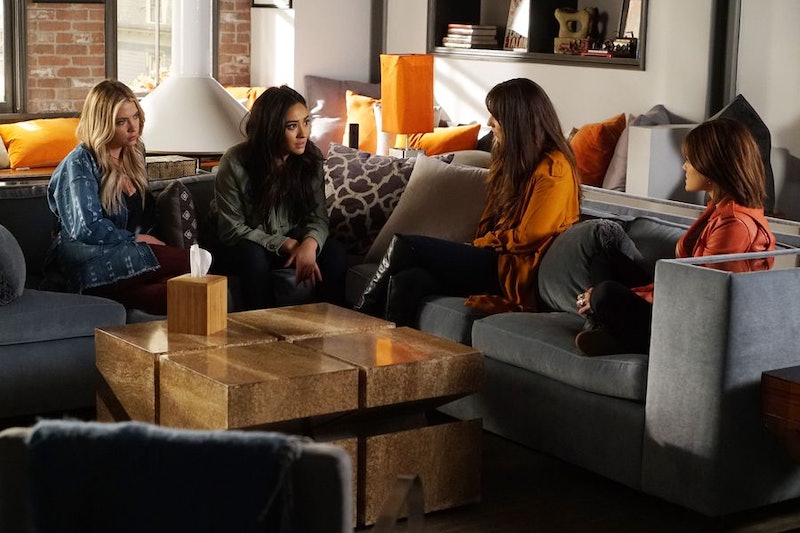 This is not a drill — when Pretty Little Liars Season 7B hits our small screens in April 2017, it will be the show's final season. Personally, I'm going to have to find a new hobby to fill the time that I currently use to theorize and speculate about the show's countless mysteries. Who is A.D.? Will Bethany Young's character ever become relevant? Why is the Rosewood Police Department so incompetent? And, of course, the Season 7A finale left us with a major cliffhanger after Spencer was shot and left fighting for her life. Then Mary Drake showed up to make things even more complicated by announcing that she's Spencer's mom. We'll have to wait until April 2017 to get our answers, but it's never too soon to analyze the Pretty Little Liars Season 7B promo for clues about what's to come.

First, let's recap the other major events from the 7A finale. Nicole is (*gasp*) alive and Aria received this news when she turned on the TV and saw Nicole and Ezra making out. (Ouch.) Haleb has officially reunited, and I can once again believe that true love exists. Oh, and Noel Kahn got decapitated (no big deal) while Toby and Yvonne ended up in a car wreck that may or may not have been fatal. Just another day in Rosewood. Now that we're up to speed, let's take a look at the 30 second promo for Season 7B:

Well, first of all, it's a major relief to see that Spencer is alive and being taken to the hospital when the season kicks off. If Mary Drake accompanies the Liars to the hospital, surely some blood tests can be conducted so we can figure out how exactly she and Spencer are (or aren't) related. Although there are no guarantees, something tells me Spencer is going to make it. Check out this shot, fifteen seconds into the trailer:

Emily and Aria are discussing the A game with a brunette who is too tall to be Mona. So, unless either Hanna or Ali dyed their hair (doubtful), it looks like Spencer will be fighting Uber A alongside her friends until the bitter end — so we can all breathe a sigh of relief.

Then, there's this intriguing shot of A:

Is it me, or does this character look way more like the original A than the masked villains we've grown accustomed to over the past season? Charlotte is dead and Mona was the first character to ever rock the black hoodie and gloves. Is she back in the A game, possibly with Lucas? They've worked together before and Lucas is a prime A.D. suspect. But, Mona's a tricky character to figure out — so she may be donning her old uniform in an effort to lure A.D. out of hiding and reveal his or her identity once and for all.

Then there's the matter of Aria, who many fans believe is a suspicious character. Although I've never been on board with the "Aria is A" theory, I have to admit there's a suspicious moment in the trailer. Check out this box that's being opened by a Liar wearing a pink jacket:

And look who's wearing pink in the very next shot of the trailer:

Could this have something to do with Aria's missing Radley file? Earlier in the promo, she's shown standing alone as she tells an unidentified person on the phone, "I don't want to lose. I want out." Is she desperate to get her hands on that Radley file before anyone else sees it — and if so, why? If the person putting on the black hoodie and gloves isn't Mona, perhaps it's Aria. If her file is truly that damning, it's possible that she'll be blackmailed into temporarily joining the A team. We've all seen that things don't go smoothly when one Liar attempts to take on A alone, so let's hope Aria doesn't get herself into a potentially fatal situation.

We've been on a wild ride since 2010, and it looks like the final season of Pretty Little Liars will be the most shocking one yet.

More like this
Everything To Know About A Million Little Things' Reported Final Season
By Brad Witter
The 'This Is Us' Finale Featured An Adorable Season 1 Jack & Rebecca Easter Egg
By Grace Wehniainen
Twitter Is In Tears After *That* Jack & Randall Parallel On 'This Is Us'
By Grace Wehniainen
Britney Spears Met The Weeknd & Sam Levinson, So She May Actually Be On 'The Idol'
By Jake Viswanath
Get Even More From Bustle — Sign Up For The Newsletter