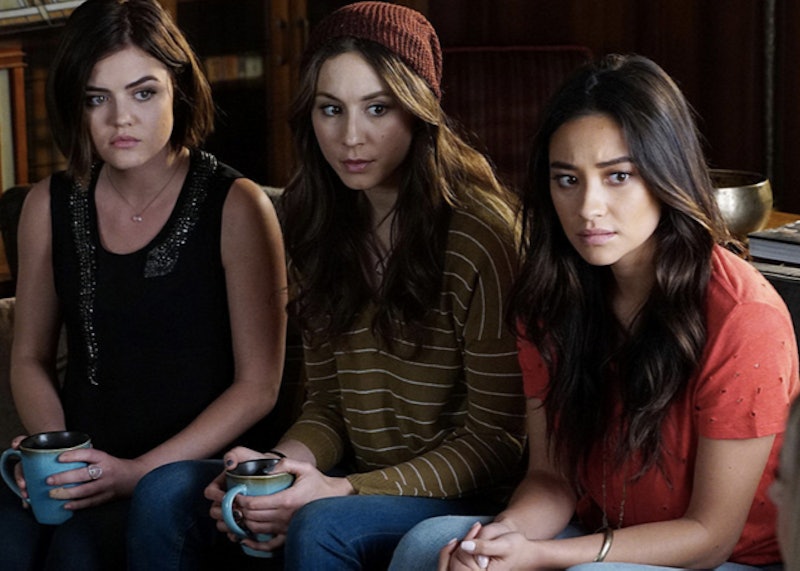 The shocking midseason finale of Pretty Little Liars answered several questions, but it also left a lot of things unanswered. We now know that Jenna and Noel were working for A.D. but supposedly didn't know the identity of Rosewood's super villain, and that Mary Drake gave birth to Spencer while in Radley. If these revelations weren't shocking enough, there was the return of Nicole, the decapitation of Noel, Toby's car accident, and Spencer's fatal looking injuries. Despite all of these events, we still don't know who's been terrorizing the Liars for the past seven seasons. So which characters could be A.D. on Pretty Little Liars ? Even after those midseason finale reveals, the list is long!

Despite getting shot, Spencer is definitely still a suspect. Even though he's out of the country, I personally wouldn't rule out Ezra. Aria has long been mentioned as the person with the most convincing motives, especially as she fled the country following Alison's disappearance, so she's still in the running. Even Alison has her moments. Paige has a habit of turning up at the most suspicious moments, and there's always been something a little off about Lucas. And don't get me started on everyone's parents and relatives on the show, because that's where things get really interesting. Here's everyone that could be A.D. on Pretty Little Liars .

Wren has been an obvious suspect for a long time. He hooked up with two of the Liars — Hanna and Spencer — which makes me more than a little shifty. He also has a British accent, and if Dr Rollins taught us anything, it's that the British can't be trusted!

Living with Wren in London, and previously married to super creep Ian, Melissa has long topped the list of A.D. contenders, and she's still out there.

The revelation that Mary Drake is Spencer's mother has made viewers speculate whether Spencer is A.D. more than ever before. As her parentage has been kept secret this whole time, Spencer has a very real motive for wanting to cause the level of destruction that A.D. has. It could very well be her.

Aria fled the country after Alison's disappearance, which doesn't look good. Add to that the countless fan theories insisting that Aria is A.D. and you have a pretty compelling argument.

Spencer and Melissa's dad is all kinds of shady. His affair with Jessica DiLaurentis resulted in the birth of Jason, and I wouldn't be remotely surprised if it turned out that he'd also had an affair with Mary Drake. Spencer's dad could definitely be A.D. as far as I'm concerned.

I don't really think that Hanna is A.D., but everyone is a suspect, and as long as she's alive, she's included in the list.

Remember when the Liars found out that Ezra was writing a book about them, knew Alison, and became a teacher at Rosewood to research his tome? His surveillance was pretty creepy when you think about it, and there's still a part of me that hopes he's A.D. afterall.

While I admit it's unlikely that Aria's mom is A.D., anything is possible at this point.

Despite the revelation that she is Spencer's mother, Mary Drake has been involved in lots of dodgy activities, including working with Dr Rollins. She can't be trusted.

Spencer's mom always seemed so reliable. But with the news that she adopted Mary Drake's child, it's possible that Veronica Hastings is involved in some illegal activity.

Do I think Emily is A.D.? Not a chance. But everyone is a suspect, even the perfect Emily Fields.

Mona knows an awful lot about everything. Plus, she's always in the right place at the right time. She's been A before, and it wouldn't surprise me if she turned out to be A.D., in fact, it would make a lot of sense.

Emily's mom isn't remotely guilty, but she does have a lot of time on her hands since her husband passed away, and everyone in Rosewood needs hobbies.

Aria and Mike's dad has had his fair share of controversy. Could he be A.D.? Your guess is as good as mine.

Caleb generally seems to be working with the Liars to take down A.D., but should we be concerned that the midseason finale revealed that he knows how Mona takes her coffee? And she knows how many sugars to put in his? Plus, anyone that moves to Ravenswood cannot be trusted, am I right?

His surname literally means "man of God". Could this be a massive clue that Lucas is in fact A.D., and has been all along?

Hanna's mom has always seemed really supportive and approachable. But she does run The Radley, the recently converted Sanitarium at which murders have taken place. Suspicious?

We don't yet know if Toby will live to see Season 7B. But given his past with Alison, it's still possible that Toby is A.D., or at least connected in some way.

Jenna's role in Season 7A was nothing short of amazing, and her connection to A runs deep. Jenna probably isn't A.D., claiming in the midseason finale to not even know who A.D. really is, but she certainly can't be trusted, which makes her a suspect.

It's been a while since we've seen Aria's brother Mike, but that doesn't mean he's escaped the suspect list. Having dated Mona, he has a connection to the A Team. He's probably not A, but he can't be ruled out for sure.

From spying on Emily, to lashing out at the mere mention of Alison DiLaurentis, Paige is a live wire and always has been. I'm certain she has some ties to A.D., and wouldn't be surprised if she's behind some of the awful events that have taken place in Rosewood.

Just because he hooked up with Aria, doesn't mean he's a good guy. Having unknowingly dated his sister CeCe Drake, Jason has been through a lot. His family life has been destroyed. Maybe he's after revenge?

It's difficult to believe that anyone's really dead on Pretty Little Liars. Since finding out that Charlotte was A in Season 6, I still think there's a possibility that she'll be back from the dead. Unlikely, but it could happen!

Is Pastor Ted A.D.? Probably not. But anyone that puts an engagement ring inside a giant cookie is some sort of psychopath if you ask me.

I don't trust Ezra's missing girlfriend Nicole. That is all.

The twin theory could still happen. As Alison's mom has a twin, we know that they run in the family. So what if Alison's twin is out there orchestrating all of this? Or the even more sinister option, what if Alison is dead, and her twin has infiltrated the gang?

We'll have to wait until April 2017 to find out who A.D. really is. Time to re-watch Pretty Little Liars from the start, and find those clues!