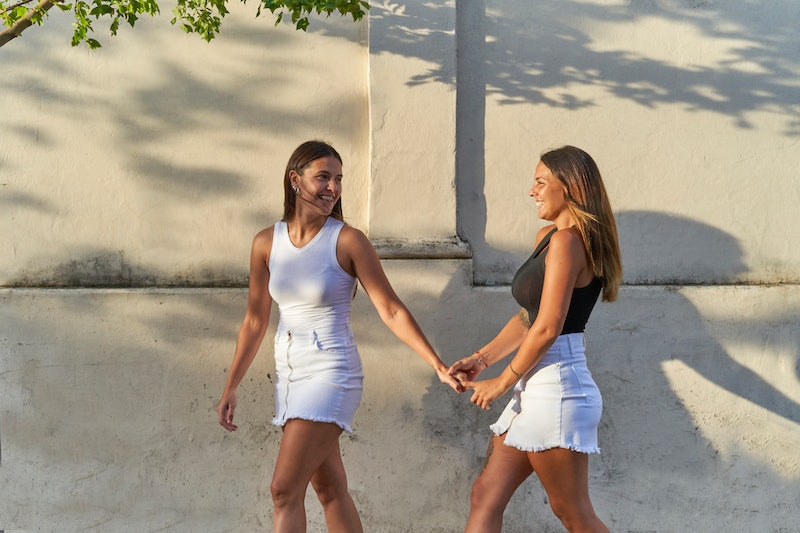 Adam & Eve sexpert Dr. Kat Van Kirk took this information to be positive; after all, 35 percent is a reasonable approval rating, and indicates that perhaps things are moving forward in terms of societal acceptance and homophobic attitudes. But the picture isn't necessarily all that encouraging to bi men and women wanting to date, as it illuminates one of the most persistent issues facing them as they try to find love: the spectre of biphobia.

Bisexuals have their own ways of dealing with the potential biases of others in the dating world. Some don't come clean about it until a little way into a relationship; others, like me, deliberately test the waters on the first date by mentioning ex-girlfriends or boyfriends, to see if the person has any issues. (I did this so successfully on my first date with my now-husband that he assumed I was gently hinting that I was a lesbian and therefore not interested. We figured it out, obviously.)

It seems that, on balance, bisexuality is still seen as a potential issue by many, and that bisexual men in particular are viewed as risky or undesirable dating partners. So what's really going on here?

Misconceptions about bisexuality are myriad and, for many of us, old hat. They generally come down to a basic definitional issue: People assume that being attracted to both genders means that we are having a lot of sex with both genders, and that attraction to one partner can never be sufficiently "complete" to ensure fidelity. It's mistaking the fundamentals of attraction for some kind of deep abiding "pull" to bed everything in sight.

The bisexual person is often seen as "promiscuous" and incapable of faithful monogamy, even though science dictates quite clearly that bisexuals are just as capable of monogamous relationships as anybody else. A 10-year study of bisexual women cited by Psychology Today found that, at the end of the study period, 89 percent of all the women studied were in long-term, faithful relationships. The myth of the bisexual who cannot be faithful is a powerful one — but it is completely unfounded.

And the frustrating thing is that misconceptions don't just originate within the straight community. Despite the "B" in LGBTQ, some gay people will express deep reservations about dating bisexuals. The issue is usually to do with worries about "trendiness" (no person wants to be an otherwise straight person's gay "experiment" as they try to look cool) or about long-term orientation; as some gay people originally identified as bisexual throughout the course of their coming out, it can be seen as a "phase" or "in-between" zone, a less serious orientation that represents a person either deluded about their straightness or uncomfortable with their gayness.

Bisexual identification isn't actually all that flexible (in the 10-year study I mentioned before, only 8 percent of the women had changed their orientation from bi to something else by the end). But the fact that bisexuals are, as Thought Catalog puts it, often viewed as "in denial" and "testing the waters" feeds into the myth that the identity can't be trusted.

The problem is exacerbated, as is clear in Adam & Eve's numbers, for bisexual men. "Bisexual women are often assumed to be in it to titillate men, whereas bisexual men are assumed to be gay men who are not brave enough to come out as gay," Meg John Barker of BiUK told Refinery29 back in May.

This exposes the problematic situation for bisexual men in its full light. It's openly societally acceptable that straight men find girl-on-girl activity "hot," and therefore believe that bisexual women may be OK as partners (though this reasoning is obviously harmful). But even though numerous studies have found that women are also huge consumers of male-on-male porn, bisexual men are much less accepted. Part of this, in the straight community, is likely due to straight-up homophobia, which creates the myth that men who sleep with men might be in some way "dirtier" or "risky" in their sexual practices. And among LGBTQ people, the imagined honesty issue, where bisexual men supposedly lack the strength to admit their "true" orientation, is key.

What The Survey Didn't Ask

Here's the really interesting thing about the study: Adam & Eve's customer base are, by definition, interested in sex and likely into a bit of exploration, as consumers of toys and intimate material. All things considered, that's likely a pretty open-minded demographic. And yet 47 percent of them, nearly half, would rather not date a bisexual, thank you very much.

The Adam & Eve surveyors missed a couple of important opportunities. For one, they failed to ascertain the sexual orientation of the respondents, so we can't categorize the results into straight or LGBTQ; that could have been a really valuable insight into different community attitudes to dating bisexual people. For another, they didn't ask for age. And finally, they didn't investigate further than whether the subjects would want to date a bisexual person; they didn't provide any opportunity to explain why, or why not. Possibly they worried that this would make respondents uncomfortable.

But frankly, when it comes to this issue, I think it's important to put people right up against their own prejudices. What is it about bisexuality that seems to make a non-ideal partner? Whether they ticked boxes about "infidelity", "disease", "indecision," or whatever else, it would have been a good insight into the issues of the community — and what bisexual people are really up against when they just want somebody to cuddle.

More like this
The 19 Best Tweets & Memes About Bisexual Awareness Week
By Lexi Inks
Wanna Try Hinge's New Video Prompt Feature? Here Are 7 Tips
By Lexi Inks
6 Dating App Tips To Try If You're Looking For A Serious Relationship
By Lexi Inks
Breeding Kinks Have Been On The Rise Since Roe V. Wade Got Overturned
By Lexi Inks
Get Even More From Bustle — Sign Up For The Newsletter