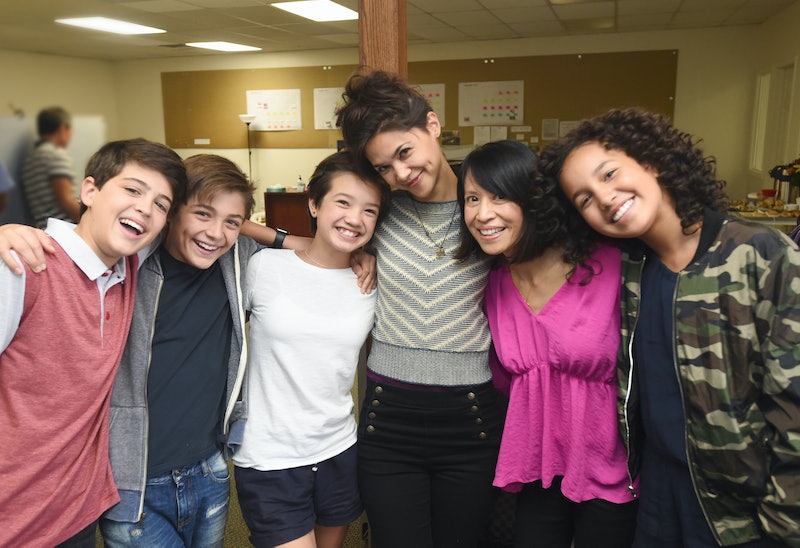 I've been excited for the new Disney Channel show Andi Mack for a while now, for no good reason except that it's created by Terri Minsky, the same woman who brought us Lizzie McGuire. (So, a very good reason.) The show was announced back in August, and it stars newcomer Peyton Elizabeth Lee in the lead role. While I felt good vibes, I didn't know enough about Lee to even speculate on what she'd be bringing to the set. Now that we have our first Andi Mack production still, I can see that it's brimming with so much good energy that it bodes really well for the chemistry of the cast.

For a photo like this announcing that production has begun — which it has, by the way, in Salt Lake City, Utah — we would usually get a sleek, produced portrait of the cast in character, to give us an idea of how they'll interact. Instead of going that route, the Disney Channel has released a casual, on set photo of the kids just being themselves, arms around each other and smiling directly into the camera.

It might not seem like a big deal, but bear in mind that production just started, as this series isn't set to premiere until 2017. Despite that, you can already feel how close and comfortable this cast is with each other. In addition to Lee, they've added Sofia Wylie as Buffy, "Andi's best friend and confidante," Lilan Bowden as Bex, Lauren Tom as Celia, and Joshua Rush as Cyrus, all of whom have previous credits. Then there's Asher Angel, who's new to the scene like Lee herself, playing Jonah Beck.

Just look at that body language. Everyone has their heads tilted toward one another, in relaxed, easy poses, and their smiles look really genuine to me. It's really telling that the network didn't elect to use a photo of them all working, or rehearsing a scene, but instead taking some time just to enjoy each others' company. That's a big sign of what to expect from the show overall.

Obviously, talent is important for a show like this, but I'd say cast chemistry is what really takes a program over the edge. Think about shows like the cancelled-too-soon Sam & Cat , where Ariana Grande and Jennette McCurdy played off of each other perfectly, or Kenan & Kel, who were literally given a show together because their personalities gelled so well on screen. The secret seems to lie in being friends in real life, and, if the first photo is any indication, Andi Mack already has that kind of camaraderie radiating outward. I can't wait to join in on the fun when the show premieres.