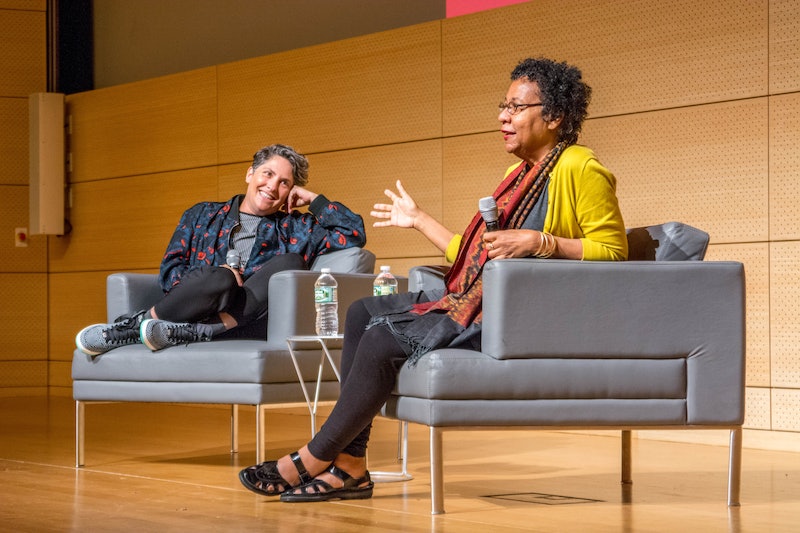 You'd be forgiven for not associating feminist author and activist bell hooks with dating advice. After all, this woman is mostly known for driving much of the conversation surrounding the way race, class, gender, and capitalism influence systems of oppression. She's known mostly for her revolutionary ideas and her commitment to knowledge (her devotees likely know of and aspire to her "book a day" reading regimen), but during her talk with Jill Soloway at the New School's Eugene Lang College in New York on Sept. 6, hooks also made something very clear: she urged her audience to move away from binaries so that we can recognize that, in general, "people are not all one thing." Including hooks herself. And yes, that means that among her ideas about oppression and feminism, bell hooks also has words for people who give the dreaded dating "advice" that every successful woman hates to hear.

The talk focused on autobiographical storytelling and how the personal is inherently political, and the conversation got very personal for hooks, who told the audience that she struggles to be alright with her success due to the inherent abjection of being a woman in western society. After founding the bell hooks Institute and seeing her image and her words everywhere, hooks said she thought, "There's just too much bell hooks." As almost every woman can attest, hooks isn't the only person who sometimes views her own success as "too much."

The renowned author and activist was very open about the fact that she is, as she put it "looking for love," but that many people have told her that it's hard because she's "so intimidating" (a fancy way of saying her success is "too much," really). Every single woman who's ever considered herself to be mildly successful or to have aspirations of success knows the sting of this exact comment. It hurts, and the way hooks puts it, "it's another version of 'you're crazy,'" But her response to the "advice" is something I'm absolutely going to keep in my back pocket the next time someone throws the well-intentioned barb my way.

"Why do people want to make me the problem?" hooks asks, adding that she's proud of her success. "I can't believe I did all of this," she said. But of course, it all boils down to a great point that hooks was making: that women feel societal pressure to be small or lesser than, and to not sing from the rooftops that their successes are their own and something they're so, so proud of.

But the more women can tell themselves that our successes are not the problem, the more confident we can all be in our endeavors to be open to that possibility of connections, whether we are world renowned scholars or not. And whenever that little mantra gets difficult or feels out of sync with your day-to-day, just remember: your success isn't the problem — bell hooks said so.