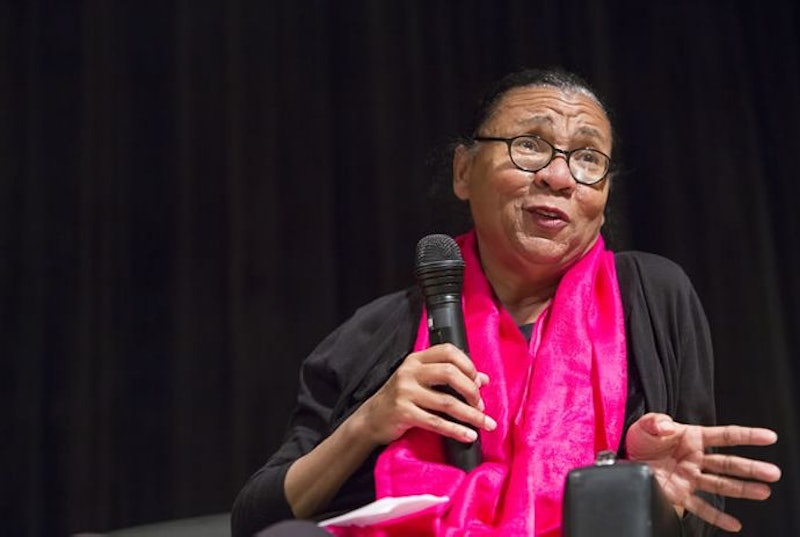 If we've learned one thing from feminist scholar bell hooks's recent panel at The New School, entitled "Whose Booty Is This?", it's that she's disenchanted with the current big booty phenomenon and the presentation of black women in the media. Whereas before the question of "Whose pussy is this?" (made popular by Spike Lee’s 1986 film She’s Gotta Have It) reduced female sexuality to our lady parts alone, hooks argues that the butt has taken on a similar role. Only this time big booties carry with them certain racial connotations that have been popularized by the media.

Take, for instance, the line from Beyoncé's Drunk In Love, "Can't keep your eyes of my fatty, daddy," or Nicki Minaj's Anaconda video. On the surface, these songs appear to be sexually liberating, but hooks implies that they're perfect examples of the fact that overt expression of sexuality isn't synonymous with feminism.

In fact, hooks goes so far as to claim that Beyoncé's image is "silencing" because it "does not allow for a reading of black history." Rather than represent "the arenas where black women work in silence," Beyoncé's appearance and behavior is effectively mainstream. Still, hooks argues that she doesn't dislike Beyoncé, saying that the two of them “need to talk.” It's also important to realize that what she discusses in her New School panel is far greater than any one artist: it's a commentary on the entirety of media culture, which often conflates wealth and beauty with race and sexuality.

So whether or not you're a huge supporter of Beyoncé's brand of feminism, it is at the very least thought-provoking to consider why she has become a feminist icon, and how her message relates to black culture. And although some of what hooks says in "Whose Booty Is This?" is controversial, the panel was a fascinating blend of humor and insightful feminist commentary. Here are some of hooks's best quotes from the discussion:

3. "If I’m a woman and I’m sucking somebody’s dick in a car [...] and we could be in one of those milk commercials or whatever, is that liberatory?"

..."Or is it part of the tropes of the existing, imperialist, white supremacist, patriarchal capitalist structure of female sexuality?”

4. "Can we imagine Beyoncé with her dreadlocks moving the hearts and soul of all the white people who claim to be so moved?"

5. "Even with Beyoncé, even with all her talent, her looks, everything, people wouldn't be so into her if it wasn't that she was also so rich."

She goes on to say, "There’s a lot of booties out there that are glamorous but not connected to the fantasies of wealth [like Beyoncé's] — and we equate wealth so much with freedom."

6. "I wish for black girls and black teenage girls that [Carrie Mae Weems’s photographs of black women] were as accessible to them as the images of pop culture that are limited in their vibrancy and even in their beauty."

The full panel discussion can be seen here: