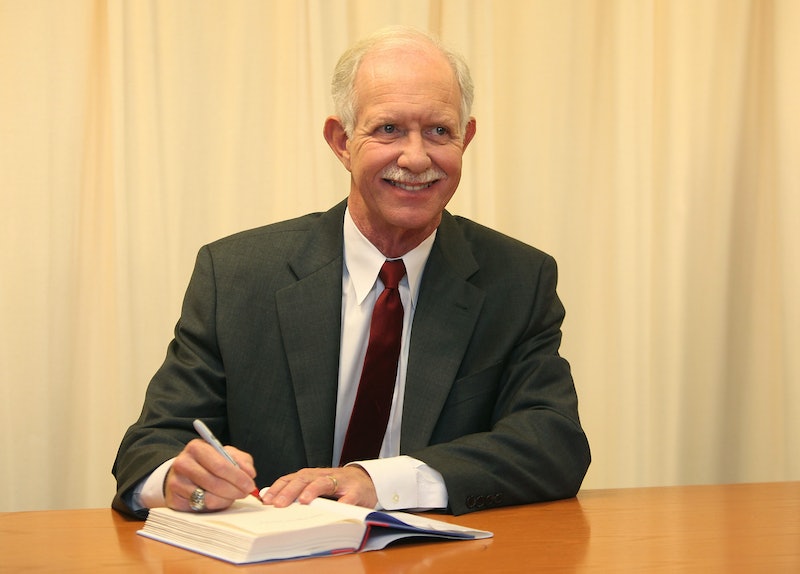 As the meme goes, "Not all heroes wear capes." Some, like Chesley "Sully" Sullenberger, wear a white mustache and a gold pair of wings on their lapel. Tom Hanks plays the heralded airline pilot in the biopic Sully , debuting in theaters on Sept. 9. Captain Sully became a walking symbol of heroism and quick thinking in 2009 when he executed the emergency landing of a distressed commercial flight on New York's Hudson River, saving all 155 people on board. As the movie recounts, not all responses to the captain's skillful actions were congratulatory. A federal investigation was launched to assess the crash and the flight crew's methods. According to the Wall Street Journal, that probe took 15 months to close and placed Sullenberger under a microscope. At the risk of spoiling the movie, the conclusion of the investigation was that Sullenberger had acted in the best interests of the lives that were in his hands. After all that attention, is Sully still flying the friendly skies?

ABC News reported in 2010 that Captain Chesley "Sully" Sullenberger would be retiring from US Airways. He had been employed with the airline since 1980 and was 59 years old when he took his final leave. Sullenberger didn't return to a regular flight rotation after "The Miracle On The Hudson." He took a break from work, some of which was spent giving interviews and receiving accolades. He even attended Barack Obama's inauguration at the personal invitation of the President elect and his family. When Sullenberger went back to his employer, it was mostly in a safety consultant capacity.

Since walking away from his career as a pilot, Sullenberger, a married father of two, has dabbled in others. The movie Sully is adapted from his 2009 memoir, Highest Duty: My Search for What Really Matters . In 2012, Sullenberger authored another non-fiction book, Making a Difference: Stories of Vision and Courage from America's Leaders, his quest for leadership advice from achievers in several different industries. The former pilot regularly appears on CBS News as the network's Aviation & Safety Expert and weighed in several times about missing EgyptAir Flight 804. He's represented as a public speaker by The Harry Walker Agency; his bio states that Sullenberger "discusses with audiences how education, teamwork, preparation and creating a culture of quality and safety can improve any organization." The crew, passengers, and first responders of "The Miracle On The Hudson" have regular reunions, at which Sullenberger is the most honored of guests.

The subject of Sully has taken an active role in promoting the film alongside Hanks and director Clint Eastwood. In a recent interview with Variety, Sullenberger praised the filmmakers for getting it right and recalled the culture of pessimism and defeat that ruled at the time of the crash. Though he was plagued with nightmares other symptoms of PTSD after Flight 1549, Sullenberger was encouraged by letters of support that he received. He said:

I wanted that sense of our common humanity to be a big, underlying current in the film, and it really is. This happened at a time, after the 2008-2009 financial meltdown, when it seemed like everything was going wrong. People were wondering if everything was about self-interest and greed. They were doubting human nature. Then all these people acted together, selflessly, to get something really important done. In a way, I think it gave everyone a chance to have hope, at a time when we all needed it.

Chesley Sullenberger may be retired from professional aviation, but now he can relive his shining moment anytime he likes.

More like this
President Zelensky Spoke Out On Ukraine's Chances Of Hosting Eurovision Next Year
By Sam Ramsden
Where Is Dr. Cline Now?
By Morgan Leigh Davies
Rebekah Vardy & Coleen Rooney’s Trial Has Officially Begun
By Bustle UK
Twitter Was Saying The Same Thing About Sam Ryder’s Surprising Eurovision Result
By El Hunt
Get Even More From Bustle — Sign Up For The Newsletter