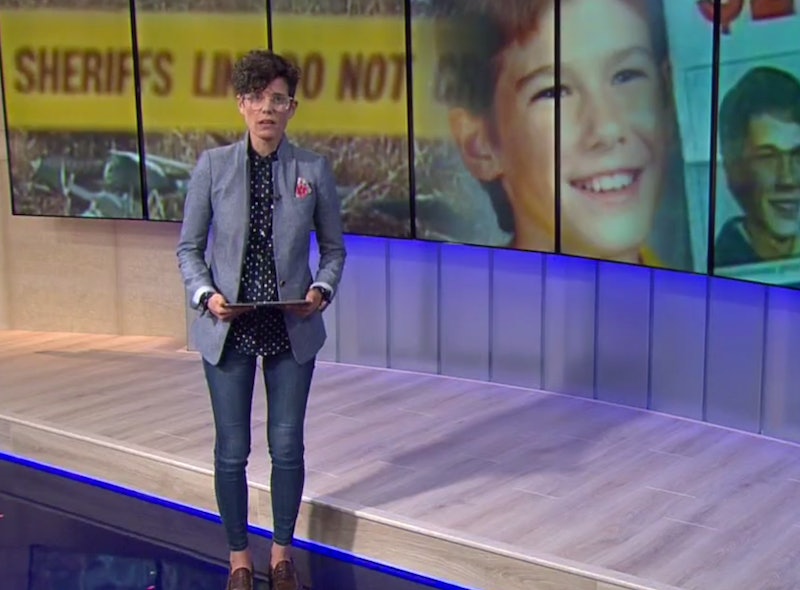 Here we go again: Yesterday a Star Tribune columnist criticized a news anchor for wearing skinny jeans on air. Yes, you read that right: Skinny. Jeans. Jeans that are SKINNY. Can you even imagine? How could anyone possibly listen to the news when an outline of FEMALE LEGS is visible? Guys, if I had pearls, I’d be clutching them so hard right now they’d shatter.

OK, so I'm being silly, but this is far from the first time we’ve seen a female reporter or meteorologist criticized for her clothes or body. Just look here, and here, and, oh look, here’s another one, if you need proof. However, the context of this particular situation makes the criticism especially gross: On September 6, KARE 11 anchor Jana Shortal reported on the latest news in the case of Jacob Wetterling, who was kidnapped at the age of 11 in 1989. On Tuesday, Danny Heinrich confessed to kidnapping and murdering the young boy. It’s a devastating end to a story that has haunted Minnesota for almost three decades, and Shortal spent a major portion of her show, Breaking the News, reporting on the case and the reactions of Wetterling’s grieving parents. Throughout the report, Shortal wore a button-down shirt, blazer, and form-fitting jeans. (You can see Shortal’s coverage — and her outfit — in the video below).

You might think that, in the face of a tragedy that few of us can even imagine, Jana Shortal’s clothes would top the list of “Things Most Irrelevant To This Story,” and yet that was certainly not the case for C.J., a columnist for the Star Tribune. Jezebel reports that, on Tuesday, C.J. published an article criticizing Shortal, not for her job performance, but for her pants. Yes, pants. The article has since been deleted, but according to a cached version, C.J. wrote:

[Shortal] looked great from the waist up in a polka-dot shirt and cool blazer, but the skinny jeans did not work. I was among a number of media types who found them inappropriate and, given the gravity of the day’s subject matter, downright jarring.

C.J. went on to suggest that Shortal’s pants were not simply inappropriate, but actually disrespectful to the grieving Wetterling family:

My thoughts are also with the Wetterling family. While I cannot imagine they’ll want to read or watch every media take about the horror they have been living, I would think that hipness wouldn’t be a priority while covering one of the biggest, saddest stories in Minnesota history. ...

Being hip in skintight pants while discussing this story was unseemly, perhaps disrespectful. Many TV types keep a spare set of clothes around the station just in case what they are wearing isn’t appropriate for what they end up covering. Maybe Shortal doesn’t.

There’s a glaring irony in the fact that, even as C.J. criticized Shortal’s clothing in covering the Wetterling story as inappropriate, C.J.’s own reaction to the horrific tragedy was to focus entirely on one reporter’s pants. If anything seems like a “jarring” response to the murder of a child, it's C.J.’s bizarre decision to pen a whole article about Shortal’s attire.

Shortal’s responded, “IDK what my clothing has to do with covering the tragedy of Jacob's death. My only 'wish' on Tuesday was for Jacob's family.”

C.J.’s criticism in the Star Tribune is especially weird when you consider the fact that the Star Tribune published an article by Shortal about her clothing style only a few months ago. In a June article titled, “I'm a TV newswoman, and no thanks on the lady uniform,” Shortal recounts how difficult it was for her to break away from the type of clothing usually assigned to female journalists. She explains that when she started working on Breaking the News, she still wasn’t sure if she could follow her own style on air:

On Tuesday morning I got dressed. The light on my porch woke me up. Jacob's light, his sign, to come home. Sick to my stomach I got dressed. Dreading the day I got dressed. Knowing I would learn, with all of you, what really happened to Jacob Wetterling. I dressed. I prayed. I went to work. … I gave that newscast every single shred of hope and love I had for Jacob. For his family. And for every single one of you who was hurting. I left everything I had on that newsroom floor. And today. You took that away. You made it about my pants. You. You, whose name I will never write again. You. You with the column I will not link to. You. The bully with the keyboard who took this night, this story, and made into gossip about my pants. Shame on you.

Last night, the Star Tribune took down the article and issued an apology on Twitter, describing the column as “inappropriate” and “insensitive.”

[T]his isn't about me. It is about the blatant disrespect of the Wetterling family and our greater community. It is about the fact that our newspaper of record employs a woman who has for decades cashed a paycheck by bullying others. The Star Tribune is sorry. But that woman is not.

Indeed, C.J. has responded to the controversy with a series of flippant tweets:

Shortal also took to Twitter, this time to thank her supporters.

Her message is simple and strong: “Be good. Be you. No matter the bullies. They go low, we go high.”

More like this
‘90s Streetwear Brands That Are Making A Major Comeback
By Dominique Norman
5 Mini Skirt Outfits To Wear, Inspired By These Brave Souls
By Avery Matera
How The City Healed Five Years On From The Manchester Arena Attack
By Ella Glover
Michigan’s Governor Is “Going To Fight Like Hell” To Protect Abortion Access
By Andrea Zelinski
Get Even More From Bustle — Sign Up For The Newsletter