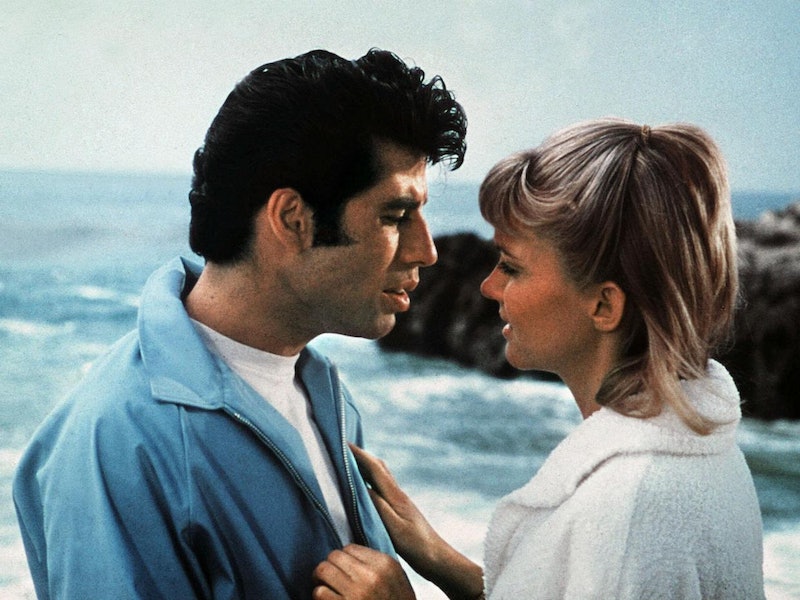 The internet is certainly filled with crazy theories, but this new theory about Grease may be one of the craziest yet. No surprise, it comes straight from Reddit. One user named atomicbolt questioned Grease 's flying into the clouds ending, believing it's just a little too perfect. Somehow, the user managed to then find a way to make the movie's happy ending a rather morbid one that will have you questioning everything you thought you knew about Grease. The theory is that Sandy was dead the whole time. Yes, this definitely sounds very Sixth Sense, but, if true, it means Grease may have the most shocking twist ever put to film.

The theorist, who came up with this idea three years ago, claims that, when Danny sings that he saved Sandy's life before "she nearly drowned" in "Summer Nights," he in fact didn't. She really did drown. The whole movie is actually Sandy's fantasy of what could have happened if she survived. Or, as this theory proposes, "the entire movie was a drowning woman's coma fantasy."

It's hard not to be skeptical of this very unlikely theory, but, to this Redditor's credit, they do manage to give some credence to this idea. Not that there aren't some holes in this plot theory, too. To further investigate this newly resurfaced claim, it's worth looking at the evidence presented and then asking a few follow-up questions.

The theory begins by looking at the opening beach sequence, which has the two young lovebirds fooling around in the surf. While this may look innocent to the average viewer, to this Redditor user, it's a clue that hints at the tragedy that would come. Atomicbolt believes "as she drowned, the brain deprived of oxygen, she had a vivid coma fantasy involving her summer fling Danny, where they shared a magical year of high school together."

Now, it is surprising that the two end up going to the same exact school, but never managed to talk about it in their time together. But it's not so crazy that I'd jump to the "she's dead" conclusion. People do move. Summer flings are meant for just that season, and the two may have preferred to keep things in the now instead of getting to know each other deeply only to separate forever. This was pre-internet.

Sandy's explanation that she didn't go back to Australia because of a "change of plans" does raise a few flags though. That seems like a plan you couldn't just go and change at the last minute. But it doesn't seem like a clear sign that she's recently deceased; instead, it seems like a sign that her parents may not be great at making plans. Or that Sandy is a little bit of a stalker.

But the theory then goes on to question all those "outlandish" visions that occur throughout the movie, believing the only explanation is that Sandy has dreamt up her own vision of what her senior year of high school could be as Danny tries to resuscitate her. It's true that there are random musical numbers and visions in this movie that make very little sense: Frenchy's teen angel who encourages her to go back to school, Danny and his T-Birds' magical car rebuilding montage, and, of course, that flying car.

When it comes to explaining the flying car, the theory believes that it's actually Sandy riding off to heaven in that red convertible. Honestly, that's as good an explanation for the ending as anyone's come up with. Even Jim Jacobs, original co-creator of the play, admitted to The Daily Herald in 2010 that the ending to Grease confuses everyone. He says it's not about Sandy becoming a leather-clad chick for her new guy, but, instead, a "good old-fashioned razz against those... Hollywood movies that turned the main guy into a fine, upstanding citizen." Sure, that's what it is. But that still doesn't really explain the car.

Another Reddit user, Randomd0g does point out that the ending of Grease feels like it's all in Sandy's head, just like so many of those visions. They're all quite innocent, which could point to them being a figment of Sandy's imagination. They don't compare her to Sandra Dee for nothing."Danny and Sandy are back together despite everything, Rizzo SUDDENLY isn't pregnant AND Kenickie suddenly decides that he actually loves her, the geeky kid gets onto the sports team," the Redditor writes. "EVERYTHING is suddenly ok, just the way that sweet, innocent Sandy would have wanted it to be. And in the last shot of the movie, she flies up to heaven with her dream boyfriend in her magic flying car."

But while the flying car is a strange way to end the movie, this is a movie, which means, technically, anything is possible — even the most outlandish of events. It's the hitch in this theory, and another one that claims that actually Danny and Sandy are both dead. (He allegedly dreams up his final year of high school after losing his life trying to save a blonde girl he names "Sandy.") This "Sandy is dead" theory rests so fully on the idea of this car being her transportation to the other side, and it's surely an absurd ending to have two people ride off into the clouds, but there are a lot of moments in Grease that get more absurd the more you've seen the movie.

The truth is, whether this theory is true or not, it's clearly bursting all of our bubbles about Sandy and Danny's high school romance. It really all comes to down to whether you believe in fairytale love where cars can fly. Personally, I prefer to keep my head in the clouds on this one.