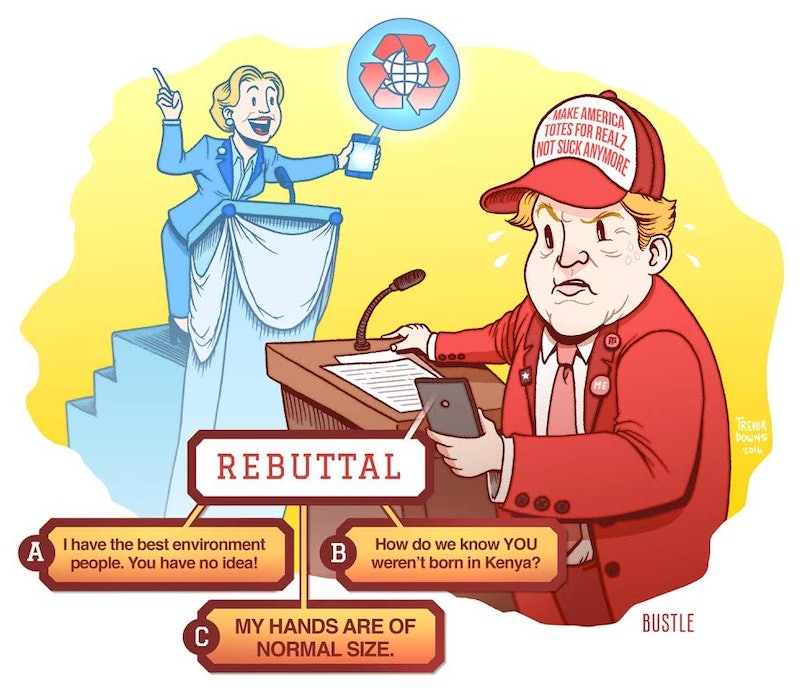 The summer of 2016 was characterized by two things: the presidential race between Hillary Clinton and Donald Trump, and the Pokémon Go craze. The latter might be winding down, but that doesn't mean we can't daydream about the glorious combination that would be Election Go in 2016 — that is, the 2016 election made into a Pokémon Go-like game. After all, if Harry Potter fans are allowed to petition for their own magical augmented reality game, news enthusiasts deserve the same. And frankly, the 2016 election cycle has been outlandish enough that it seems scripted at times anyway.

If you've managed to avoid Pokémon Go so far, you're either an alien newly arrived to Earth or Tom Hanks in Castaway. In the event that you fall into either category, here's what you need to know about the game that took over the planet in July: Pokémon Go is an augmented reality game that allows you to "catch" Pokémon in real life, using a combination of your phone's GPS and camera. Everyone from '90s kids to actual kids went totally bananas over its existence, and for good reason — aside from the inherent awesomeness of finding a Snorlax chilling outside your bedroom window, Pokémon Go just might usher in an exciting age of new technology.

But that's far in the future, and to borrow the rhetoric of political candidates everywhere, we need to focus on what's happening in the grand ole United States today, which brings us back to Election Go. Illustrator Trevor Downs imagined what an augmented reality election-themed game would look like, and the results are enough to make even the weariest citizen want to get out there and vote. Let's take a look at what Election Go might be like.

In the grand ole U.S. of A., anyone can run for president.* So suit up your candidate in their very best pantsuit and patriotic tie — maybe even a campaign button if you’re feeling adventurous. It’s time to go hunting for votes, and there’s no better way to do that than by collecting issues on which to take a stand. At the very beginning of the game, you choose a party to affiliate yourself with: Republican, Democrat, or third-party. Just like real life, the first two parties are more powerful initially, but third-party candidates have an easier time coming across issues on their journey to the White House.

*Rules and regulations may apply.

Once you've chosen your avatar, it's time to start hunting for issues like Education, Foreign Policy, and the Environment. Each new issue gives you a boost in the polls, which comes in handy when you come across other candidates. Along the way, you can find campaign staff to help you snag endorsements.

So what happens when you run into another player? Candidates battle for ownership of electoral districts; when you win a debate, you go up in the polls and level up. Unfortunately, the results go both ways: When you lose a debate, you lose polling points. Debates take place at designated Electoral Districts, which you’ll then have to defend from other candidates.

Debates will get fairly heated, although they may not stay on topic. Foreign policy, fashion sense, hand size — candidates do what they gotta do to win votes.

In short, Election Go is the fulfillment of every ambitious girl's dream. Not everyone makes it to the White House in real life, but with Election Go, you can get pretty close, without all the sexism that comes with being a lady running for political office. It's a win-win!

To check out more of Downs' work, head over to his website.

More like this
This Viral TikTok Trend is Exposing Everyday Scams
By Sophia Moore
American Girl Doll Memes Are Going Viral On Instagram & Tiktok
By Emma Carey
How To Take A .5 Selfie On An iPhone
By Emma Carey
YouTuber Runs Into Margaret Sanger’s Grandson While Filming
By Alexis Morillo
Get Even More From Bustle — Sign Up For The Newsletter