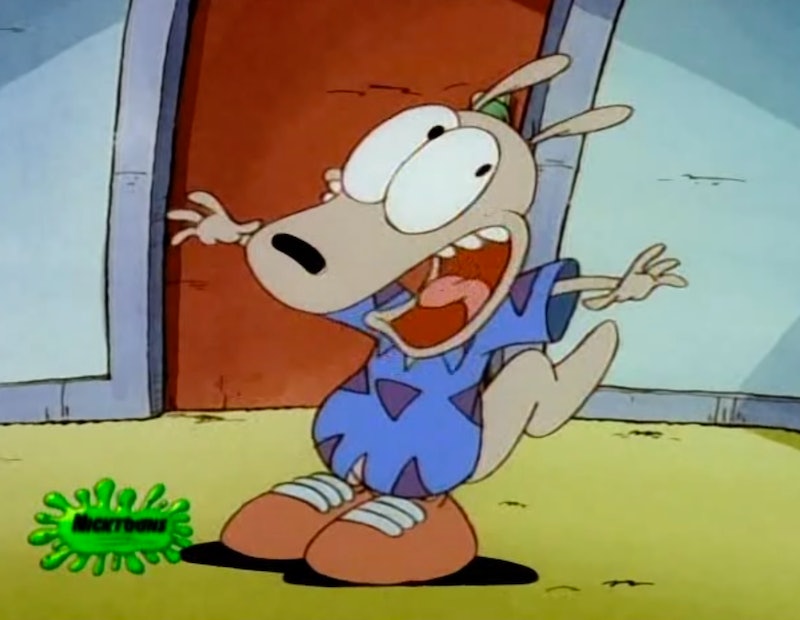 Hindsight is a great thing. Sometimes though, it can also be a terrible thing, capable of ruining your childhood memories from the inside out. Back in the '90s, Nickelodeon was the new, daring kid's station in town. With regular budget restraints to deal with, and a nation full of children to entertain who already had oodles of entertainment options to pick from already, it's no surprise that Nickelodeon's content sometimes veered towards the creepy or the downright weird in eager attempts to innovate.

As a kid, Nickelodeon was the greatest. Finally, it felt like there was a TV station which understood us! What was so great about the station was that it never strived to pander to the same old 'moral of the week' stories that many other channels (like Disney, for instance) did or patronized us with narratives woefully out of step with what kids in the '90s actually got up to in their spare time, cared about or spoke like.

But, wow. Looking back now there were some shows that truly overstepped the boundary between creative and just plain weird. From grown men prancing about suburban neighborhoods in spandex to children being turned into puppets before our very eyes, here are nine of the creepiest moments from our favorite TV station of all time.

1. The Ren And Stimpy Show

As a child I never once picked up on how absolutely horrifying some of the content was. Ren and Stimpy, to me, was just a silly show full of fart jokes, a dopey cat, and an angry chihuahua. But watching it as an adult, some of it is downright chilling. In fact, I can vividly remember an episode as a kid in which Ren has his face grated off by the stubble of a grown man. I thought that was the funniest thing in the world. But now? I'm obviously getting old, because that's some creepy cartoon business happening there.

Other notable creepy scenes involve Stimpy 'giving birth' to a fart which he dotes on as a pet (actually, that's kind of cute, I guess?), Ren pulling the nerve endings out of his toothless gum, and a superhero character called Powdered Toast Man saving The Pope by encouraging him to take refuge in his butt cheeks (fun fact: The Pope later had his name changed in the credits to 'the man with the pointy hat').

Oh man, Weinerville was all kinds of crazy. Based in a puppet town in front of a full studio audience, Weinerville involved the host — a grown man by the unbelievable name of Marc Weiner — portraying a broad cast of characters by placing his head on the top of a tiny puppet. The sketches remain some of the weirdest things you can find on Youtube to this day, but the truly creepiest part came when members of the studio audience (all of which were children, of course) were invited to be put into the 'weinerizer'; a machine which could turn children into puppets. Which, yes, I'm pretty sure there was an episode of Angel which dealt with a very similar dastardly deed. And you know what? Angel kicked those puppet's butts.

3. Are You Afraid Of The Dark

I know what you're thinking; this show was supposed to be creepy, d'uh! And yes, I know. But it isn't the scary stories which strike me as creepy any more when it comes to this show, it's all the nefarious behind the scenes exploits of the Midnight Society which strike me as dubious. I just have so many questions. Like, how did they all manage to sneak out of the house at midnight for their scary story parties without their parents ever hearing them? How did they manage to set up such a fire happy story spot in the middle of the woods without attracting the unwanted attentions of the local partying frat boys? And where did everyone go at the end of those episodes where someone would show up in a clown mask and scare the society off running to nowhere?

More than anything else, Are You Afraid Of The Dark taught us that it was cool to chill in the middle of the woods at midnight with your best friends on a regular basis. I have seen many scary movies and can tell you right now, this is definitely not true.

4. The Adventures Of Pete And Pete

One of my favorite Nickelodeon shows and general TV shows of all freaking time (with the greatest theme tune!), The Adventures Of Pete And Pete was so terrifically offbeat that it will never lose it's spot in the centre of my heart. But can we just talk about Artie: The Strongest Man In The World for a second? It's understandable that Artie was Little Pete's personal hero, after all he could skip stones on Neptune and move an entire house by an inch. But just what business did a grown up have bounding about the 'burbs in a skin tight spandex ensemble whilst hanging out with kids? The greatest man in the World, ever, that's who! But yeah, still a little creepy, by anyone's standards.

5. The Secret World Of Alex Mack

I was never a fan of Alex Mack. Honestly? The whole thing just didn't vibe with me. I remember watching the pilot episode and shouting 'really?!' between mouthfuls of cheesy poofs because I just did not buy the 'special powers' that Mack was bestowed with following her collision with that 'top secret' chemical spill. In retrospect, I was probably right.

So, Alex Mack was a teenage girl, dealing with all the harrowing problems that go with growing up and alongside this she was not only able to turn into a puddle of water but could also shoot bolts of electricity from her fingers? I don't know much about science but I do know that electricity and water make for horrible pals. Puberty plus the always lingering potential for electric shock? That's the real Secret of Alex Mack's World, right there. Scary stuff.

6. Clarissa Explains It All

I honestly don't know where my adolescence would have landed me without the tip-top life guidance of Clarissa Darling, and I say that completely sincerely. Here was a girl who understood the aggravations of having a snooping, snot-nosed brother to live with (I hate you, Ferguson!), how to balance all of life's greatest pleasures like sleeping, shopping and pizza into a pie chart and also the importance of venting your daily angst into creating something like, say, your very own computer game (girl had skills!).

She often broke the fourth wall to speak directly to us — to us, can you believe it? — all about everything. Except, that's kind of lonely, right? I know she had BFF Sam to talk to whenever he felt like climbing up through her window (definitely creepy), but really Clarissa Darling was just a girl, on her own, talking endlessly to nobody. I know you don't want to hear this, but we weren't actually her friends.

I'm going to keep this simple and say that as much as I love this show (Reptar On Ice, forever!) there is something infinitely sinister about the idea of babies being able to actually talk. Plus, how was Angelica, who was old enough to communicate with grown ups, also able to communicate with the babies? It does not make sense.

This show was deep. Deeper than my childhood brain ever realized. Let's quickly skip over the part where the O-Town (the cartoon's setting) had a fast food joint originally named Chokey Chicken (quickly changed because that's basically slang for, well, you're a grown up. You know) along with many other saucy indiscretions and skip straight to the part where Rocko's Modern Life is basically a less than subtle attack on massive corporations. A big old evil company called Conglom-O Corporation sullies the heart of O-Town, and their company motto? We Own You. Their past motto? We Will Own You. Their future motto? We Still Own You. It's creepy because, as we know all too well in a time when the head of a massive corporation is currently vying to become the next US president, Rocko's Modern Life was totally right. And that's terrifying.

As a kid, me and my brother once spent an entire afternoon laughing over the question: Where does Catdog poop? I know, this is real high end stuff you're reading here, but now the question really does trouble me. Silly cartoon for kids or not, where does Catdog poop? These are the sort of questions which spook me late at night when I'm trying to distract myself from worrying about grown up stuff like bills. Please, humour me. Catdog doesn't just upset me because of that though, the eternal anguish of Catdog and of being trapped with someone who we share absolutely nothing in common with (like, say, being trapped in an elevator with Donald Trump) is harrowing. I feel for you Catdog. That show was sadistic.

Still, whether some of these shows fell on the creepy, weird or just plain insane side of things it just goes to show how brave Nickelodeon were in their vision to create content for kids which was out there. And you know what? Kids deserve that. Sometimes a little bit of creepy goes a long way in firing up a young imagination, and it only proves that those kind of judgements make a long, lasting impression way into adulthood.