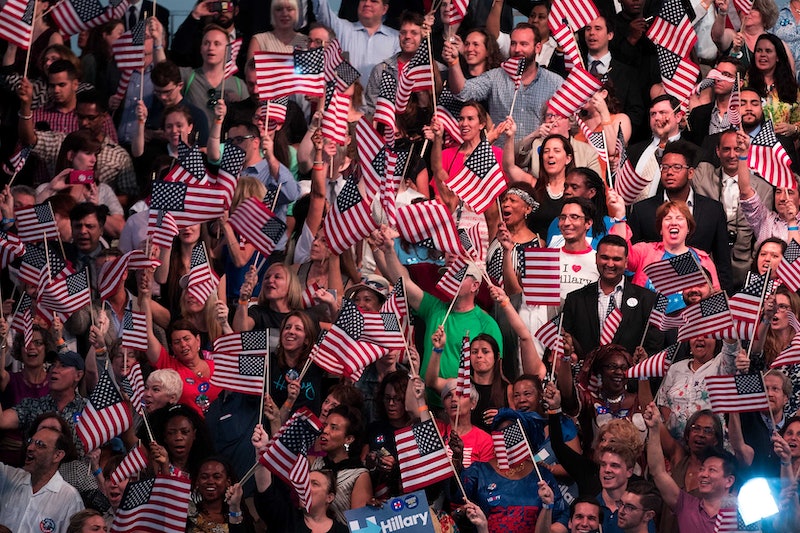 I know, I know. You're sick of hearing people say that "this is the most important election of our lifetime." That's understandable, because everyone says that same thing during every presidential election. It's a tradition that dates back to at least 1856, and it's become such a hackneyed phrase that The LA Times called it "the most overused superlative ever" — and that was 12 years ago, in 2004, during an election that feels positively quaint compared to what's happening now. But regardless of whether or not the 2016 race is the most important one of our lives, there are serious and significant reasons to care about this election, even if you don't normally care about politics.

But those aren't the only reasons 2016 is important. Here are six reasons everybody should care about this election.

One Of The Candidates Is A Fascist

Regardless of how you feel about fascism, Trump certainly fits the definition. When he isn’t advocating physical violence against his political foes and threatening to limit the free press, he’s spreading anti-immigrant sentiment, cozying up to oppressive dictators around the world, using populist left-wing rhetoric to push conservative policies, and pledging to protect America from foreign influence.

The election of a fascist to the White House would have consequences for every American — especially, as I’ve written before, for nonwhite Americans — and that alone is a sufficient reason to care about this election. The Trump campaign has not responded to Bustle's request for comment on whether or not he is a fascist.

There’s A Woman On The Ballot

Clinton is the first woman nominated to head up a major party’s presidential ticket in the U.S., and she’ll be the first female president if she wins. The historic and symbolic significance of that can’t be overstated. And while Clinton’s gender alone isn’t reason to vote for her, this is the first legitimate opportunity Americans have had to elect a woman to the Oval Office.

Even if you couldn’t care less about the presidential race, there are other reasons to pay attention to this election. There will be thousands of state and local elections in November, and they arguably have a bigger, more direct impact on most Americans’ lives than federal ones. California will vote on ballot initiatives to legalize marijuana, repeal the death penalty, and tax tobacco, and five states are considering ballot measures that would raise the minimum wage.

All politics is local, and there’s a lot more at stake in November than the presidency.

I know, I know — the court is cited every four years as reason enough to care about the upcoming presidential election. But even within that context, 2016 is a uniquely consequential election. The next president is already guaranteed at least one Supreme Court nomination, and given that the average age of the remaining justices is near an historical high, they could easily end up naming three or even four justices to the bench.

The Supreme Court matters because it has the power to shape every single area of policy in the U.S. If you care at all about gun control, reproductive rights, Citizens United, or literally any other policy, you should care about the court — and, by extension, the election.

Clinton and Trump supporters, for all of their differences, are in broad agreement that this is an election of enormous historic significance. Harvard lecturer Yascha Mounk even argued that the 2016 election could well become a turning point in world history.

If that’s the case, “Who did you vote for in 2016?” will undoubtedly be a hot topic of conversation for decades to come. And you probably don’t want your answer to be, “I wasn’t really paying attention that year.”

From a foreign policy standpoint, one of the candidates would likely uphold the status quo and maintain the broad geopolitical course the U.S. has taken since the end of World War II. The other candidate has pledged to reshape America’s role in the world by questioning America's commitment to NATO, pursuing a mercantile trade policy, and openly pondering the use of nuclear weapons in Europe.

The merits of these two worldviews are debatable. But they are two starkly different worldviews — and when it comes to nuclear weapons, everybody on the planet should care about who has their hands on that trigger.