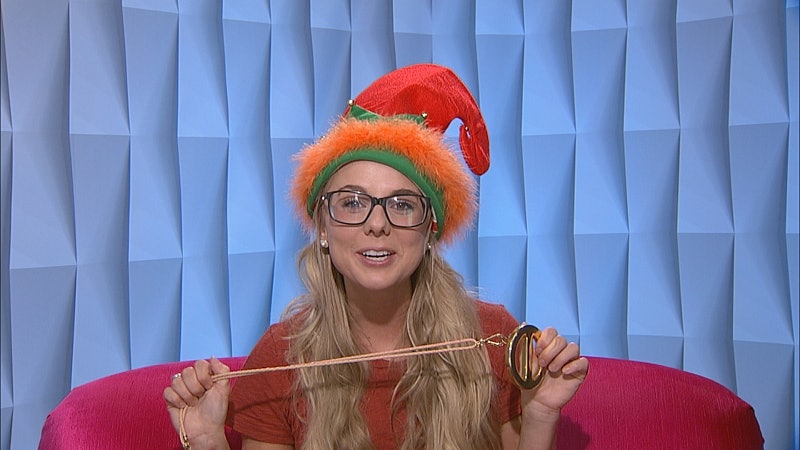 I've got to be honest: I think Nicole could win Big Brother 18. Nicole has consistently been, as she likes to put it, "playing Big Brother," which roughly translates to her having consistently had her eye on the prize. Additionally, she is the only player still in the game that has never been on the block. Yes, you read that right. Nicole has gone this entire season without a chance to sweat out her fate. And in case you needed any further proof she could seal the deal, I'll remind you that this isn't her first rodeo. Nicole is a vet and that means she has been playing the game long before she entered the Big Brother 18 house. Now, as the show winds down, Nicole is poised to at least make it to the final two but she could also become the next Big Brother winner.

Nicole's biggest asset in this game has been her ability to strategize. While she may have come into the house trying to avoid a showmance, we all know that wasn't the case for very long. After a few weeks, her old Big Brother beau Hayden was a thing of the past; it has been all about Corey during Nicole's second stay in the Big Brother house. As far as gameplay goes, the showmance angle straddles the line between strategy and sore spot. Often, falling for a fellow houseguest means making yourself emotionally vulnerable (not only to the other person, but also to the schemers in the game). However it has been Nicole, ever the mastermind, has been able to not only keep her alliance strong with Corey, she's been able to develop a strong relationship with him, too. Who would have though that a showmance could wield such a protective shield?

But relying on Corey has not been her sole modus operandi. Despite being frequently called out for her perceived shadiness, Nicole has often benefitted from pitting houseguests against one another. Sure, it can be a bit of a sly move, but that how you play the game. Right? Nicole knows perfectly well that friendships, showmances and fun are all well and good but the real game is in the dropped hints and strategic rumors. She has consistently been a player who has made big moves and kept the game interesting.

Nicole knows exactly how to maneuver her fellow houseguests around the Big Brother chessboard and it's worked to her benefit. Even during Sunday's episode, we saw her plotting with Corey, watching James on the TV and secretly egging him to come to the Head of Household room to plot out the next steps. She can read people like a book and exploit that knowledge to her advantage. After weeks of playing mind games with her housemates and securing safety through alliances, Nicole's hard work is paying off. In the last two weeks alone, she has been in big alliances that have allowed her to fly under the radar and play a strong game.

If her strategizing does secure her a place in the final two and —fingers crossed—a win, then she could be one of only a handful of women who has won the series since it first began. That is a major superlative to secure. Amusingly, she's already earned an endorsement for her friend and former Big Brother winner, Andy Herren. It seems speculative to call it now, shouldn't we be rewarding the players who actually play the game?I know Nicole has been a bit of a polarizing force this season. Honestly, if this is about playing a game and taking names along the way, Nicole's got it made. She not only needs to win, she deserves to win.