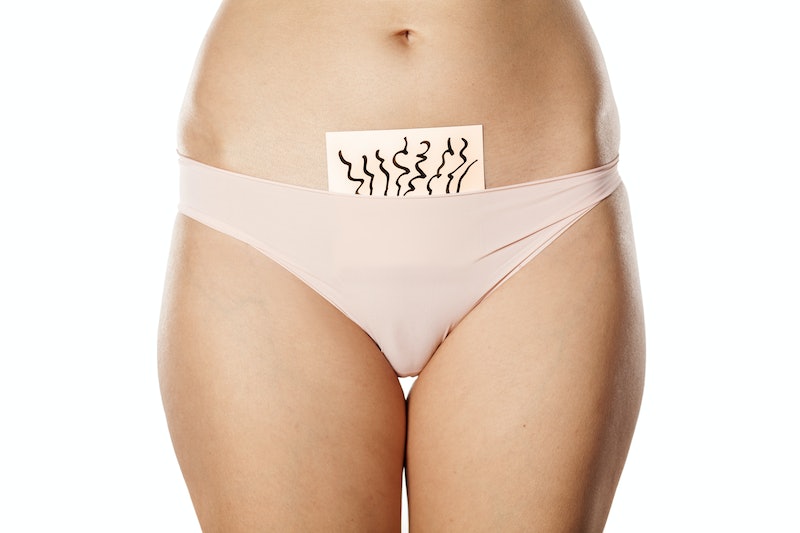 Your pubic hair has more power than you might think. It can protect you against infections and rashes, ward off STDs, and even help you get better access to your clitoris during a steamy sexual encounter. However, the world sends women a different message about pubic hair. Anytime you see a nude woman in porn or the movies, she's either got a smooth playing field or very, very trimmed hair. Similarly, if a woman is wearing an itty-bitty bikini in an advertisement, there's no way in hell you'd ever see any stray hairs poking out from her bathing suit bottoms. We simply live in a world where pubic hair is deemed unnecessary at best, and disgusting at worst.

It's not that there's anything inherently wrong with being hairless, but the problem is that many women now think it is the only "normal" and healthy option. Bustle spoke with researchers at Clue, an app that tracks your period and ovulation, who have studied why women are opting to get rid of their pubic hair. One researcher, Claire McWeeney, tells Bustle that media messaging and advertising show women "using products such as razors, hair removal creams, and waxing strips on already hairless skin — as though a woman’s natural state prior to hair removal is not something that should be seen." It's no wonder we've learned that pubic and body hair on a woman is unacceptable.

Of course, we're not demanding that all women to grow out their pubes in a unified stand against patriarchy (although that would be kind of cool). Rather, we need to set the record straight. There are some things about your pubes you simply need to know so that you can make an educated decision on what to do with them (or not do with them).

Here are five facts about pubic hair that you should know so that you can decide for yourself.

1. There Are Many Health Benefits To Having Pubic Hair

"Pubic hair serves as a protective barrier to genital tissues and the sensitive vaginal opening," McWeeney says. This prevents the bad bacteria from getting inside of you and causing an infection. Not only that, but pubic hair also acts as a barrier to friction, making it less likely that you'll feel sore after a particularly vigorous sesh in the sack.

Pubic hair also helps protect you against STDs that are spread by skin-to-skin contact. If you leave your pubic hair intact, you reduce your risk of micro-tears on your skin, meaning there's less of a chance that you'll contract human papillomavirus (HPV), genital herpes, and a skin infection called molluscum contagiosum. Continuously remove your protective pubes, and you might be upping your chances of contracting an unwanted STD.

The health benefits of pubic hair are numerous, and you can read about all of them in more detail here.

2. ... Yet Most Women Incorrectly Think Waxing Or Shaving Is More Hygienic

Even though there's a long list of hygienic benefits to having pubic hair, society has taught us that the less we have, the better. A study published by JAMA Dermatol actually showed that 59 percent of women who groom their pubes think doing so is the most hygienic choice for their vagina (while only 31.5 percent claimed it was for looks). Not only do we think it's aesthetically pleasing, but we've somehow been duped into thinking stripping ourselves of pubic hair is a healthy choice for our bodies.

Experts are trying to convince women otherwise, though, because there's really nothing hygienic about a woman waxing off her pubic hair — in fact, it's just the opposite. Which brings us to...

All we're shown in ads is smooth, flawless skin, but the reality is that you can seriously hurt yourself if you flippantly wax or shave the wrong way. "People who do choose to remove their pubic hair also run the risk of injury," McWeeney tell Bustle. Because people don't realize this, more women than ever before are showing up to the hospital with pube-related injuries. Between the years of 2002 and 2010, the number of visits to the emergency room due to pubic hair grooming grew five-fold; 83 percent of these injuries were due to razor use, and the most common site of injury was the external female genitalia (ouch!). Clearly, there are way too many women who are trying to remove their pubic hair at home and who are subsequently harming themselves.

4. Women Who Receive Head Regularly Are More Likely To Get Rid Of Their Pubic Hair

Naturally, one of the things we think about when we decide what to do with our pubes is who or what is regularly coming into contact with our pussy. A study published in JAMA Dermatology shows that women who are having sex and receiving oral sex regularly are much more likely to groom their pubic hair. The same survey found that most of the women who chose to get rid of their pubic hair had partners who preferred less hair down there.

Clue researchers believe this expectation has a lot to do with the cultural standard of beauty we're presented with. The fact that we never see pubic hair anywhere "may be contributing towards a self-consciousness around pubic hair that leads women to remove it." Unfortunately, this societal standard has made many men partial to hairless vulvas, so most of us have encountered a guy (or two) who has urged us to get waxed. Even if you've heeded their requests before, now is a good time to understand that any guy who tries to tell you what to do with your pubes isn't worth your time. If your partner is just expressing their preference, however, here's how to negotiate that sensitive conversation.

5. Some Methods Of Hair Removal Are Safer Than Others

If you're one of those women who has tried on both hats and prefers having no pubic hair, more power to you. But make sure you're going about your removal process in a smart way; the last thing you want is to face cuts, wounds, or abscesses because you made some basic waxing mistakes. If you're shaving, make sure you're using a brand-new, clean razor to prevent razor burn. If you'd rather wax, just skip the at-home kits and opt in for a professional's touch. Finally, your best bet is to avoid depilatory creams at all costs, since these products can burn your skin.

When you're prepping for a hair removal sesh, the team at Clue recommends you exfoliate prior to doing anything else. "Exfoliating using a gentle scrub beforehand will remove dead skin cells and reduce the chance of [ingrown hairs] developing," McWeeney tells Bustle.

And when in doubt, ask questions. Google any inquiries you may have, chat with a medical provider, check out this article about how to hygienically groom your pubic hair, and read up on all the reasons to consider rocking a full bush. Your pubes deserve the very best treatment, no matter what you choose to do with them.