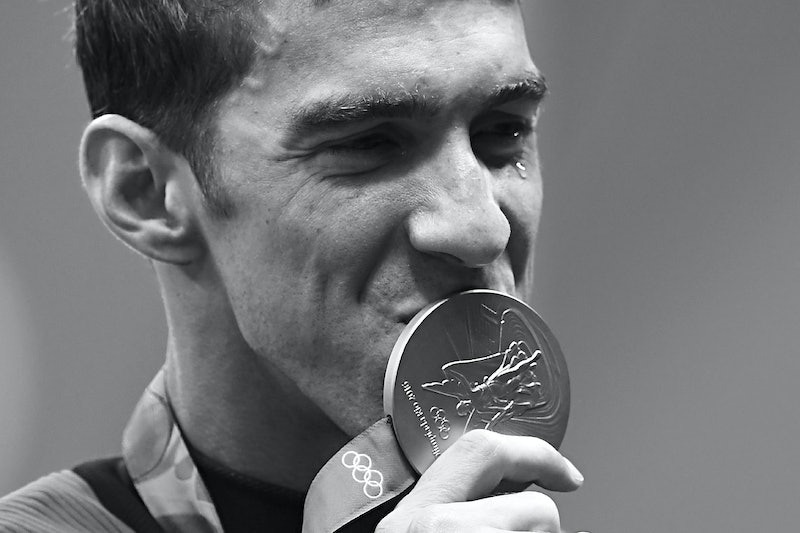 Following on from his amazing performance in Rio 2016, Michael Phelps appears to have brought his winning-streak home with him. Not content with his collection of Olympic gold medals, Michael Phelps performed on Lip Sync Battle: All-Stars Live , and claimed gold again with his rendition of Eminem's "Lose Yourself." Despite having fierce competition from the likes of John Legend and Olivia Munn, Phelps proved exactly why he's such an impressive competitor wherever he goes. As the show was live, the competition was decided via a viewers' votes, and it's hardly surprising that the swimmer's take on the Eminem classic put him into first place.

As it was the first episode of Lip Sync Battle to air live, the show contained several special guests and surprises. Fellow Olympians Simone Biles and Aly Raisman made a spectacular entrance during Olivia Munn's performance of "Cheap Thrills" by Sia, and Phelps was clearly thrilled to share the stage with the fellow athletes. After their performance, which involved them both being lowered from the ceiling on hula hoops, Phelps said, "That was awesome. I loved being on the team with these girls and seeing them perform is so special." Phelps is gracious even when facing some tough competition, and it was awesome to see the series celebrate Team USA in such a fun way.

The reason that Phelps beat out his competition on Lip Sync Battle: All-Stars Live, is likely down to his commitment to the source material. The swimmer worked hard to embody Eminem, from the hooded sweatshirt and Timberlands that he was wearing, to the set where his performance began, featuring walls covered in graffiti and a mirror, so that he could rap at his own reflection. With so many references to the movie 8 Mile, the soundtrack of which features "Lose Yourself," Phelps worked hard to emulate the iconic rapper's persona, whilst also making the track his own. His performance was nothing short of hilarious, and clearly most of America agreed.

The live episode of Lip Sync Battle worked so well, and will hopefully be the first of many. It's always fun to see Phelps enjoy his successes, and as fellow athletes Biles and Raisman appeared on the show too, it was the perfect celebration of everything Team USA achieved in Rio 2016.