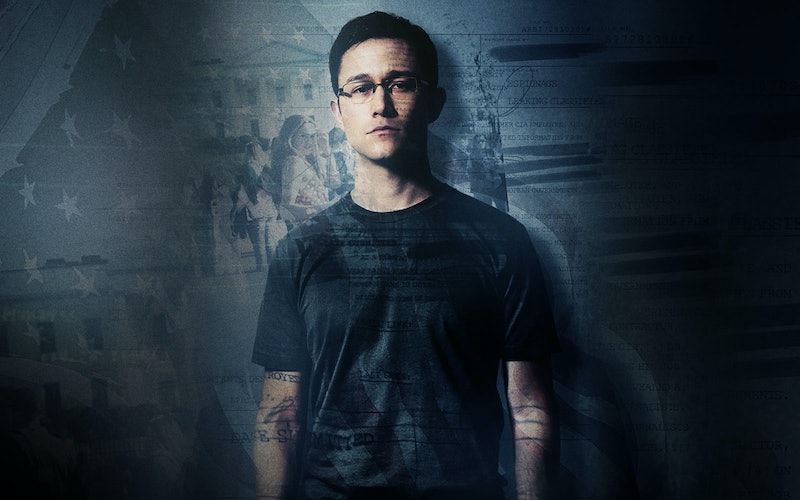 He was already one of the most notorious figures of the 21st century and the subject of an Oscar winning documentary. Now, former National Security Agency employee and whistleblower Edward Snowden is the center of an Oliver Stone feature. Snowden debuts in theaters Sep. 16 and stars Joseph Gordon Levitt as the controversial American. Stone has earned his reputation helming dramatic biopics, with subjects ranging from Jim Morrison to George W. Bush. In this case, the director was able to consult with his lead character, albeit in not the most convenient matter. Snowden is living in Russia since he's wanted for espionage and theft in the United States. Stone told The Hollywood Reporter that an initially reticent Snowden agreed to participate in the film when "he accepted in his heart that a movie would get made" whether he was involved or not. Stone confirmed that the exile was not granted script approval or any payment. Now that the film is finished, what does Edward Snowden think of Snowden ?

As befits a film about the exposure of classified government documents pertaining to citizen surveillance (which is heroism or treason, depending on your view), the Snowden screening at this July's San Diego Comic-Con was top secret and by invite only. The Guardian reported on the post-show Q&A, which included a surprise satellite appearance by Snowden himself. "This is one of the things that’s kind of crazy and surreal about this kind of experience," Snowden said. "I don’t think anybody looks forward to having a movie made about themselves, especially someone who is a privacy advocate.” Though that irony is probably obvious from space, the whistleblower also told the audience that he hoped a more stylized version of his story could capture the interest of citizens better than he believes himself capable of doing. "I’m not an actor. I don’t think anybody in politics is charismatic enough to connect with people on these issues," he said.

According to The Guardian, Snowden was directly asked to comment on the performance of Gordon Levitt after the screening. "Some of my family members have said, 'He sounds just like you!'" Snowden explain. "I can’t hear it myself but if he can pass the family test he’s doing all right.” The actor told Vanity Fair he achieved that mimicry through repetition. “I ripped the audio off of the [Snowden] documentary Citizenfour and just put it on my headphones on repeat," Gordon Levitt said.

But none of these Snowden comments are a solid verdict on the film. Is there one? Stone told The New York Times that his subject "liked" the film. The Financial Times asked Snowden to rate the movie on a standard scale of ten, but he refused to do so. "On the policy questions, which I think are the most important thing for the public understanding, it’s as close to real as you can get in a film," Snowden offered.

Snowden 's subject also spoke about the strange experience of seeing himself through the eyes of others. "There’s always going to be something emotional about seeing something that you did retold as a story by other people," Snowden told the Financial Times. "It shows a reflection of how your choices matter to them. Three years later, seeing what we thought was going to be a five-day story still being reported on [makes me think] that I wasn’t crazy."

With Snowden still exiled to Russia and questions of security and privacy being a part of a national conversation, it's clear that the Snowden story is still not over.