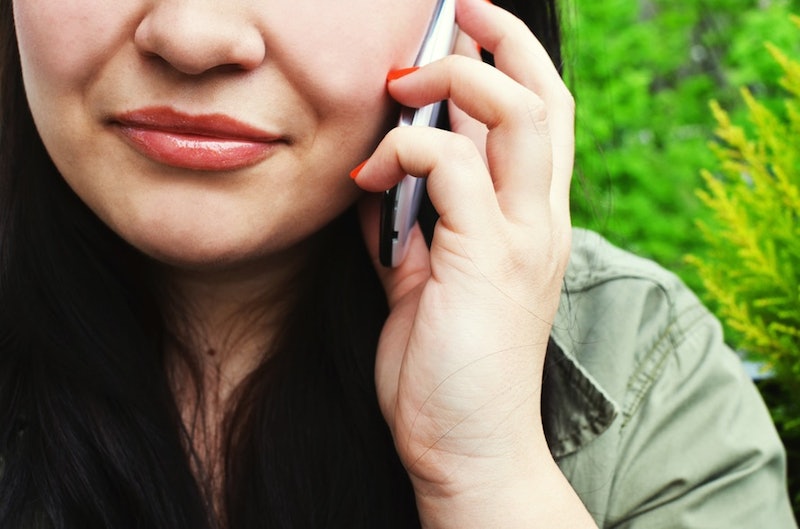 In which of the following scenarios would you call your parents? A) there's a bug on the ceiling and it's scary, B) you had a great lunch and need to tell someone, C) you're mad and would like to vent, or D) all of the above. If you answered D, then you most likely need to talk to your parents less often.

As someone who calls my mom all the time — often about bugs, or my great lunch — I totally understand the draw. Your parents love you, they're full of wise advice, and they almost always want to hear about your day. It makes picking up the phone mighty tempting.

So I'm definitely not saying you shouldn't give your parents a ring. Call to say hi, call to check in, and by all means call if something goes wrong. I'm sure they'll be more than happy to chat, or to come to the rescue.

Calling your parents only becomes an issue when the habit gets out of hand. "If you are talking to them everywhere or several times a day, that is a problem," says Nicole Martinez, Psy.D., LCPC, in an email to Bustle. Maybe you call when you're bored, or because you need "help" making a mundane decision. These are the times when it's better to strike out on your own, trust your gut, and follow your own instincts — lest you become too dependent. Read on for signs that that could definitely be the case, and that it's time to chat a little less often.

1. Making A Decision Is A Whole Thing

It's one thing to ask for your parent's advice when choosing a car, or deciding on a grad school. But if you call your mom and dad because you can't decide what to eat for dinner, it could be a sign that you lean on them a bit too much. As Martinez says, "You are co-dependent, and need to learn to have faith in yourself and your decisions." Try it out by not racing to the phone, and instead making a choice all on your own.

2. The Conversation Always Turn Into An Argument

There are a million reasons why crankiness can crop up while talking to your parents — they're stressed, they're tired, they wish you'd deal with things on your own. Whatever the case may be, some phone calls home can dissolve into arguments. If that happens more often than not, do yourself a favor and call less often. One of the luxuries of being an adult is you don't need to be weighed down by anyone else's crap.

3. You Only Call Because You're Worried

Of course there are situations when the roles reverse and us kids have to play caretaker. If your parents are sick, or they're in some trouble, then you'll be the one rescuing them. But calling your mom 24/7 because you don't think she can take care of herself will only create strain (and resentment) in your relationship. So let her be.

4. You Don't Trust Your Own Opinion

If you turn to them for their advice on anything and everything, it could be a sign that you don't trust your own opinion. This is probably because — knowingly or otherwise — your parents have mettled for so long that you don't even know what your own opinion is. "So let yourself try what feels right for you, and don’t worry about making the 'wrong' decision," suggested self-help author Esther Bautista on TinyBuddha.com.

5. Your SO Finds It A Bit Strange

Everyone has their own opinion about how often they should or should not chat with their 'rents. If your SO never talks to theirs, they might view the constant phone calls as a bit strange. And, they might have a point. "This might pose a big red flag for the person," Martinez says. "They may view it as unhealthy or intrusive. They might feel like they will always be number two, or that you do not value their opinion." Whatever's concerning them, it could be a sign you should step back.

6. They Are Meddling In Your Business

OK, so what if you aren't the one always picking up the phone? If your parents are the ones ringing on the regular, it may be time you set them straight. Ask them to give you some space, and to respect the fact that you're a real adult. Then, set boundaries by arranging a call each week at a mutually convenient time, as suggested in an article in Reader's Digest. It'll let them know you're alive, while also giving you some space.

7. You Call Every Time You Feel A Feeling

Again, don't feel bad for doing this, because calling home when you're sad is the most natural thing in the world. But there is something to be said for handling upsetting situations all on your own. As Karyn Hall, Ph.D, said on Psychology Today, "... self-soothing is a basic skill important for emotional and physical well-being."

8. They Shake You Down For Money

You should talk to your parents less often if they are overstepping certain boundaries, and money is definitely one of those boundaries. Every family is different when it comes to this topic, but generally speaking you shouldn't be shelling out dough to needy parents on the regular. If your parents are constantly "borrowing" money, don't be afraid to give yourself some space.

9. You Only Call Out Of Guilt

As far as child/parent struggles go, feeling guilty for not spending time with them is right at the top, according to Jonice Webb, Ph.D., on PsychCentral.com. It's totally normal, so don't let that be the reason you're constantly giving them a call. It's OK to go off, do your own thing, and be a separate entity. I promise.

10. Calling Is A Knee-Jerk Reaction

Remember what I said about that bug on your ceiling? Well, when you're freaking out, it's very easy to call for the person who has rescued you from such calamities in the past. And yet there's something to be said for taking a pause and handling things on your own. So if you think you call your parents out of habit — and not because you actually need them — it may be time to ease up.

11. You Only End Up Being Rude

Snapping at your mom and dad is another struggle of the kid/caretaker dynamic, according to Webb. This is usually due to something called "individuation." This is "the natural, healthy process of the child becoming increasingly separate from the parent by developing his or her own personality, interests, and life apart from the parent," Webb said. So go ahead and let it happen.

Call your parents. Stop by. Have a close relationship. But strike that healthy balance. As Martinez says, "It enables you to stay connected, but also stand on your own two feet."