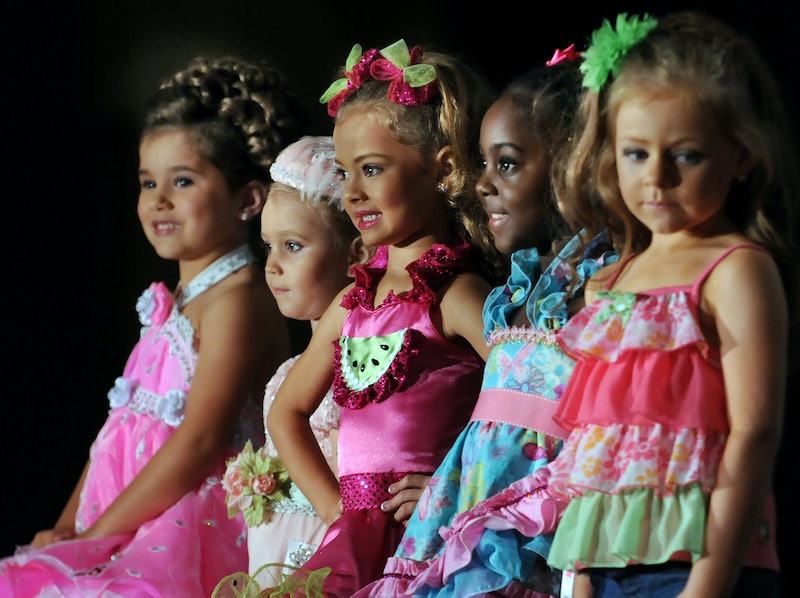 Whether you're a true crime fanatic who's been watching all of the recent TV specials about the JonBenet Ramsey case, a former child pageant competitor yourself, a relative of one of the 250,000 children who compete in 5,000 pageants nationwide each year, a dedicated Toddlers and Tiaras viewer who wants to know exactly when we as a society decided it was permissable to baste an elementary schooler in self-tanner, or simply someone who saw the headline of this piece and wondered, "Yeah, what is the deal with those?" the question of how and why child pageants came into existence is probably not something you know much about — a situation we're about to remedy! Don't worry; it's interesting (and involves a cameo by Thomas Edison, plus way more eugenics theory than you may have guessed...or maybe not!).

Beauty pageants for adult women have existed, in one form or another, for centuries; for example, medieval Brits celebrated May Day by picking a May Queen. The first organized proto-child pageant, however, occurred around the same time as the first pageant for adult women — and was actually more successful. Famous circus entrepreneur, businessman, huckster, and all-around exploitation artist P.T. Barnum organize America's first beauty pageant for adult women in 1854, which failed due to public protests that the contest was immoral. But in 1855, a national contest Barnum orchestrated, called the "National Baby Show," attracted 143 child contestants and 61,000 viewers. "Baby parades" soon became a national sensation — in 1893, one in Asbury Park drew 30,000 spectators, and in 1904, Thomas Edison chose the event to be the subject of one of his first films, which would actually make him the first executive producer of Toddlers and Tiaras.

In the following decades, adult beauty contests picked up steam — first as newspaper-based contests where contestants could submit a daguerreotype of themselves that would then be judged by readers, and then, starting in 1880, in the form of "bathing beauty contests" in seaside towns. Baby contests marched along, as well — and a new string of competitions, which were called "Better Baby Contests" and usually held at state and country fairs, sought to measure the "health" of the babies in competition, and were primarily an effort of educate parents on new ways to raise and protect their children. Of course, it wasn't just about spreading health information —I mean, this is America! the parents of the winning baby also won cash prizes.

Better baby contests caught on throughout the beginning of the 20th century — according to a publication from the era called Woman's Home Companion , which played a major role in the competitions by helping develop a standardized scoring system, all but three states had held better baby contests by 1915, and the contests had had more than 200,000 competitors aged six months to five years. According to an article by Hilary Levey Friedman on the Huffington Post, "Annette Dorey, an expert on baby contests, explains that at each better baby event, babies were stripped naked and then judged by physicians according to a 'meticulous point system like that used in cattle judging'.”

And what exactly separated the better babies from the simply OK babies? According to William S. Powell's Encyclopedia of North Carolina :

Sometimes these baby contests were accompanied by "fitter family competitions," which allowed the whole fam to participate in the joy of having their bodies judged by strangers.

Do historians believe that these better baby contests had anything to do with eugenics? You know it! According to Martin S. Pernick's "Taking Better Baby Contests Seriously," published in the May 2002 edition of the American Journal of Public Health, the contests promoted "selective pronatalism" and "fitter family competitions simultaneously demonstrated who should and who should not reproduce." Fun for the whole family!

Better baby contests ended in the 1950s, as did baby parades — the era's fears about the spread of polio made events where large groups of children congregated in public taboo. But don't worry! The polio vaccine became widely available in the late '50s, and wouldn't you know it, by 1961 the youth of America were healthy enough to participate in the country's first official child beauty pageant! Palisades Amusement Park in Palisades, New Jersey, held a weekly contest throughout the summer, from 1961 to 1971, called "Little Miss America" (a name that invoked the adult Miss America pageant, which had been running since 1921, but was not actually affiliated with it), which drew roughly 6,000 competitors each week.

The wild success of the Little Miss America pageants did not go unnoticed by entrepreneurs/ people who liked money across the nation; and regional child beauty pageants began to spring up. Unlike Little Miss America, which was free to enter and had no dress requirements or talent competition, these competitions mimicked adult pageants, offering contestants the chance to compete in categories like "talent" and "party wear" (the children's equivalent of evening wear, I assume, because children's evening wear generally consists of pajamas with some kind of giant, comical dog on them).

These pageants developed into the myriad children's pageants we know and tolerate today. Are they harmless fun or thoroughly reality-warping for the kids who participate in them? That's not for me to say (I spent my own childhood playing Ouija board by myself and talking to my American Girl dolls out loud, so Miss Low-Key Benign Parental Neglect would probably have been the only pageant I was qualified to compete in). But if you want some first-person perspective, I recommend Laura Goode's piece for The Cut on the adult lives of six child pageant winners.

And if you take away only one thing from this article, I want it to be this: child pageants aren't a new innovation, tied to some vague modern societal malaise; the urge to have a stranger declare your child cuter than another person's child has been with us for a long, long time.

Oh, and also that Justin Timberlake competed in the 1992 International Supreme King pageant: