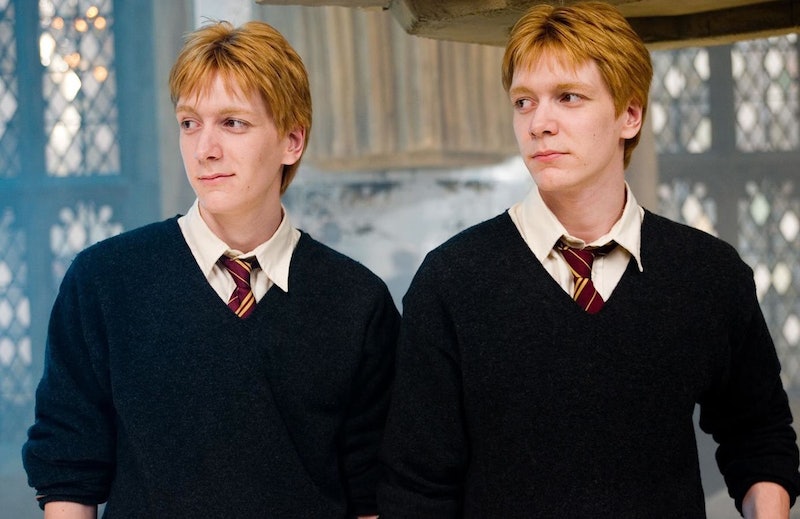 Everyone has a favorite Harry Potter character, one they obsess over, look up to, wish they could be best friends with, and even fantasize about dating IRL. But no matter who your favorite character is, whether it's a member of the Golden Trio or a leader in the Order of the Phoenix, you can't deny the number of times you fell in love with George and Fred Weasley. Between their dashing (and matching) good looks and their undeniable charm, these twins are simple irresistible.

Two of the seven Weasley children, George and Fred are the older brothers you actually wish you had growing up. Not only are they the most fun and hilarious twins to walk the fictional planet, but they have a sweet and sensitive side, too. They're the perfect pair to recruit if you need a good laugh or a way to get out of class, of course, but they're there for you during the seriously hard times, too. Fred and George are who you call for a listening ear — literally and figuratively — or a shoulder to cry on, someone to cheer you up or help on your next prank. They're pretty much the best characters ever, and there's simply no denying it.

There are plenty of lovable characters in the Harry Potter series, but no matter who is your favorite, you can't forget about these 14 times you fell in love with George and Fred Weasley. The real question is, which of the twins is your favorite?

1. When they switched places as a prank.

Everyone loves a good twin joke, am I right? Well, maybe not Molly Weasley.

2. Whenever they wore matching outfits.

Which was a lot.

Whether on purpose or by chance, whenever George and Fred spoke at the same time, you swooned, admit it.

4. When they helped rescue Harry Potter from the Dursley's.

As if they didn't have enough siblings to take care of, Fred and George always treated (and protected) Harry like a little brother.

5. When they recruited Peeves for help.

“ 'Give her hell from us, Peeves.'And Peeves, whom Harry had never seen take an order from a student before, swept his belled hat from his head and sprang to a salute as Fred and George wheeled about to tumultuous applause from the students below and sped out of the open front doors into the glorious sunset.”

George and Fred were a pretty incredible pair on their own, but when they combined forces with the likes of the school's most mischievous ghost — now that's some serious pranking.

6. When they passed on the Marauder's Map.

Sure, they memorized all the passages first, but it's the thought that counts, isn't it?

7. Whenever they told a twin joke.

“Fred and George turned to each other and said together, 'Wow, we're identical!''I dunno though, I think I'm still better looking,' said Fred, examining his reflection in the kettle.”

Sure, twin jokes are the most obvious kind of joke, but when Fred and George tell one, it's actually pretty funny.

8. Every time they tried to break the tension.

And trust me when I say, there was plenty of it to try and break. Whenever things got a little awkward or the room felt too tense, you could always count on George and Fred to come up with a quick quip or a fun joke to lighten the mood.

9. Every time they're brutally honest.

" 'I was a fool!' Percy roared, so loudly that Lupin nearly dropped his photograph 'I was an idiot, I was a pompous prat, I was a - a -'

'Well, you can't say fairer than that," said Fred, holding out his hand to Percy.' ”

If someone needed to be told the harsh truth, the Weasley twins were there to tell it — especially to their siblings.

10. When they interrupted end of year exams.

Any student who has sat through finals has imagined doing the exact same thing. The only difference is, George and Fred were badass enough to do it.

11. When they followed their dreams.

It takes grit and guts to start a business of your own, but luckily, George and Fred had plenty of it. They're wizarding shop is an inspiration to readers who have big dreams on their own.

12. Whenever they tried to flirt.

How could you resist their matching red-headed charm? Answer: you can't.

13. When they found humor even in the darkest of times.

By the end of the series, Harry Potter got pretty dark — friends died, good guys turned evil, evil came into power — but through it all, Fred and George had jokes for every situation. They became the light, even in the darkest times.

14. When they got the chance to grow old together.

Although they didn't get to do it in real like (RIP Fred), thanks to their cleverness and trickery, George and Fred did get this one memorable moment to grow old together.

More like this
Idris Elba & Tom Hollander Lead This Year’s Must-Watch Christmas Flick
By Maxine Harrison
'Bridgerton' S3 Teases Exciting Social Season For Penelope Featherington
By Bustle
The 'Firefly Lane' Book Ending Teases Way More Tears To Come In 2023
By K.W. Colyard
The 'Lady Chatterley's Lover' Book Leaves Us With A Troubling Question
By Catharina Cheung
Get Even More From Bustle — Sign Up For The Newsletter